Rory McIlroy’s first round at Royal Portrush was a gift for his 10th birthday. The course is about an hour’s drive from where he was raised in Belfast. He’d seen his father play there.

At 16 years old, he set the course record here – a remarkable 61. As the course has since been redesigned, it will stand forever. McIlroy claims to still remember every one of those 61 shots.

If we were making a movie about his career, that’s where it would start. What’s happening right now would feature somewhere near the denouement.

McIlroy, 30, has been a prodigy and the next big thing. He’s been a failure and a major champion. In between he’s helped sell a lot of clubs, though less than had been hoped.

The Golf Industrial Complex wanted McIlroy to be the next Tiger. Instead, he’s a Tom Watson or a Seve Ballesteros – a star, but no more or less than a half-dozen of his peers. He hasn’t transcended the sport.

The only place where what McIlroy says or does really matters is on this island. That hasn’t rested easy with him. He is a Catholic which, in these parts, makes you more Irish than British. McIlroy spent his 20s dodging questions about his loyalties. That hasn’t stopped people from assuming the answers.

From the outside, it’s assumed that McIlroy is an avatar of this nation, of its people and of this specific place. He is, but not in the “isn’t-it-cool-to-be-a-Canadian-playing-in-Canada” way that we take for granted. It’s something much heavier and more freighted with history.

To be “from” somewhere in Northern Ireland is a complicated business. You are from a city or a county, but not really. Where you’re really from is a block on a particular estate in this section of which end of that city. Belonging is highly localized. That’s what happens when everyone looks the same.

You can’t make up where you’re from or move on because your accent – something that can shift perceptibly (to natives, at least) in the space between two bus stops – gives you away. You’re from where you’re from, forever.

McIlroy has played Portrush, loves Portrush, feels he was weaned in Portrush, but he is not “from” Portrush. While trying to be breezy about all this attention, he was at pains to get that clear on Wednesday.

“Portrush has been – the golf club at least – has been a very big part of my upbringing,” he said.

It’s not hard to imagine that McIlroy’s connection to this place is a large part of what made returning the British Open to Northern Ireland possible.

It’s certainly a significant part of the interest in this tournament. It’s what makes this occasion so romantic, in the soggy, sitting-by-the-fire way Ireland does better than anywhere.

The frenzy is so high that people have paid much as $800 a night for ‘luxury’ tents a 25-minute walk from the course. Those 25 minutes will seem like 25 hours when the rain is coming in hard, as it was Wednesday.

“It’s a warm rain,” a gentleman named Nigel explained to me, lest I be afraid.

The Irish have a lot of words for rain – misting, spitting, bucketing, pelting and you most definitely should stay home when it’s hammering – but there is no such thing as a “warm” rain. At least, not once you’ve been out in it for as long as it takes to come up through the soles of your shoes.

Someone I know from this part of the world sent along a note hoping I’d be lucky enough to “experience all five seasons in a day.”

“The fifth is always a surprise.”

That’s hard to pack for.

Amid all that charm, there’s McIlroy. He’s not particularly charming. He’s spent years living in the United States. His accent has flattened. From the look to the idioms, he strikes you as more transcontinental than Irish.

He’s one of those Davos types – a high-earning, rootless citizen of the world. A global salesman.

It’s only in golf that a player can truly be said to “come home.” A goalie from Mississauga may end up on the Toronto Maple Leafs, but he didn’t grow up playing house league at Scotiabank Arena. McIlroy learned golf in this place. By our standard, he’s playing in his backyard. Any North American athlete would be making an absolute meal of this – out on the town and selfies for days.

Though he has the history, McIlroy seems a little light on stories. Mostly, he talked about the golfing considerations – what the wind does, where to aim at the second hole, why you should trust what you know rather than what you see. There was nothing about the place itself. You could feel his discomfort in this regard.

When asked how it’s been to be out and about in Portrush over the past couple of days, McIlroy said, “To be honest, it hasn’t felt any different than any other Open Championship.”

It sounds like the wrong answer, but it is the correct one if you don’t feel you have the right to speak on behalf of this place. And to say something like, “I’M THE PRINCE OF THE CITY,” would sound uppity, which is seriously not on in Ireland.

That’s a lot to ask from a diplomat, never mind a golfer.

Then, as it had to, the news conference on Wednesday turned treacly – to the meaning of this event and its legacy and what it’s all about, really. Not the Open. Life.

Now drawing on his adult experience as a man of the world rather than his childhood one as a kid from Belfast, McIlroy was more comfortable. Two ideas console people in that larger arena – that we are all the same, and that the magic of free-market forces will protect us from harm.

A couple of questions later, he was really warming into it.

“Forty years on, it’s such a great place, no one cares who they are, where they’re from, what background they’re from, but you can have a great life and it doesn’t matter what side of the street you’re from.”

It’s probably a bit easier to have a great life when you’re worth a hundred-million bucks, but he has every right to his lived experience.

But in speaking this way, McIlroy was solving a problem. He was showing well for the country, but in terms so non-specific they cannot possibly offend anyone. It was a diplomat’s answer. It’s the sort of answer that looks great in promotional material. So, landmines avoided and mission accomplished.

The second part of McIlroy’s job is easier. All he has to do is win a golf tournament. 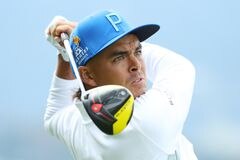 Tiger’s not entirely out of the woods yet, even with another green jacket and a Presidential medal
June 13, 2019 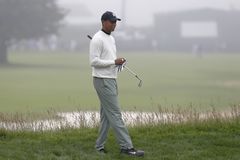