Matt Kuchar is playing his 54th major championship and realized something new as he walked off the 18th green at Bethpage Black.

“I think this is the first time I’ve worn a beanie at the PGA Championship,” he said Monday.

Tiger Woods was layered in clothing for an early nine holes of practice to beat the rain, with a knit beanie over his cap. From a distance, it was hard to distinguish between tour pros and club pros, major champions and major rookies. All were bundled in dark rain gear.

The PGA Championship has moved to May for the first time since 1949, and for the moment, everyone is feeling it.

Temperatures were still below 10 degrees when players headed out for the first official day of practice on the Long Island public course, already soaked from weekend rain with more falling in the afternoon.

Just as Lucas Glover remembers it.

Glover won the previous major at Bethpage Black, the 2009 U.S. Open, during a week so inundated with rain that it didn’t finish until Monday afternoon and the maintenance crew kept finding shoes in the muck weeks after it was over.

It should get better by the time the championship begins on Thursday, with temperatures pushing 21 degrees by the weekend. But a wet course is a long course, and there were plenty of examples of that during morning practice.

Woods played the front nine and had 256 yards into the 524-yard seventh hole, which plays as a par four this week. He hammered a 5-wood that came up short. He tried a 3-wood from the same spot and that also failed to reach the green, and at that point Woods jokingly suggested he might consider teeing it up for a driver.

Kuchar hit driver down the middle of the 15th fairway, contemplated his approach to an elevated green guarded by bunkers, and was surprised to see it come up short. It didn’t get much better from there. He hit a 3-hybrid into the par-four 16th, and another 3-hybrid into the par-three 17th.

“The ball isn’t bouncing, obviously,” Glover said. “Long and hard, that’s what I remember. It’s kind of fun when it is that soft because the ball just kind of goes where you hit it. You get extra rewarded for a good shot, and a bad shot is still bad. So it’s still fair. … With it soft like this – probably going to be soft the first few days – there will be a lot of long clubs in, so it will be to your advantage if you’re striking your irons well, especially your long irons.”

Woods won the 2002 U.S. Open at Bethpage, which featured a steady rain in the second round and an hour delay for rain in the final round, and the PGA Tour staged its opening FedEx Cup playoff event on the Black Course twice. Nick Watney won in 2012, and Patrick Reed won in 2016.

Woods and Glover are among 14 players who will compete in all three majors, and the only major champions at Bethpage Black so far.

“That might be the only thing that anybody will ever use his and my name in the same breath,” Glover said with a laugh. “But any time you’re lumped in with him, it’s a pretty good honour. Pretty cool for sure.”

Both have gone through some down times, Woods mainly from injury, Glover from the frustrating nature of golf.

It got so bad for Glover that in 2012 – the only time he missed a tournament at Bethpage – he finished at No. 216 on the money list and made it to the final round in only four of the 16 events he played. His most recent victory was at Quail Hollow in 2011.

“I don’t know of anybody that’s played this game for a long time that hasn’t gone through some ups and downs,” Glover said. “I’ve come out the other side. I haven’t won. I haven’t accomplished any of my goals. But I’ve come through it, and there’s not much you can do that you can’t get through.”

Driving into Bethpage State Park felt comfortable for Glover, even under a grey sky that made it seem even colder and wetter than it was. It feels less like the PGA Championship than stops at Riviera and Pebble Beach in the cold, coastal air of California.

But this is where he became a major champion in 2009, and that hasn’t left him.

“I’m in every way a different person than 10 years ago, but I can still lean on all of that,” he said. “I still get comfortable when I walk into the clubhouse or drive through the gate. It’s just that calming feeling. It’s almost like how I imagine some guys feel driving down Magnolia Lane at Augusta that have had success there. It’s just like an automatic deep breath, like I’ve done it here. Let’s see what we can do again.”

For at least a few days, Glover and everyone else will be doing it with a rain suit. 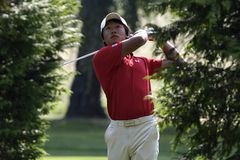 Matt Every takes lead before third round halted at Byron Nelson
May 11, 2019 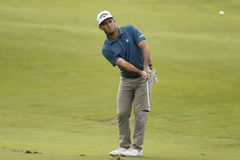 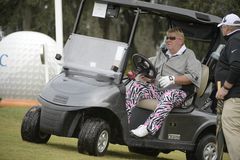