Francesco Molinari blamed a bad swing execution along with a poor decision for the two double bogeys that cost him a chance of winning the Masters on Sunday.

The reigning British Open champion had seemed impervious to the pressure of leading the final round of a major championship, even with Tiger Woods breathing down his neck.

The Italian putted brilliantly to keep his rivals at bay for 11 holes at Augusta National, and had a two-stroke lead over Woods when he walked to the 12th tee, one arm in the Green Jacket.

However, for the second time in four years, the watery grave known as Rae’s Creek drowned the hopes of the leader.

In 2016 it was Jordan Spieth, who made a quadruple bogey.

On Sunday, Molinari gauged a swirling breeze, pulled out an eight-iron and took aim at the pin, which was cut on the right side of the angling green, a longer carry over the water and an unnecessary risk under the circumstances.

His ball barely cleared the creek, landing on the bank and rolling back in.

“I was trying to hit a chippy eight-iron. It was probably a nine-iron yardage but I didn’t want the wind to gust and to get the ball too much and I just didn’t hit it hard enough.

“That ball, if it’s one yard further left it probably goes in the bunker.”

Even with the subsequent double bogey, Molinari was still in the hunt until a poorly played 15th hole, compounded by a bit of bad luck, finally sunk him.

A wayward drive forced him to lay up at the par-five, and he got a bit greedy with his wedge third shot from 82 metres, aiming for the pin instead of taking his medicine and steering well clear of tree trouble to the heart of the green.

His ball clipped a pine tree and came down in the pond guarding the green.

The stoic Molinari hardly betrayed a thought, but inside he must have been numb.

“It was obviously close to the branches of the tree and we never know, probably if it doesn’t clip the branch it might go close to the hole,” he said.

“But I probably should have gone middle of the green and just wait for the last three holes to try and make something happen there.”

Earlier, he started the day with a two-shot lead and sank a four-foot, par-saving putt at the first hole that for a while at least set the tone.

He had gone 49 consecutive holes without dropping a shot, one shy of the all-time Masters record, until a poor drive at the par-four seventh cost him a bogey.

The poor finish notwithstanding, the 36-year-old has established himself as one of the best in the world over the past year, and will always have a Claret Jug to his name.

But how he will rue what might have been, perhaps unlikely ever to get a better chance.

“Sometimes it is your day, sometimes it isn’t, but I’m really happy of the way I felt out there today,” he said.

“I was calm, collected, never panicked, even after the first double bogey.

“I’ve done a couple of things that I wish I had done differently now, but I’ll learn from my mistakes. 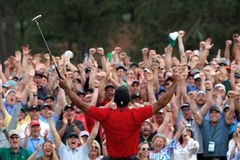 Opinion
He’s back: The remarkable fall and rise of Tiger Woods, Masters champion once again
April 14, 2019 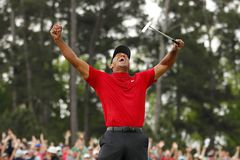 Tiger Woods wins the Masters for fifth time, his first major victory in more than a decade
April 14, 2019 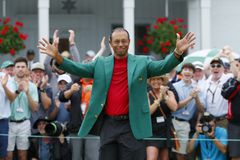