Rory McIlroy is on a tear lately. He won the Players Championship a couple of weeks ago. In six tournaments this year, he hasn’t finished lower than sixth.

But it’s April, and therefore time to start tunnelling into the Northern Irishman’s psyche looking for the place where the Masters haunts him.

“I’d love to win [in Augusta],” McIlroy told the Guardian this week. “I am going out there to try my best. ‘Indifferent’ maybe sounds wrong, but I’m not at the point where it’s a burden to me. Not at all.”

“Ma’am, you were one number away from the lotto jackpot, how would you describe your feelings?”

This is what the Masters does to otherwise wildly successful athletes. It turns them into needy schlubs. They’re wandering around looking for absolution, for someone to say, “No, really, both Opens? That’s amazing. Doesn’t get any better than that. You should probably just retire.”

McIlroy will enter this year’s tournament, beginning on Thursday, as odds-on – but not sentimental – favourite. His mien deflects empathy. Not quite as cocky these days, but still too chippy. Like a lot of very driven people, McIlroy makes it difficult for you to like him.

The athletes we love best are the ones who make it look easy, possibly because it lets the rest of us feel that it wasn’t hard work we lacked, but outrageous good fortune.

Also, Tiger Woods will be there. As long as Woods can stagger out to the first tee box – on two legs, on one of those Hannibal Lecter person-gurneys, or carried there by ushers – he will be Augusta’s darling.

The Masters would complete McIlroy’s major cycle. Though only 29, he’s been trying to tick this final box for years.

As with all of Augusta’s classic victims, he is defined by both his consistency and his failures. McIlroy is a perpetual presence on the Augusta leaderboard. But his defining moment remains the final-round collapse of 2011.

Perhaps you recall it. The British tabs called it McIlroy’s “three holes from hell.”

One of the things that makes golf compelling is its variation on the choke.

In other sports, the choke is instantaneous – one terrible, split-second decision; a muffed penalty; an unavailable timeout called.

In golf, the choke can take 20 minutes. It’s like watching someone go ass-over-teakettle down an endless flight of stairs. It’s excruciating. Having looked on, no one ever forgets seeing it.

Imagine living it. And then knowing there is only one way to erase the public’s visual data bank – by overwriting that memory with a win.

Since that career-defining slip on the back nine, McIlroy has adopted the “No Masters? No problem” koan as his personal mantra. It gets less convincing each year. Take the case of Sergio Garcia.

The title of “Golfer Most Likely To” is passed down through the PGA like a voodoo hex. The Masters iteration is worst of all. One assumes Greg Norman convulses whenever he catches the scent of azaleas.

Garcia was cursed by it for an athletic lifetime. For the first few years, he sounded a lot like McIlroy does now. Eventually, he snapped.

After a terrible round at Augusta in 2012, Garcia said, “I’m not good enough. … In 13 years, I’ve come to the conclusion that I need to play for second or third place.”

“In any major,” Garcia sniped back.

Years ticked by. The millions piled up. But no Masters and, therefore, no satisfaction.

Garcia finally won Augusta a couple of years ago. In the postmatch presser, you half expected him to lie down and die from relief.

The impression he gave off wasn’t joy or elation. He had the look of a man who had finally laid down that burden McIlroy referenced. All of us have had that same experience, and know that it is a far more satisfying experience than mere success.

Since then, Garcia hasn’t won any sort of tournament. He hasn’t really been close. And who cares? He won the Masters. His work is done.

After that 2017 victory, Garcia talked about how he’d won by giving up on winning. Not ceasing to care, but reconciling himself to the fact that it was never going to happen.

“I kinda came to peace with it,” Garcia said. “I think that because of that, I am able to stand here today.”

He was sitting as he said it, but he was six inches taller.

You don’t often think of Buddha as an incipient sports psychologist, but the idea struck you as a profound truth. That desire is the root of all suffering and that there is no milieu on the planet more encouraging of naked desire than pro sports.

At a certain point – after the money becomes a haze of zeroes on a bank statement and you’ve climbed to the top of the sponsorship pole – great golfers have only one thing left to desire. And so, the suffering.

You don’t watch the Masters to see one guy win. You’re also there for a half-dozen others who must lose.

That’s the subtext at every Masters, and perhaps the most enthralling. It’s the reason they start out each year with the ceremonial tee-off by former champions.

Gary Player and Jack Nicklaus aren’t required to lend the occasion gravitas. It’s already got plenty of that. They’re there to remind the competitors what’s at stake.

Doesn’t matter what else you’ve won, or how much you’ve earned. You haven’t really made it until you’ve made it in Georgia in April.

Nicklaus won the Masters twice in his 30s. Arnold Palmer did it three times. But, crucially, they’d both already won in their 20s.

McIlroy is right in the middle of his prime. He’s fit as a fiddle (and never stops talking about it). He’s clearly got the game. This should be a matter of time.

But that isn’t how this works. The Masters is bigger than inevitability. Each failure there adds a weight to the emotional bag you carry around the course.

That’s how big-time golfers end up giving these “Honest, I don’t even care that much” interviews (a thing you would never hear someone say about the most meaningful championship in any other sport).

You aren’t talking to other people. You’re talking to yourself. And you’re not doing a very good job of it.

Garcia figured the way out. McIlroy doesn’t need to care less. He needs to care not at all.

Which is – like everything else about good golf – easy to say and extremely difficult to do. 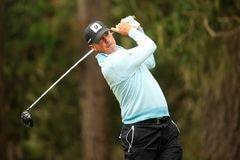 Opinion
Tiger vs. Phil is a reminder of when athletes used to play
November 23, 2018 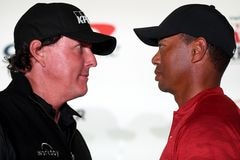 Opinion
Tiger Woods has pulled off an improbable comeback – and the hype is just beginning
September 24, 2018 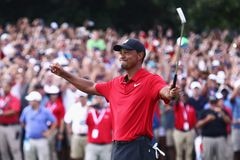