Golf Canada is cautioning Oakville that its move to designate the Glen Abbey Golf Club as a heritage site could throw any future hosting of the Canadian Open into doubt.

In a letter to the Town's heritage committee, Bill Paul, the chief championship officer of Golf Canada, which runs the Canadian Open, said the potential designation of the entire golf course as a cultural heritage site has implications for the club's ability to play host to the PGA tournament. The chief concern is the ability for Golf Canada to implement changes to the course in time for next year's championship and whether the approval process entailed with being a heritage property would hinder those changes.

"The fact that there is now uncertainty regarding the possible implementation of these changes and that time is short means that we must review our plans for 2018, and beyond, and prepare contingency plans," Paul wrote.

Glen Abbey is scheduled to hold next year's Canadian Open, the fourth year in a row the event will be there and the 30th over all. But Golf Canada is cautiously awaiting the results of a vote next Monday of the full Town of Oakville council. The heritage committee unanimously voted on Tuesday to recommend designating the entire golf course, including the tees, fairways, greens and other design features, as a heritage property.

The push to make the property a heritage site comes amid a redevelopment proposal from the owner of Glen Abbey, ClubLink Corp. The company first proposed turning the golf course into housing units in late 2015, after Golf Canada said it started searching for a permanent home for the Canadian Open elsewhere. The development application is separate from the heritage designation, the process for which was started in 2013 before any redevelopment plans became public, according to the chair of the committee, Drew Bucknall.

The course is situated on 92.7 hectares of prime real estate in the growing GTA. ClubLink wants to build 3,222 housing units on the property, including nine apartment buildings and an additional 122,000 square feet of retail and commercial space. ClubLink would leave approximately 50 hectares of the property as green space, donating it to the city for public use. The heritage designation, while not preventing redevelopment of the site, could hinder ClubLink's plans.

He said in the committee's consideration of Glen Abbey as a heritage property that playing host to the Canadian Open was not relevant and the running of the golf club would not be affected. He said a similar designation for a local business district did not prevent any of the store owners from making changes to their storefronts, signage or other things necessary to keep their businesses viable.

Robert Visentin, ClubLink's senior vice-president of investments, said in an interview that there was a lack of clarity with the heritage designation, that the company was left out of consultations and important information on the process was delivered to the golf course operator with too little time for ClubLink to prepare. "It's our belief that those restrictions that they're imposing based on our reading of the information so far, that they're going to burden the property and may accelerate the end of championship golf on the site." He added the company was unsure whether it could even "cut the grass" once the designation was in place.

The course was designed by American golf legend Jack Nicklaus in 1976 and is his first solo design. It is also the country's only stadium golf course, and no place has held the Canadian Open more often. The heritage reviews commissioned by Oakville say the course's "spoke-and-wheel" design is possibly a first for modern golfing and the spatial arrangement between holes must be protected.

"Its design is remarkable for the integration of artistry and craftsmanship, with many iconic stretches including the challenge and beauty of the valley holes and the drama of the final two holes," Julian Smith, an internationally renowned heritage architect, said in a report for the heritage committee. "Its association with the Canadian Open has given it international significance and ties to many of the leading figures in the sport. It is a landmark not only within the Town of Oakville, but across Canada and abroad."

While the redevelopment of the Glen Abbey site is still possible, Golf Canada has a shortlist of three other sites, all in the GTA, for a permanent home for the Open. Golf Canada says it needs more space for everything that comes with holding a PGA Tour event, which is not possible at Glen Abbey because there is no further room to expand.

Vaughan is confirmed to be a potential site as the city council there voted in April to partially fund a study to determine if a 365-hectare parcel of land would be suitable for a new golf course. The other two sites are unknown but a final decision is expected later this year. 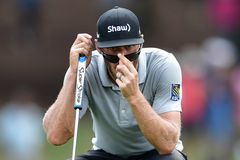 Jhonattan Vegas wins second consecutive Canadian Open title
July 30, 2017
At the Canadian Open, the ‘Curse of Pat Fletcher’ lives on
July 30, 2017
Follow us on Twitter @globeandmail Opens in a new window
Report an error Editorial code of conduct
Due to technical reasons, we have temporarily removed commenting from our articles. We hope to have this fixed soon. Thank you for your patience. If you are looking to give feedback on our new site, please send it along to feedback@globeandmail.com. If you want to write a letter to the editor, please forward to letters@globeandmail.com.
Comments