To remember Dan Halldorson as a taciturn golf pro from a bygone era would be as egregious as defining him by his politically incorrect quip that being the top Canadian in the Canadian Open "is like being the tallest midget."

Neither by any means encapsulates his life, which was cut short by a stroke on Nov. 18 at the age of 63 in his home in Cambridge, Ill.

Mr. Halldorson won twice on the PGA Tour, had seven Canadian Tour victories, was the only Canadian to win two World Cup team titles (1980 with Jim Nelford and 1985 with Dave Barr), and was named Canada's top male touring professional in 1981 and 1983.

"He'll be remembered as a champion," Bill Paul, Golf Canada's chief championship officer, told The Canadian Press. "And a champion is not always [defined by] the trophies on the mantle at home. It's that, but it's more so what you did in the game and … what you did to make it better. I saw Dan as someone who did that as a player, did that as an administrator and, probably more importantly, what he did as a mentor."

Daniel Albert Halldorson was born on April 2, 1952, in Brandon and was raised in Sandy Hook, Man., across the road from the Sandy Hook Golf Club where his father was the greenskeeper. The course's owner, Pat Doyle, was Mr. Halldorson's first golf instructor. At 19, after winning the 1970 Manitoba Junior Championship, he turned pro, choosing not to attend college.

Joey Sindelar played many times with Mr. Halldorson during their days on the PGA Tour. From his home in New York state, Mr. Sindelar said, "Danny made it look so easy. If it was one of those times at a tournament when your swing had deserted you and Danny was on the range, you would stand behind him and get it figured out. He had a beautiful golf swing, so fully in control."

But an outstanding tee-to-green game gets you only so far in golf. As has been truly said, putting is a game within the game. For the most part, that "control" did not extend to his putter, which was his Achilles heel.

And so it is that his PGA Tour record shows but a single official victory, the 1980 Pensacola Open, although it lists 28 top-10 finishes. He lost a four-way playoff at the 1981 Quad Cities Open to countryman Mr. Barr. Mr. Halldorson's win at the 1986 Deposit Guaranty Classic (at the time conducted the same week in April as the Masters, one of golf's four majors) went into the books as an "unofficial" win. The fact that he did not have the required two official victories to qualify for a regular spot on the Champions Tour for players over the age of 50 was a source of frustration.

Although he moved to his wife's hometown in Illinois when they married in 1983, after meeting at a PGA Tour event, Mr. Halldorson remained Canadian at heart.

It was his years spent on the nomadic and hardscrabble Canadian Tour (now the Mackenzie Tour-PGA Tour Canada) between PGA Tour stints that created and cemented his lifelong relationships. He played full-time in Canada when he didn't have his PGA Tour card and, even when he did, he returned north occasionally to support the Canadian Tour. He won seven titles in Canada between 1971 and 1986, including the 1986 Canadian PGA Championship.

"We weren't brothers in name, but we were in every other sense of the word," Scott Knapp, the dean of Saskatchewan golf professionals, said. The two men met at the 1975 Ontario Open, toured together for several seasons and were the closest of friends for 40 years.

"He was just back in Canada after trying to make the PGA Tour," Mr. Knapp recalled of the time when they first met. "He knew he had to change his game to compete on the big tour and, even though it took him two years to do it, he did."

With a hard, running draw, Mr. Halldorson was quickly acknowledged as one of the longest hitters in golf at the time – "the John Daly of his day," according to long-time Canadian sportswriter Kent Gilchrist. But after a couple of attempts to compete on the PGA Tour, he realized he needed to reverse that right-to-left shot pattern in order to score more consistently.

He returned home to work through that swing change on the Canadian Tour and then, in the mid-1970s, qualified for the PGA Tour where, off and on, he spent three decades.

If the Canadian Tour did him some favours as he honed his revamped swing, he would return those with interest when he was deputy commissioner of the Canadian Tour. Not only did he help to expand and enhance the tour, but he also mentored young players, some of whom now are PGA Tour stalwarts.

"The smartest thing I ever did was hire Dan," Rick Janes, who was the tour's commissioner, said. "He brought to that job the same incredible passion, determination, work ethic and attention to detail as he did to the only other job he really ever had – and that was playing golf at the highest level."

At the time of his death, Mr. Halldorson was the director of golf at Oak Island Resort in Virden, Man. He leaves his wife Pat, children Mark and Angie, eight grandchildren, and brother Ron.

Mr. Barr once said that, at his peak, Mr. Halldorson could "dissect a golf course" with his clubs. His dry and incisive sense of humour could do the same to unsuspecting victims. Mr. Knapp spoke for everyone who knew him well, calling Mr. Halldorson one of the funniest people he ever met. Mr. Sindelar concurred: "He was a wonderful guy. He always had that look on his face like he had something funny to say."

When he was inside the ropes competing in a tournament, he was in his element as few others have been. When he was outside those physical ropes, he strung up a psychological version of them, keeping strangers at bay. When it came to the value of friends, as the old saying goes, he preferred a few $100 bills over a pocketful of twenties.

Even when he made it to the big time, he stuck to his small-town values. Those who really knew him describe him as loyal, humble, a true and honest friend.

Take, for example, Carolanne Doig and her brothers, Cam and Todd. They own Seaforth Golf Club in the town of the same name in Southwestern Ontario. They had a special relationship with Mr. Halldorson for decades. Not only did he help Ms. Doig to launch a line of golf rain gear, but he also headlined the club's pro-am every summer, pro bono.

During a short-lived foray into course architecture, he worked with Cam to revamp the course's routing. When he was deputy commissioner of the Canadian Tour, he brought a tour event to their homespun course. The Doigs were his kind of people.

Until, that is, you saw him hit a golf ball. 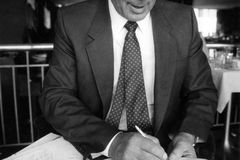