That appeared to be du Toit's mantra at Sunday's RBC Canadian Open, where he started the final round tied for second with Dustin Johnson and behind Brandt Snedeker.

His remarkable ascent over the weekend from a virtually unknown amateur to a legitimate contender for the country's top professional golf title had Canadians, deprived of a homegrown winner since 1954, wondering: Could this be the one?

Not yet, it turns out.

The 21-year-old du Toit (whose surname American broadcasters first had trouble pronouncing) plummeted seven spots and finished tied for ninth at nine under after a final round of 71. He struggled at the start of Sunday's round with two early bogeys, but birdied 16 and 18 to finish two shots ahead of world No. 1 Jason Day, earning the Gary Cowan Award for low amateur.

"I think it's safe to say this has been the best week of my life so far," du Toit told a cheering crowd after the tournament. "I got to meet some guys that I really looked up to growing up. I'm very honoured to be here."

Making his breakout performance even more impressive, du Toit learned on Saturday night that he had bronchitis after what he initially thought was a cold grew worse over the past seven days. Coach Derek Ingram drove du Toit to nearby Oakville Trafalgar Memorial Hospital and the young player only got five hours sleep ahead of Sunday's final round.

"We're going to take care of this bronchitis a little bit, probably hold off the celebration a little more," du Toit said.

Vegas pocketed $1,062,000 (U.S.), which du Toit would have had to turn down as an amateur, and will advance to the PGA Championship next week at Baltusrol in New Jersey.

Vegas also received a two-year tour exemption and a spot in the Masters next year.

The Glen Abbey galleries in Oakville, Ont., erupted in cheers Saturday when du Toit sank a 40-foot eagle putt at the 18th hole, the highlight of a weekend performance that stunned players and fans.

"For a 21-year-old kid to be playing golf here is awesome, let alone to do it in your national open," Snedeker said. "I mean, I can't imagine the nerves this kid has to be playing as great of golf as he has."

As du Toit, who wore Golf Canada national apparel, walked back to the official scorer's trailer after his putt, sections of the crowd belted out O Canada. Spectators in the galleries, who didn't know his name, called du Toit "the young Canadian," reports said.

"Unbelievable," du Toit said at the time. "The atmosphere out here has been unbelievable. Walking to each green, each tee box, everybody hooting and hollering 'Go Canada!'"

He spent two seasons with the University of Idaho, where he earned freshman of the year honours for the Western Athletic Conference, before transferring to Arizona State University. He has eight top-10 collegiate finishes.

Du Toit said he plans to finish his senior year at Arizona State, play more amateur tournaments and "just have some fun. Be a 21-year-old."

Pat Fletcher was the last Canadian to win the open at Vancouver's Point Grey Golf Club. An amateur hasn't won since 1956, when Doug Saunders, an American, won at Montreal's Beaconsfield Golf Club. 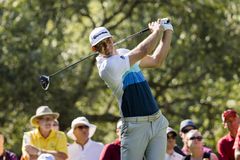