The occasion was the imminence of Woods' signature tournament, The Masters, which begins on Thursday.

"I've been hitting balls and training daily, but I'm not physically ready," Woods said in a statement posted to his website. "[I] need to be cautious and do what's best for my long-term health and career. Unfortunately, playing Augusta next week wouldn't be the right decision."

I'm sure it's the best thing for Woods. It's hard to say how any of this is good for golf.

A few years ago, it was generally agreed that the sport needed Woods in whatever shape he could manage. He could be out there sprawled on a tree stump swiping at the ball with a croquet mallet, and that was good for golf.

That's no longer the case. Golf doesn't need Woods to get better (because he isn't) or rush his recoveries (because he can't). What golf needs is for Tiger Woods to give up.

At this point, it can't overcome the eerie sense of stopped time created by his spectral presence. A multibillion-dollar industry is depending on its finest recent practitioner to accept that his body has betrayed him and graduate to the celebrity-circuit, course-design stage of his career. Instead, Woods just … won't … go … away.

The 40-year-old's wonky back and trick knees have turned him into something out of Monty Python and the Holy Grail. You chop off a leg and think all the fight has deserted him. Then he pops up a couple of months later and says, "Just a flesh wound! I'm not setting any sort of timetable, but I'm pretty sure I'll be ready to go by the PGA Championship!"

Six months later, after another surgery, he's dragging his hospital gurney onto the fairway, shouting, "I've heard about this crazy place – Lourdes! I'll totally, totally, totally be back for the U.S. Open in 2018. Mark it down!"

Were it anyone else, people could move on. If you removed his cultural significance, his late-1990s/early-2000s aura of invincibility, his charismatic hauteur and his marketing savvy – that is to say, if you turned him into Phil Mickelson – this all wouldn't matter very much.

Woods-as-Mickelson could come or go as he pleased. Maybe he'd even win a couple and people would say, "Good for Woods(-as-Mickelson). I always liked that guy."

He could fade gradually from the stage, in the same way Mickelson is now sliding gently into irrelevance. You might not even notice it happening. One day soon, you'll wake up and Mickelson will be 50 and you'll say to yourself, "God, where did the time go?"

But regardless of what he's doing, Woods-as-Woods is too big for that. Post-Muhammad Ali, he may be the peerless athletic personality in modern memory. The Shakespearean fall in the third act only heightens that effect. Even second-rate, Woods has more gravity than the sport itself.

If you count major tournament victories as the things that matter (and, at Woods' level, they are), he hasn't managed to do anything of significance for eight years. In most sports, that's an entire generation: Stars should have twinkled into existence, shone their brightest and begun to dim in that time.

Yet on Monday, CBSSports.com – the Web arm of The Masters' long-time broadcaster – felt the need to publish a story titled "Masters 2016: Which golfers to root for at Augusta National." The implication being that casual fans either do not know or do not care about Woods' paltry heirs.

You're proof of this. You've gotten this far in the article. You're probably not even enjoying yourself. You may be deeply regretting having gotten mixed up with this dreary word salad. And yet, here you are.

If it had been about any of golf's current stars – Jason Day, Jordan Spieth, Rory McIlroy, Harvey Shank – you wouldn't have gotten past the headline.

Did you catch that? Though I wish it were so for poetic reasons, Harvey Shank is not a golfer. He's a guy who pitched (poorly) for the California Angels in the 1970s. But you were so concentrated on Tiger Woods, you slid right by that.

Golf has two ways to solve this.

The first has proved too difficult. That would be to find a new mainstream fixation. Nobody's come anywhere close. They aren't good enough, though who could be? Woods set the bar for "good" at golf ridiculously high.

More importantly, they don't have that ineffable ability to make you care. The closest golf has to a Woods-level personality (though he is nothing like him) is Spain's chain-smoking, deep-knee-bending, fairway-dancing peacock, Miguel Angel Jimenez. And Jimenez is hurting the cause. He isn't good enough to draw eyeballs by himself, while his surfeit of middle-aged sex appeal makes all the younger guys look like crushing bores by comparison.

The second way of cutting the Woodsian knot is by forcing the man out. Which is impossible. As it stands, every tournament in the world would happily highlight Woods in a wheelchair until he either retires or dies.

In his statement letting The Masters down this week, Woods included an apology to tournament's "membership, staff, volunteers and patrons." The Masters is the only brand in golf anywhere close to as big as Woods. It doesn't need to feel disappointed by his absence. And you know they still do.

Whether under his own terms or nature's, Woods cannot fade. It won't work that way. His manner of leaving must be a violent removal. Until he actually quits – says those words: "I'm quitting" – the planets cannot realign.

Is he willing to do that? Almost certainly not. That stubbornness made him great. Now it's making golf much less so.

Tiger Woods, unsure of the future, reflects on the past
December 8, 2015 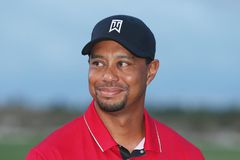 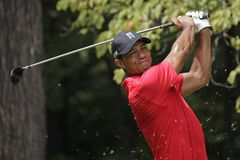 Kelly: The divisive Tiger Woods has all but ended his pro golf career
December 3, 2015 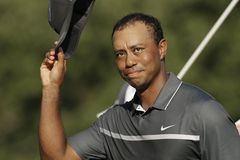