On a bright sunny Tuesday morning in his adopted hometown of Calgary, Stephen Ames received the ultimate prize in Canadian golf – induction into the Canadian Golf Hall Of Fame. The ceremony was held at a local club, Canyon Meadows, which this week is hosting the second annual Shaw Charity Classic, a Champions Tour event beginning Friday.

Though he is still a member of the regular PGA Tour, Ames will compete in only his second event as a senior, after turning 50 earlier this year. It is a chance to be the young guy again, playing a 54-hole event featuring some of the most enduring personalities in the game – and best of all he gets to act as unofficial tournament host.

"That was the goal – to sleep into my own bed and to drive to work, instead of having to jump on a plane and fly 15 hours to get there," said Ames. "Being the home boy back in Canada again, it's going to be busy – but you take it in stride."

"The good thing about this tour is, you've got [only] 81 players and I think we tee off at 11:30 every day," he added. "That's kind of nice. You get to sleep in, rather than have the four o'clock wake-up to get ready for your 7 o'clock tee time.

"On top of that, I have my youngest caddying for me as well, so that's going to make it even better – that he's going to enjoy that with me."

Ames is originally from Trinidad and Tobago, but has made Calgary his home since the 1990s. He has won four times on the PGA Tour, most memorably at the 2006 Players Championship, plus twice on the European tour, and he also has six top-10 finishes in major championships. He has nearly $20-million in career PGA Tour earnings.

Beyond his on-course achievements, Ames was also lauded for his charity work, most notably through the Stephen Ames Foundation. Among other ventures, the foundation sponsors an annual Ryder Cup-style junior competition between his native and adopted countries.

Most of the top players on the Champions Tour are here, including the ever-popular Fred Couples and German star Bernhard Langer, who has won five times already this season.

"This tour, a lot of people think it's not as competitive, but I'll tell you, it is," said Ames. "Those guys are still very hungry. Everybody still has pretty much the same game they've had. I've played with Bernhard [Langer] for 20 years, and his game hasn't changed much, except for the fact that the younger guys, the Rory McIlroys, are flying the ball 300 yards. We never did that back then – 300 was an extremely long drive. Now, they're flying it 300, so it's a different game.

"But [the senior stars'] accuracy off the tee and their methodical ways of playing the game are still there. I'm looking forward to it."

The Shaw Charity Classic made its debut a year ago to rave reviews, and Ames hopes that, one day, the city's legendary hospitality, combined with its financial clout, will permit Calgary to host the RBC Canadian Open.

"The only thing holding us back at this stage is a golf course. Considering how far the younger guys hit it, we need something extremely long to be able to host the Canadian Open here. We are also at 3,500 feet. The ball goes a little further than normal."

Hall of Fame honours represent a sort of lifetime achievement award, and while he is fully appreciative of his inclusion as the 74th member, Ames also believes there's still a lot of mileage left on the odometer.

"This is the back nine of my career now, going into the Champions tour, but I am still playing," said Ames. "Here I am, doing a job I can enjoy every day and not having to deal with the turmoil of society and the rest of the world, so I have to say, I'm very fortunate."

Among his claims to fame, Ames helped bring Canadian swing coach Sean Foley to the attention of the golf world soon after the most memorable of his PGA Tour victories, the 2006 Players.

The two had a mutually beneficial relationship – Ames provided Foley his first contact with some of the star pupils he'd eventually work with, Tiger Woods among them; and Foley helped Ames get (and then mostly stay) healthy. Ames's back problems were so acute that in 2006 he had to withdraw from the RBC Canadian Open.

The sport, at every level, can take a physical toll on players, and Foley – who parted company with Woods this week – taught Ames to swing in a way that put less stress on his body.

"Sean showed me where I was going wrong with how my body was working, and showed me how I was supposed to swing, the way it doesn't hurt my back anymore," Ames said. "He actually showed me why I was putting so much strain on my back. In that respect, he's given me another 20 years." 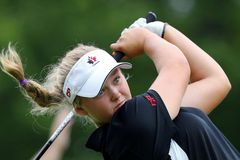 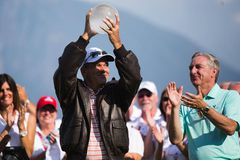