This is what "ugly" means in hockey.

Its face today, unfortunately, belongs to Roberto Luongo, a brilliant goaltender who just may have too many synapses going off in his head at critical moments.

Luongo's Vancouver Canucks went into Game 6 at Boston's TD Garden with the opportunity to bring the Stanley Cup back to Canada for the first time in 18 long years of championship drought.

It was an opportunity lost in all of 8 minutes 35 seconds, squandered in eight shots on Luongo's goal, of which three went in, two of them kindly described as "weak."

In that small blink of ice time, the Boston Bruins had effectively evened their best-of-seven final series at three games apiece - the final score 5-2 in Boston's favour - with a decisive Game 7 now to be played in Vancouver Wednesday night.

Luongo said he "felt fine all day," but the first difficult shot he faced, a wrist shot by Boston forward Brad Marchand from the right circle, beat him easily.

"It was a good shot," Luongo said after the game. "But at the same time, I've got to make that save."

Another shot, far weaker, went between his legs, followed by a long shot from the point that he appeared not to see to make it 3-0 Boston.

"To hang your head now and feel sorry for yourself would be the worst thing I could do," Luongo said.

"I'm not going to make any excuses. I'm just going to move on. We have one game at home now to win a Stanley Cup."

It is not known whether Vancouver will start Luongo, the team's $10-million-a-year superstar and franchise player, or young Cory Schneider, a $900,000-a-year backup who has yet to win his first Stanley Cup playoff game.

It was Schneider who came in to Monday's game in relief of Luongo. The 25-year-old Boston-area native had also replaced Luongo in Game 4 here after the Bruins had run up the score to 4-0. In that game, he did not allow another Bruins goal in the short time he played.

The 32-year-old Luongo, on the other hand, has a positively horrific record in Boston, having now allowed 15 goals in less than three full games - a remarkable contrast to the three Stanley Cup final wins he has in Vancouver, including two by shutout.

It is most perplexing: brilliant at home, stumbling on the road. And the conundrum could well become the fabulously talented Luongo's National Hockey League legacy.

More than a half-century ago, Detroit Red Wings general manager Jack Adams claimed that, "What pitching is in a short series in baseball, goaltending is in the Stanley Cup playoffs."

It is an incremental collapse. The goaltender falters. The defencemen, who are tasked with keeping attackers at bay, lose faith and stay further back in order to defend. The forwards begin worrying more about their own end than the opposition end. The attack fizzles; the mistakes compound; the game is lost. That is how important the goaltender is. Whether Schneider's play and Vancouver's slight recovery in the third period can regain the confidence the Canucks - the NHL's top team during the regular season - brought into the postseason remains to be seen.

Since the Conn Smythe Trophy was first awarded to the most valuable player in the playoffs back in 1965, goaltenders have won it a remarkable 14 times. Five times, the trophy has gone to a member of the losing side, four of those recipients being goaltenders.

If Boston were to lose in Vancouver, the odds-on favourite to win this year's Conn Smythe is Boston's Tim Thomas. If Boston wins, he's a lock.

The contrast between the two, Luongo and Thomas, has been stark this spring, Thomas endlessly easygoing and laughing, Luongo intense and, at times, brooding. Thomas usually laughs off most questions. Luongo, a serious and thoughtful man, tries to answer. When the Montreal native happened to say, quite accurately, that because of their differing styles of play -Thomas challenging shooters, Luongo protecting his net - the off-the-backboards goal that won Game 5 would have been "an easy save for me," it blew up on him in Boston as some sort of insult aimed at Thomas. The quote was even shown on the television screens when Luongo was replaced in net by Vancouver head coach Alain Vigneault.

Luongo's play in Boston had them snidely calling out "Loooo-wonnnngooo," and shuddering in Vancouver, where fans were once certain Vancouver's two-games-to-none lead in the series would result in a Stanley Cup.

It is easily hockey's most stressful position. "How would you like it," hockey Hall of Famer Jacques Plante once asked, "if you were sitting in your office and you made one little mistake - suddenly a red light went on and 18,000 people jumped up and started screaming at you, calling you a bum, and an imbecile, and throwing garbage at you?"

This, however, was not just "one little mistake." Two of the three goals scored on Luongo were shots he would normally easily save. Something gets into his head under intense conditions and that has tracked him throughout a career that is otherwise sparkling. He did not play well in the 1998 Memorial Cup. He allowed a late goal in the gold-medal game at the 2010 Winter Games, leaving victory to Sidney Crosby in overtime, with all credit going to the goal scorer and precious little to the man in net.

The question that has continually been asked of Luongo is: "Can he win the Big One?" It is a question that drives Vancouver Canucks fans to distraction, even anger, but it may finally have to be answered on Wednesday night in Vancouver - providing Luongo, and not Schneider, gets the start in net.

Luongo's teammates are acutely aware of the big question, one they are as keen to see answered as Luongo himself.

"If you win the Stanley Cup," Canucks forward Daniel Sedin said before Monday's match, "no one can really say anything about you." 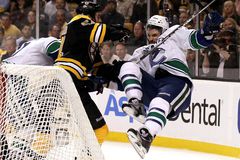 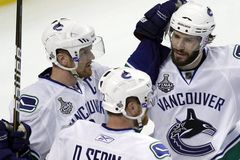 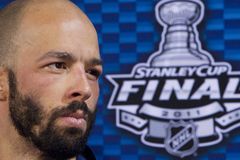 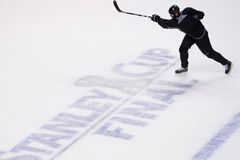 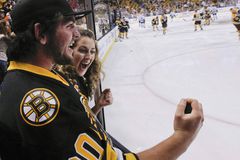