Even as the NHL lockout enters its first week, with no real damage done, there seems to be a general consensus that maybe this one won't be as bad as the last one.

Remember what the temperature was like in September of 2004? It reached a boiling point early. The two sides dug in, didn't speak for the longest time and eventually managed to stonewall away a full season.

The prevailing theory among the present-day optimists is that the last lockout was all about systemic change; and this one is simply about percentages – and how to divide the $3.3-billion (U.S.) industry pie.

Eventually, players and owners will see reason and find a split-the-difference compromise somewhere in the middle that will leave everybody happy.

Maybe it will go that smoothly.

Maybe this is just NHL commissioner Gary Bettman trying to get the measure of his adversary in these talks, National Hockey League Players' Association (NHLPA) executive director Donald Fehr.

That's the difficulty for anybody who purports to know how long the lockout is going to last. They don't know. They can't know.

And it's because for Bettman, Fehr is an unknown commodity.

Last time out, when Bettman was negotiating a new collective bargaining agreement with Bob Goodenow, at least he knew where he stood. They'd been at the table before. They knew each others' moves. It was like playing poker against a familiar foe.

Fehr, by contrast, is a new player at the table and thus unpredictable, save for his reputation as an ultra-hard liner is his baseball days. It is likely why the NHL started these negotiations with such a silly lowball offer last July. They didn't want to give away too much too fast.

It was largely the fear of Fehr.

So the NHLPA felt it had to come back with an equally unattractive package, ensuring that the gulf between the two sides was practically cavernous at the start of negotiations. In the nine weeks since, they've barely inched any closer to the middle, awaiting the first real pressure point in the talks, which won't come until Oct. 11, or the scheduled start of the 2012-13 regular season.

So you can clutch at straws and hope for the best by dismissing the events of the past 72 hours as the usual rhetoric and posturing – or you can go all Chicken Little and think the sky really is falling.

The evidence for pessimism seems far stronger, and that's largely because Fehr has the players convinced that their givebacks during the lost season of 2004-05 mean that the onus is on the owners to compromise this time.

Bettman, naturally, has taken the opposite point of view – that the past seven years were unexpectedly flush times for the players, a period when their share of the proceeds rose from 54.3 per cent at the starting point to 57 per cent when the agreement expired.

Bettman wants those percentages adjusted, on the grounds that costs beyond player salaries have risen and that similar concessions have been negotiated in two other big-time sports leagues, the NFL and the NBA.

Bettman last spoke publicly about the league's strategy last Thursday and in the midst of his address, warned the players that a couple of missed paycheques in a lockout would have the same effect as agreeing to the NHL's percentage rollbacks. Based on player reaction, they didn't see it the same way.

So they're stuck, with the NHLPA offering an industry model that enhances revenue sharing and would limit the effects of salary increases down the road, provided the league continues its growth spurt.

Certainly, if the league were more agreeable to moving some of its deadbeat franchises from south of the Mason Dixon line to places such as Quebec City and Markham, Ont., then maybe the previous rate of growth is sustainable – for a little while anyway.

That doesn't seem to be in the NHL playbook right now, however. Instead, it wants a deal that will prop up some of the deadbeats, and help the big money makers – the Toronto Maple Leafs, the Philadelphia Flyers – earn even more.

In short, the two sides are singing from completely different song books and the result is a cacophony in which both Fehr and Bettman have cupped their hands over their respective ears, scrunched up their faces and are squealing at the top of their lungs: "I'm not listening! I'm not listening!"

One year ago, there didn't appear to be any hope on the NBA's lockout horizon either – and the two sides eventually cut a deal after three blocks of regular-season games had been chopped and they'd arrived at 11:59 p.m. on the negotiating clock. Maybe that will happen in the NHL too.

From here, it looks as if nothing's going to change any time soon – and the stalemate could drag on so long that it costs both sides another full season. It would be wasteful, it would be unnecessary, but make no mistake about it. These are not rational people acting in a rational manner. It could easily happen again. Analysis: The most unnecessary lockout of them all
September 17, 2012 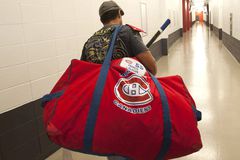