Doug MacLean, the Sportsnet television analyst, was making an interesting distinction the other night between the two precocious youngsters not named Connor McDavid who are currently taking Alberta's NHL teams by storm.

Even though the Edmonton Oilers' Leon Draisaitl has been lighting up the league since his minor-league recall, MacLean expressed a slight preference for the Calgary Flames' Sam Bennett, citing Bennett's tenacity, versatility and ability to play a 200-foot game as a teenager in the NHL.

The comparisons between Draisaitl and Bennett will likely go on indefinitely, given that they were the third and fourth overall players chosen in the 2014 NHL entry draft – and thus far, both are have edged ahead of Sam Reinhart, the second pick in that draft, in terms of their developmental arcs.

Draisaitl, who played 37 games in the NHL and is a full eight months older than Bennett, has averaged almost a point-and-a-half a game since replacing the injured McDavid in the lineup three weeks into the season. It was roughly then that Bennett also made a quantum surge forward in his game. After a tentative start to the season, he has already evolved into one of Calgary's go-to forwards, a rare bright spot in otherwise disappointing start to the season.

"It usually goes one of two ways," explained Flames' forward Joe Colborne of Bennett's evolution. "Either you see the best of the guy right away, and then it drops off; or you see guys, where it's not quite clicking at first and then it takes off. It's very similar to Johnny [Gaudreau] last year. Johnny came in and you could tell everything was there – the brains, the skill, the ability, but it wasn't quite clicking at first; and it's a confidence thing.

"So much of this game is confidence because in that split-second where you question yourself, you're going to make a mistake and that's when you're going to have a guy like [Chicago Blackhawks' defenceman] Duncan Keith stepping up on you.

"But if you take that doubt away, then all of a sudden, you have the room to make the play. Benny's been incredible. He's still young; he's still learning; but I'll tell you what: He's exciting to watch and he's going to be a heck of a player for a long time in this league."

Bennett played one regular-season game, plus 11 more in the playoffs for Calgary last season, after spending most of the year recovering from major shoulder surgery. That cameo proved to be one giant adrenaline rush, punctuated by an upset victory over the Vancouver Canucks in the opening playoff round. But now, the Flames are a quarter of the way into the 82-game NHL grind, and it's a different challenge, dealing with travel, and needing to find that relentless consistency that NHL coaches unfailingly demand.

"It's a lot different than junior," Bennett acknowledged, "because you're totally focused. Junior is a little more laid back. You still have school and other things to worry about. Now, it's all just hockey."

Coach Bob Hartley has shifted Bennett back and forth between centre and left wing and at the moment, his line – with Mikael Backlund at centre and Michael Frolik – is arguably the team's most dangerous. Bennett had another two-point night Tuesday during a 5-3 loss to the Ducks in Anaheim, bringing his total to 13 in 21 games. Against the Ducks, when Calgary was pressing for the tying goal, with goaltender Karri Ramo on the bench, Hartley had his three young forwards – Bennett, Gaudreau and Sean Monahan – all on the ice.

According to Hartley, Bennett deserves all the ice time he's getting, "but at the same time, it's an investment. If we want to fast-forward our progression as an organization and team, it will have to go through young players. We're trying to put him in as many key situations as we can.

"I think his progression has been unbelievable – his confidence, making plays with the puck, his skating, his reads. We're doing videos with Sam every day, just like we're doing with Johnny and Monny and many of our players. We're still a very young team and we still have lots to learn, but Sammy's been an unbelievable student."

For his part, Bennett said he did experience a lightbulb moment about three weeks into the season, when his play became noticeably more assertive.

"I don't know what it was, but definitely around the seventh or eighth game, I started to feel a lot more comfortable and a lot more confident," Bennett said. "I just want to play that way for the rest of the season."

Colborne noticed the change, too.

"Even in the dressing room, he's starting to feel more at home and more comfortable around the guys," Colborne said. "There isn't that awe. I remember my first time going against Jaromir Jagr or Sidney Crosby or Alex Ovechkin. You've watched these guys for 10 years, or in Jagr's case, for your whole lifetime, so you kind of sit there sometimes and you're almost caught watching. You don't see that with [Bennett] anymore. He's fearless out there; and that's not something too many guys have. He's going to be a special player for us." 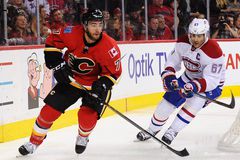 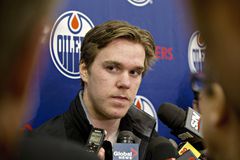 Bad start to the NHL season? No big deal, if you’re in the Pacific Division
October 29, 2015 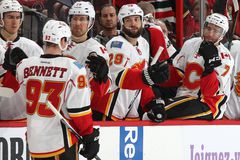