Supermodel Carol Alt told The Ottawa Citizen this week that she and her main squeeze – former Ottawa Senators centre Alexei Yashin – would like to retire to the Canadian capital when his playing days are done. Yashin, who is currently skating with CSKA Moscow of the KHL, apparently still owns a house in Kanata Lakes and his parents reside in the area. You might remember the Russian pivot's time in Ottawa ended on a rather testy note after a series of contract squabbles with team management culminated with his refusal to report for the 1999-2000 season. He was stripped of his captaincy, booed every time he touched the puck when he finally did return for the 2000-01 season, and eventually dealt to the New York Islanders. (Also there was a PR disaster in the form of his pulled $1-million donation to the National Arts Centre.) Despite all that, Alt insists Yashin never wanted to leave Ottawa and feels no bitterness about is time there. (Sens fans might feel differently.) A better idea: The lovebirds head to Long Island, where Yashin must be adored for the $2,204,000 (U.S.) annual cap hit the contract he signed in 2001 will cost the Isles through the 2014-15 season.

The Philadelphia Flyers inked Ilya Bryzgalov to a nine-year, $51-million contract in the off-season to finally end the franchise's long-standing problem between the pipes. So far, the Russian netminder has struggled, with the worst coming last Thursday in a 9-8 loss to the Winnipeg Jets. Bryzgalov came on in relief of starter Sergei Bobrovsky and gave up four goals on just 10 shots. In a postgame scrum, Bryzgalov ripped his recent play, saying he is "lost in the woods right now. … I have zero confidence in myself right now. If you throw a ball instead of a puck, I'm not going to stop it. I'm terrible and I want to apologize in front of the fans, in front of my teammates; and I don't know what's going on. I have no answer for you guys." Yikes.

Phoenix Coyotes forward Kyle Turris's agent confirmed to ESPN.com last Thursday what many have suspected for months: his client wants a trade out of the desert. The B.C.-bred forward, who is a restricted free agent, took a pass on reporting to Coyotes camp in September, when the team refused to meet his salary demands. There were reports Turris asked for between $3-million and $4-million a season, a hefty price tag for a player with just 19 goals and 27 assists in 131 career games. "This has never been about money, we've been upfront with the club from Day 1," Kurt Overhardt told ESPN. "We've respectfully requested that the player had the opportunity to move forward in his career by having a fresh start." Coyotes general manager Don Maloney continues to insist he won't trade Turris – the third-overall pick at the 2007 draft. "If he wants to play in the NHL this season, he will re-sign with us," Maloney told ESPN. "We will not trade his rights under any circumstances and are prepared to live with the consequences if he decides to sit out this, and future, seasons."

Games the New York Rangers played on the road to start the season, before finally playing at home in the refurbished Madison Square Garden last Thursday. The time away included a five-city, four-country, 13-night European trip and nine-night trip through four Western Canadian cities.

"I haven't seen Johnny in a little while. I know they're trying to get in touch with Mikael. I've been trying myself, so Mikael, if for some reason if you're listening. …"

- Eric Lindros on Toronto radio station Sportsnet 590 The FAN on efforts to put the Flyers famed Legion of Doom line – Lindros, John LeClair, Mikael Renberg – back together in conjunction with the 2012 Winter Classic game in Philadelphia.

"When Chris comes back, he'll be wearing a visor,"

"Following @justinbieber My daughter loves biebs. And so do I! Great hockey fan!" 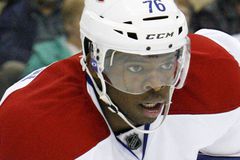