"What's it all about, Alfie?...Is it just for the moment we live?" ~ Burt Bacharach and Hal David

They had predicted storms, and all morning long dark clouds rumbled and burst over the bush country west of Canada's capital.

But this news was hardly a thunderbolt:

At 39 years of age, Ottawa Senators captain Daniel Alfredsson had decided he had another good year – perhaps even two – left in him.

At that point he would be the same age as his close friend and fellow Olympic champion, Nicklas Lidstrom, the Detroit Red Wings captain who announced this spring that the time had come for him to "walk away from the game with pride, rather than having the game walk away from me."

Alfredsson had often talked of retirement with his fellow Swede and we can only presume that Lidstrom's words were carefully digested and will linger. Lidstrom said that others might not have noticed, but he had. Of course he could have continued on – the Wings desperately need their greatest-ever defenceman – but he said "I can't cheat myself." His tank might be far from empty, but he wanted to go out when it was still smoothly pumping.

Elite athletes are unique among humans in that they die twice: first as a star player, last as a person. Some retire from their game with astonishing grace; some with grace long since lost.

It is not an easy thing to walk away from glory when it is still within reach, but those who gain a sort of third life: the what if that trails forever the likes of a Sandy Koufax or a Rocky Marciano. How, for example, do you have a 49-0 record and not go for 50, as Marciano decided? What, as well, if he had lost that 50th bout? Would he then still be the Marciano of legend? What if ... what if ...

Swedish athletes, in fact, might well hold the gold standard in going out on top. Lidstrom is just the latest. He follows golfer Annika Sorenstam, winner of 10 majors, who retired in 2008, after yet another remarkable year on tour, because she said it was time to start a family. Bjorn Borg left tennis at 26, having won 11 Grand Slam titles and five successive Wimbledons. If he could erase a small and unremarkable comeback several years later, his departure from the scene would stand as one of the most remarkable of all.

Hockey has its share of both retirement plans. Jean Béliveau went out on top, with yet another Stanley Cup win to add to the nine he already had won with the Montreal Canadiens. Gordie Howe retired gracefully but also returned gracefully three years later to play with his two sons, Marty and Mark, and played seven more years before, again, retiring with grace.

Alfredsson and his wife Bibi have four hockey-mad sons, Hugo, Loui, Fenix and William Erik, but would have to play another decade or more if he had any fancies about suiting up with any of them should they follow his career.

Then there are those who do not go quietly into the night: Doug Harvey in a St. Louis Blues jersey, Guy Lafleur as a Quebec Nordique, Claude Lemieux attempting a comeback last year, at age 43, with the San Jose Sharks. Other names come painfully to mind.

Daniel Alfredsson had the perfect year in which to call it quits. After struggling in 2010-11, he had successful back surgery and a superb season followed. He scored 27 goals and had 32 assists as his surprising Senators made the playoffs in a year when virtually every expert predicted they would fall to the bottom of the league standing. He captained one side of the all-star game, which was held in Ottawa. He was nominated for the Bill Masterton Trophy for the NHL player showing greatest sportsmanship and perseverance and was awarded the King Clancy Trophy for his leadership and community work off the ice.

Alfredsson is by far the most popular celebrity in this political town – though admittedly the competition is thin these days. His work for charities, mental health in particular, has made him a darling of Ottawa, and the fact that he is roundly booed and despised in Toronto only adds to his lustre at home.

It has long been no secret that Alfredsson has a job for life with the Senators. He is seen as a future GM. Though he and Bibi retain a summer home and family connections back in Sweden, the Alfredssons of Ottawa have become so Canadian they talk snowmobiles in summer and have been heard to tack an Ottawa-Valley "eh?" at the end of declarative sentences.

So why play on?

Simple, because he can. He proved it last year and will have to prove it again this year. Yet as the final year of his contract is for $1-million, he could well prove to be the greatest bargain in the game this season, if there is a season.

To answer the song's question, he has decided to live for the moment.

As for that larger question, it will be answered in time.

And almost certainly with grace. Bobby Butler has the remainder of contract bought out by Ottawa Senators
July 27, 2012 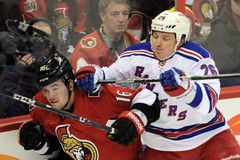