The 39-year-old announced Tuesday he will return to play out the final year of his four-year contract with the NHL club.

Alfredsson said he needed to test himself in rigorous off-season training to see if his body could withstand another NHL campaign before deciding whether to return. The result was positive.

"I've had the motivation of playing from the beginning, but I had to go through the process," the right winger said on a conference call from Sweden. "With my back problems, I haven't been able to work out as I'd like the last four years.

"And after back surgery last year, I wanted to see where I stand. I'm happy I feel the way I do."

Alfredsson will return for a 17th season with the only NHL team he has known and where he has been captain since 1999-2000.

He had suggested he might retire after last season, when he had 27 goals and 32 assists in 75 games and helped Ottawa reach the playoffs. The Senators lost in seven games in the first round to the New York Rangers.

Alfredsson did intense workouts at the Frolunda club in Sweden along with the Senators' talented young defenceman Erik Karlsson under trainer Peter Froberg that was a new program from what he did in previous off-season. He made up his mind last week he was ready to play again.

"It was my body that had to make the decision more than anything," he said. "I felt strong, that's the biggest thing.

"If I have my strength I know I can play and contribute."

Money was not a factor, as his contract was "front loaded" so that he will earn US$1 million next season on a deal that averaged $4.8 million per season.

"It's a non-issue for me," said Alfredsson, who spoke to general manager Bryan Murray about a one-year extension but decided against it.

Instead, he will play out this season and decide again next summer whether to keep going.

"I'm not saying this is my last year," he said. "If I can still play and contribute, I'll continue.

"I didn't want the pressure of going through this again with a year left on my contract. I wanted a clean sheet."

He also said staying on for the 2014 Winter Olympics in Sochi, Russia did not factor into his decision as it was too far in the future to contemplate. Alfredsson won Olympic gold in 2006 with Sweden.

The sandy-haired winger will join a growing group of NHL players in their 40s that includes stars Jaromir Jagr and Teemu Selanne. He turns 40 on Dec. 11.

His value to the club goes beyond goals and assists.

Alfredsson was a mentor to Karlsson, the 22-year-old who won the Norris Trophy after leading NHL defencemen in scoring last season. The team hopes he will stay on to do the same for Swedish prospects like Mika Zibanejad and Jakob Silfverberg.

"We hoped for this all along," said Murray, who still hopes to work out a longer-term deal. "Getting it confirmed is great for the franchise and the city and it's great for our young players.

"If they follow his work ethic we'll be a competitive team."

Murray had a Plan B in mind to acquire another skilled veteran if his captain retired, but "not to the degree of Alfredsson and what he brings to the room and the work ethic and the character of the team."

Alfredsson said the Senators look to be on the upswing with their young talent.

"I don't think we'll peak for a few more years," he said. "But we showed we can compete with anyone."

After that season, he had surgery to fix a nerve problem in his back and rebounded with a strong performance.

He was a finalist for the Bill Masterton Trophy for sportsmanship and perseverance, and won the King Clancy Trophy for leadership on and off the ice.

He decided to return after discussions with his wife and their four sons. His wife Bibbi told him it should be easier this season because a year ago the youngest was an infant, with all the sleepless nights that entails.

And he hopes to play even better now that he is confident his back troubles are in the past.

Alfredsson's history goes back to the club's early years. He was drafted 133rd overall in 1994 by Ottawa, and won the Calder Trophy as rookie of the year in 1996. 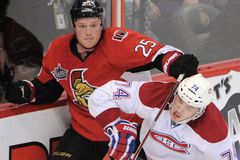 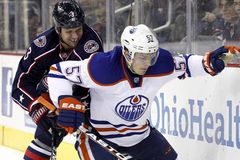