Funny how they say he plays his angles so well, as he has almost none himself.

Head, eyes, ears and mouth could all be drawn by pencil-compass: circles within circles, body frame length with not much width.

Like all hockey goaltenders, Craig Anderson looks far more formidable in gear than out, and this year – 32 years old Tuesday – he has been the most formidable of his curious, up-and-down-and-up-again career.

The goalie for the Ottawa Senators was arguably the single most important reason the much-injured Senators made the playoffs. Had Anderson not been injured himself for several weeks with an ankle sprain, he would surely have been chosen one of the finalists for the Vézina Trophy as the league's top goaltender, perhaps even the Hart Trophy as the league's most valuable player.

Anderson's .941 save percentage in the regular season was the best ever in the NHL's modern era. He has ... well ... slipped somewhat to .940 in the playoffs as his No.7 seed Senators laid waste to the No.2 seed Montreal Canadiens in five games and now trail No.1 seed Pittsburgh Penguins two games to one as they head into Wednesday's Game 4.

It was Anderson's play in Sunday's Game 3 that allowed the Senators to take Sidney Crosby and Evgeni Malkin to double overtime and claim a 2-1 victory. He stopped Crosby on a breakaway, stopped Malkin on a brilliant rush. His goal posts stopped Pittsburgh's leading goal scorer, Pascal Dupuis, and most-dangerous defenceman, Kris Letang.

So effectively did Anderson cover his net that the posts were the only hope the Penguins had. Of the 50 shots Anderson faced, only one – by Tyler Kennedy – went in, and that off two posts.

Anderson knows he was in the goaltender's sacred "zone" Sunday night in Ottawa.

"Everybody goes through peaks and valleys," he says. "Different players have games where they feel like everything they do is right. They make all the right decisions, they get all the puck luck.

"Same thing for a goalie. You're in the right spread at the right time; pucks hit you; a guy misses the net; you get help from your posts. Sometimes it's just a matter of being on the good end of some luck versus the other end, where maybe the pucks that hit the post go in."

The ringing of the iron sounds differently to goaltenders than it does to anyone else in the buildings. They do not see the puck hit, do not know for a micro-second exactly what happened. The alarm goes off; the result unknown.

"It depends if the crowd goes cheering or they give a big sigh," he says. "Kennedy made a perfect shot. It hit the post and then the crossbar and went in. Dupuis and Letang hit the posts in overtime and I just got lucky.

"Your heart stops for a second and starts up again. You've got to recover. You don't even think about it after it happens."

He laughs: "It's not a shot on goal – you actually don't even have to stop it. At the same time, you don't want to take those chances too many times."

Anderson is an American, born in Park Ridge, Ill., but who came to Canada to play major junior for the Guelph Storm. He was a backup with some promise, and the Calgary Flames drafted him in the third round, 77th overall, in the 1999 entry draft. Two seasons later he was the Storm's No.1 goalie and chosen the OHL's goaltender of the year. It looked for a time as though the Flames had their future in net solved, but the two sides could not reach a contract agreement and so Anderson decided to re-enter the draft in 2001, this time moving up four slots to 73rd overall when the Chicago Blackhawks selected him.

The Blackhawks then traded Anderson to Florida the following summer for a sixth-round pick. Florida sent him to the Rochester Americans to play in the minor leagues.

The experience, he says, forced him to grow up.

"Earlier in my career there were times when you just don't feel really good about your game," he says. "You're all excited to be there and then you have a bad day, it's like someone shot your dog.

"I think the defining moment in my career was when I went through waivers three times. It kind of changed my outlook on things. The next year I went back to the minors. You can't get any lower than that. Teams tell you they don't want you and then another team picks you up and they say, 'Oh, no, we want you – to play on our minor team.' And then you get traded.

"It's tough, it's a bumpy road. But it's not what happens to you, it's how you react. I was able to mature quite a bit and figure out that I had to change my ways a little bit to get back to the league and find a way to be successful."

The trade along that bumpy road was to the Florida Panthers where he served as backup, ironically, to his friend Tomas Vokoun, now the Pittsburgh Penguins goaltender. He played well, moving on in the summer of 2009 to the Colorado Avalanche as a free agent. He had good outings and bad, and two years ago, Colorado swapped with Ottawa for another seemingly so-so goaltender, Brian Elliott. Both saw their careers soar in new settings, Elliott now with St. Louis.

He arrived in Ottawa with only one knock: proof that he could win a playoff series. He settled that in Round 1.

"We've been doubted all year," Anderson says. "We find ways – they aren't always pretty – but we find ways to win. I think that's the definition of the 'pesky' Sen. We play for the crest on front. You can interchange any of the names on the back, guys in and out of the lineup, yet we find ways to win. You're not going to go down the list and say this guy's going to be the hero or that guy's going to be the hero. You just don't know, because everybody's contributing."

But no one as much as Craig Anderson, who finally found a team that truly wants him.

MacGregor: Spezza returns and finds his karma
May 20, 2013 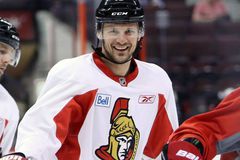 Maki: Greening’s face a testament to playoff winning hockey
May 20, 2013 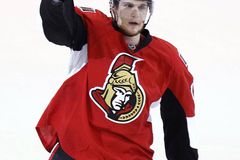 Pesky Senators vault back into series with double OT win over Penguins
May 19, 2013 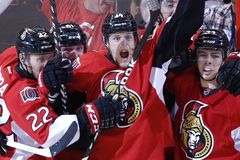 Spezza looks to rescue Sens from playoff meltdown against Pens
May 19, 2013 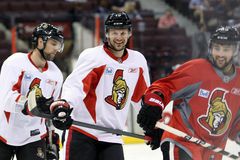 Spezza returning to Senators lineup for Game 3 against Penguins
May 18, 2013 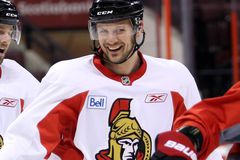 Crosby puts on a show in Penguins win over Senators
May 17, 2013 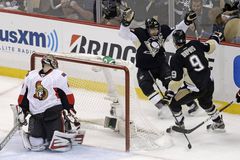 For Iginla, the move to Pittsburgh has been a change for the better
May 17, 2013 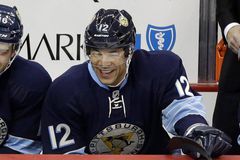