Losses, regulation and overtime, for the Buffalo Sabres in their past 21 games, dropping them out of the playoff picture in the NHL's Eastern Conference. Wonder if there's any buyer's remorse on Ville Leino (three goals, 10 points, $27-million committed over the next six years)?

Losses, regulation and overtime, for the Columbus Blue Jackets in their first 36 games, prompting patient GM Scott Howson to acknowledge that changes will now be forthcoming. Wonder if there's any buyer's remorse on Jeff Carter (10 goals, 16 points, $58.5-million committed over the next 11 years and acquired from Philadelphia at the cost of Jacob Voracek, a first-round pick that turned into Sean Couturier and a third-rounder that became Nick Cousins).

"He's going to be out for a while. He's got a serious enough injury on a hit from behind again that he's going to miss weeks." ~ Lindy Ruff

The Buffalo Sabres head coach discusses Andrej Sekera, who suffered an upper-body injury while getting boarded by Eric Boulton. But repeat after me, there is no concussion epidemic in the NHL.

"I do regret it. Because if I didn't say anything, I wouldn't have missed those six games." ~ Kyle Quincey

The Colorado Avalanche player wishes he'd kept quiet about a minor groin injury that kept him out for six games – two to recuperate and the next four as a healthy scratch because coach Joe Sacco didn't want to break up a winning lineup, even to reinsert his highest scoring defenceman and ice-time leader. The Avs finally lost, paving the way for Quincey to return Thursday against Phoenix.

Just watched two opposing coaches argue on bench & then literally walk out to the parking lot at a minor midget game. The Hockey Business.

Sault Ste. Marie Greyhounds coach Kyle Dubas noting how passions run deep at every level, not just in the NHL.

The winner of the first quarter's most surprising team, the Minnesota Wild, came crashing down to earth in the second half of December, undermined largely by the injury bug which, for a time, claimed captain Mikko Koivu (since returned to the lineup) along with Devin Setoguchi (still out) and more recently, two members of its young no-name defence corps (Jared Spurgeon, Clayton Stoner). Through its many incarnations, Minnesota always had top-flight goaltending; but the off-season decision to trade away Brent Burns looked as if it left its blueline awfully thin. Not so. New coach Mike Yeo brought half his defence with him from AHL Houston and they've all been effective for the Wild. But an organization's depth can only run so deep and when the Wild lost in a shootout Wednesday night, it marked its eighth consecutive loss, the first seven came in regulation. On Dec. 6, the Wild had the No. 1 point total in the NHL (37, off a 17-7-3 record). Now, they're middle of the pack – and the pack is closing fast.

Meanwhile, those ex-Minnesotans down in Dallas had a good news-bad news week on the injury front. Starting goalie Kari Lehtonen, out since Nov. 26 with a groin injury, has been cleared to play and was in the lineup Thursday night against Columbus. To make way for Lehtonen, Andrew Raycroft was placed on waivers. Raycroft had a decent start as Lehtonen's replacement, but when he faltered, Richard Bachman was taking care of business and kept the Stars in the playoff mix. Lehtonen's return couldn't have come at a better time, given that both the Stars' two most experienced defencemen, Stéphane Robidas and Sheldon Souray, both of whom out with foot injuries, will miss up to two weeks.

And just in case you have something better to do Monday during the 2012 Winter Classic, EA Sports NHL ran a simulation of the game and had the Flyers emerging as 3-1 winners. The Rangers' Artem Anisimov opened the scoring, but the Flyers came from behind to win on goals by James Van Riemsdyk, Daniel Brière and Jaromir Jagr. And just in case you're dismissive of the results of a video game, the EA Sports NHL series has had an uncanny run of it lately, correctly predicting the Blackhawks as 2010 Stanley Cup champions, the Canucks as 2011 Presidents' Trophy winners and that the Bruins and Canucks would meet in last year's Stanley Cup final. Maybe playing outdoors can even cure Flyers' goaltender Ilya Bryzgalov of whatever is ailing his game again. Bryzgalov's GAA crept above 3.00 this week after another underwhelming performance in Wednesday's 5-1 loss to Tampa, in which he surrendered five goals on only 16 shots. And that .890 save percentage is approach Steve Mason territory. Ugly.

Should defencemen keep two hands on the stick?
December 31, 2011 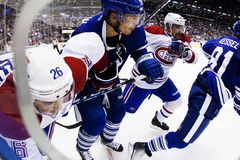