Art Dorrington was hailed by some as the Jackie Robinson of hockey for his trailblazing role in integrating the sport in the United States.

He was 20 when the Nova Scotia resident was scouted by the New York Rangers of the National Hockey League. He signed a contract with the organization and was assigned to the minor league Atlantic City Sea Gulls. A brief article in The New York Times on the signing was headlined: First Negro in U.S. hockey.

Mr. Dorrington, who has died at 87, made the New Jersey resort city his home. In earning citizenship, he became the first black player in professional hockey. A top prospect in his youth, he never played an NHL game, but became a legendary figure in Atlantic City, where a rink bears his name.

A demon skater, Mr. Dorrington also had a sniper's eye, leading the professional Eastern Hockey League in goal-scoring in 1954-55 with 33 markers in 49 games for the Washington Lions.

Like baseball's Mr. Robinson, Mr. Dorrington suffered from the pernicious rules of Jim Crow segregation in the United States while enduring racial slurs on both sides of the border.

James Arthur Dorrington was born on March 13, 1930, in Truro, N.S., to the former Mabel Mentis and William Dorrington, a landscaper. He learned to skate at age 3. His rinks were the icy street in front of his home and the frozen marshland surrounding his neighbourhood. As a teenager, he was a key member of a Truro Bearcats hockey team that scored an 11-8 victory over the Charlottetown Canadiens to claim the Maritime midget (under-17) championship.

Mr. Dorrington played briefly for the junior Halifax St. Mary's before joining the senior Bearcats. The 5-foot-9, 165-pound centre also played for the Stellarton Royals and Amherst Ramblers in his home province, as well as skating for the Truro Sheiks, an all-black team that played against other black teams in the Maritimes.

In March, 1950, the Dorrington household was shaken by the sudden death of Douglas Dorrington, 19, who was taken to hospital after being seriously hurt in a hockey game. He soon after died with newspapers reporting the hockey injury as the cause, although his death certificate cites meningitis incurred after suffering a hip injury. (Doug Dorrington was referred to in reports as Art Dorrington's brother, although they were cousins raised in the same household.)

Five months later, Art Dorrington travelled to the United States to play for a senior amateur team in New Milford, Conn. Mr. Dorrington stopped in New York for a practice session at Madison Square Garden, where he was scouted by the Rangers. They signed him to a contract paying $85 per week during the hockey season with a $100 signing bonus. He was supposed to skate for the New York Rovers, who were on a lengthy road trip. Bored and eager to play, he was instead assigned to Atlantic City, which he soon made his permanent home. The rookie centre scored 18 goals with 16 assists in 49 games.

That summer, he swapped his hockey sweater for a baseball uniform, as he patrolled the outfield for the independent Rockets of Wellsville, N.Y., a team in the Pony (Pennsylvania-Ontario-New York) League, a Class-D circuit at the bottom of baseball's alphabet ladder.

Mr. Dorrington later played hockey for the Johnstown Jets and the Philadelphia Ramblers.

"I went to places in the Eastern League like Washington, Baltimore, Charlotte, Greensboro and the rest of the team would go into a hotel or a restaurant, and I wouldn't be allowed to go in," he told Cecil Harris, author of the book Breaking the Ice.

On the road, he could not always room in the same hotels as his teammates, so stayed with black families, or rented rooms in black-owned hotels.

"All I could do was go to the rink and play hockey," he once told the Trentonian newspaper. "I had to live and eat with the other black people."

In Troy, Ohio, a hotel owner allowed Mr. Dorrington use of a room only to bar him from the hotel restaurant, he once told the Shore News Today newspaper of Pleasantville, N.J. Angry teammates responded by trashing a room.

In 1956, he was drafted into the U.S. Army. The Ramblers responded with a going-away ceremony for their top scorer before his final game during which he got a clock, a scrapbook of clippings and a cheque for $100. After basic training, he was posted to Europe for 22 months.

He returned to the Ramblers midway through the 1957-58 season only to suffer a grievous injury, in only his 11th game back, when kneed by Ed Calhoun of the Clinton Comets. The impact broke the femur in Mr. Dorrington's left leg. "It's the kind of thing you'd find after an automobile accident," the surgeon who operated on the player told reporters. His pro career was over.

A week before Mr. Dorrington suffered his injury, Willie O'Ree, a right winger from Fredericton, became the first black player in the NHL when called up to replace an injured Boston Bruin. Mr. O'Ree, who has also been described as the Jackie Robinson of hockey, was honoured by the NHL in an on-ice ceremony before a Bruins game on Jan. 18, the 60th anniversary of Mr. O'Ree's first NHL game.

The history of non-white hockey players is still being researched and debated by hockey historians. While some reports hail Mr. O'Ree for breaking the NHL colour barrier, Larry Kwong, a Chinese-Canadian from Vernon, B.C., skated in a game for the Rangers a decade earlier in 1948. Other black athletes played senior hockey for Canadian-based teams, most notably Herb Carnegie, a playmaking forward from Toronto, who in the early 1940s centred an all-black line with older brother Oscar (Ossie) Carnegie and Manny McIntyre for a team in Timmins, Ont. In 1931, Henry (Buddy) Maracle, a Mohawk from Ayr, Ont., played 11 games for the NHL Rangers. Fred Sasakamoose, an Ahtahkakoop Cree from Saskatchewan who played 11 games for the Chicago Black Hawks late in the 1953-54 season, is regarded as the first player with treaty status to skate in the NHL. Mr. Sasakamoose was recently named a member of the Order of Canada

After recovering from his injury, Mr. Dorrington skated for the amateur Casino hockey club. In summer, he played baseball for an all-black Atlantic City barnstorming team called the Hap Farley All-Stars, whose manager was John Henry (Pop) Lloyd, a school custodian. Mr. Lloyd, a shortstop, had been a Negro Leagues star in the era of segregated baseball. Years later, Mr. Dorrington would add his voice to a successful campaign to have Mr. Lloyd enshrined in the Baseball Hall of Fame at Cooperstown, N.Y.

After hockey, Mr. Dorrington managed a hardware store and became a deputy sheriff for the Atlantic County Sheriff's Department. He served as softball commissioner for Atlantic City for 32 years and worked behind the plate as an umpire for 34 seasons.

In 1998, he and his wife founded the Art Dorrington Ice Hockey Foundation, a program offering free hockey to keep youth "on the ice, off the street."

Mr. Dorrington died in Atlantic City on Dec. 29. He leaves his daughter, Judah Dorrington. A complete list of survivors was unavailable. He was predeceased by his wife, Dorothie, a well-known educator in Atlantic City who died in 2005.

It was while posted in West Germany that Mr. Dorrington first heard Viennese waltzes played at an ice rink. He spontaneously devised elaborate skating routines to the music, a practice he repeated back home in retirement when he supervised public skating sessions. 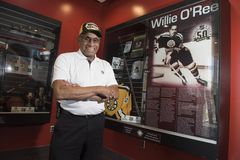 Trailblazer Paris Jr. would like to see more black coaches and executives
June 28, 2013 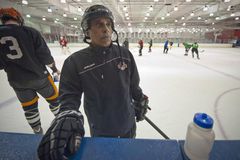