Former hockey players aren’t often seen as fonts of existential angst, but when a concussion from an ugly fight forced Nick Kypreos to retire from the NHL in 1998, at 32, he admits he was adrift: “What in the hell could I do besides playing hockey?” he writes in Undrafted, a new set of memoirs out next week. He caught a lucky break, landing at a start-up all-sports network, but he wasn’t ready for prime time, and he knew it; the anxiety was almost crippling. “When I started at Sportsnet, they told me to just be myself. What the hell is that? I knew who I was, but not in front of a million people. I constantly doubted myself.”

For most of his life up to that point, Kypreos had done what others told him to do, changing himself to fit into someone else’s master plan. When he began playing hockey, he had raw skills and smarts and drive – at 19, he had the third-highest goal total in the OHL – but as he moved up through the system and found it tougher to score, he came to understand he stood a better chance of staying in the game if he dropped the gloves more often. He became an enforcer, creating traffic in front of goalies and patrolling the ice to visit retribution upon anyone who bothered his teammates.

As with hockey, so it was with broadcasting. After a rough couple of years at Sportsnet, Kypreos found his sweet spot, evolving into the role of an NHL insider who could deliver trade scoops and other news. He was with the network for more than 20 years, until he and a few high-profile colleagues were cut loose in the summer of 2019.

And now for perhaps the first time in his adult life, Kypreos is on his own, trying to figure out who he is, and what lane he is supposed to occupy.

To help himself go forward, he opted to first go back, collaborating with author Perry Lefko for a blow-by-blow account of his life and career that takes in the good (his 1994 Stanley Cup win with the Mark Messier-led Rangers), the bad (tales of hazing, and bullying coaches), and the ugly (an errant stick that broke five of his teeth at age 20; a two-inch screw drilled into his collarbone to fix a separated shoulder; a broken leg; that infamous preseason fight in September, 1997, that caused brain lesions and forced him to finally leave the pro game behind).

Kypreos’s story begins with the arrival in Canada of his father, George, sent to Toronto at 17 to provide for his family back in Sparta, Greece. George loved the speed and grace of hockey, and it helped him find a lane within his new country: When he could afford it, he would wait hours in line outside Maple Leaf Gardens to buy a $2 standing-room-only ticket. He passed that love of the game to Nick, taking him in 1974 to his first Leafs game, against the Kansas City Scouts, an experience that left the young boy dazzled with the arena’s Technicolor array of gold, red, green, grey and blue seats. “When we left the building, I felt like a real Canadian for maybe the first time,” Kypreos writes.

In time, he learned the thrills came with an undertow of injury and toxicity. While he was luckily able to avoid being hazed, Kypreos witnessed horrific acts that left his midget and junior teammates physically and emotionally scarred. The cruelty extended into the pro leagues, where the warrior mindset among players has given coaches the licence to act savagely without consequence.

When some of those stories began to break into the open over the past couple of years, Kypreos felt a twinge of regret that he hadn’t used his network platform to help them surface. “Unfortunately, I didn’t look at myself as a journalist,” he said. “So it would have been really outside of my wheelhouse to go cover a story like that. And I didn’t have the tools to do it back then. I wish I did, but I just stayed within my lane.”

Which isn’t to say he didn’t stretch himself. In 2009, he won praise for an interview he did with Mike Danton, a former NHL player who had served more than five years in prison for conspiracy to commit murder.

And when Rogers took over the Hockey Night in Canada broadcasts in the fall of 2014, Kypreos became part of the in-studio team.

Still, by August, 2019, he could tell things were changing. There was new management, and budgets were being cut. “I was not prepared to move forward in an industry where it was moving backwards, and I wouldn’t know year to year exactly how much job security I would have,” he said.

He left, and began to figure out his next step. He and Lefko began working on the book, whose title comes from the fact that Kypreos was never drafted by an NHL team. In the spring, he helped his wife, Anne-Marie, and a friend of hers launch Little Buddha Cocktail Co., which makes ready-to-drink alcoholic beverages. And when the NHL returned to play in the summer, Kypreos began a daily podcast and live YouTube show with his old friend, Doug MacLean, who had also parted ways with Sportsnet.

The show is produced by Line Movement, an online sports-betting company where Kypreos serves as director of hockey operations.

It’s called Real Kyper at Noon. So: Does this mean he finally knows who he is?

“No,” he said, sounding almost comically exasperated. "I’m 54 years old and I feel I’m 32 again, just starting out. And you don’t necessarily figure out who you are, ever, but you do go through a process of elimination: ‘I’m not that, I’m not that! I’m not sure who I am, but I’m not this!’

“I’ve got more life experiences that I can draw on, so maybe I can breathe this time around,” he said with a laugh, “instead of holding my breath. But you still get a little nervous, you still get some anxiety, but you hope after 30 years of dealing with stuff in pro hockey and broadcasting, that it would make you a little tougher, your skin a little thicker, to be able to adapt and overcome.”

The one thing he does know is that he feels unfettered. At Sportsnet, especially after Rogers signed its $5.2-billion, 12-year deal with the NHL, he felt he needed to hold his tongue.

"It happens everywhere you are [at any network]. It’s a partnership. Rogers is in bed with the league, and the league is in bed with Rogers. You don’t hurt each other, that’s just common business sense. And as a broadcaster, if you don’t pick up those vibes? You’re not going to last very long, you’re going to lose your job!”

Now, in the digital world, without those ties, “you have the freedom to be authentic," he said. 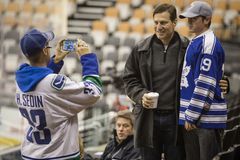 Opinion
Sports broadcaster Nick Kypreos on a new bilingualism
May 2, 2013 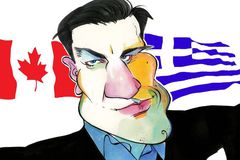