Donna Spencer
CALGARY
The Canadian Press
Published May 24, 2021 Updated May 24, 2021
Comments
Text Size
Please log in to listen to this story. Also available in French and Mandarin. Log In Create Free Account

Marie-Philip Poulin was finally able to put her prodigious talent with the puck to use in a real game.

Her short-handed goal on a third-period breakaway sealed Bauer’s 3-2 win Monday over Sonnet to open the Secret Cup women’s hockey tournament in Calgary.

A golden-goal scorer for Canada in both the 2010 and 2014 Olympic Games, Poulin played her first meaningful game in over a year because of the COVID-19 pandemic.

“I think the last year we’ve been missing a lot of women’s hockey,” said the 30-year-old from Beauceville, Que.

“Right now, being able to put on our games and having highlights and showing what we can do, and putting the best product on the ice, it’s so important for the little girls out there.”

Their goal is a sustainable league with a living wage and the competitive supports the men’s professional leagues have.

Natalie Spooner and defender Ella Shelton scored for Sonnet. Shea Tiley stopped 39 shots in the loss in a Seven Chiefs Sportsplex devoid of spectators on the Tsuut’ina Nation.

The PWHPA adopted many of Hockey Canada’s quarantine and testing protocols used at the 2021 world junior men’s hockey championship in Edmonton.

The last time PWHPA games were played in Canada before Monday was Jan. 11-12, 2020 in Toronto.

Of the 28 players invited to try out for Canada’s Olympic team starting this summer, 21 are Secret Cup participants.

Another half dozen have played for Canada on previous Olympic and world championship squads.

The cancellation of the 2020 and 2021 women’s world hockey championship in Nova Scotia also contributed to a Canadian women’s hockey desert wrought by the pandemic.

Because Bauer has 17 players in the national-team pool, it had an exemption from Quebec’s pandemic restrictions to keep practising.

Sonnet didn’t have that luxury in Toronto.

“Unfortunately, because of Toronto’s restrictions, we haven’t been able to practice as a team all year,” Sonnet forward Sarah Nurse said.

“’'This was our second time on the ice together. At the end of the day, nobody really cares. We have to perform.

“I think we were all pretty giddy this morning. It’s the first time we’ve been on the ice playing any games in about 14 months.”

Montreal and Calgary meet Tuesday at the Seven Nations Sportsplex followed by games there Wednesday and Thursday.

Round-robin games Friday and Saturday, as well as Sunday’s final, will be played at the Saddledome.

Sportsnet is streaming all games and broadcasting the final three.

The teams play each other twice in a round robin with results augmented by a points system.

A win is worth two points, an overtime win 1.5, a shootout win one point, and half a point for an overtime or shootout loss.

A short-handed goal, hat trick, shutout, or scoring five goals or more in a game is each worth one additional point, so Poulin added an extra point to her team’s tally Monday.

The two teams with the most points at the end of the round robin Saturday advance to Sunday’s final.

“It’s different,” Poulin said. “That’s something we’re not used to with having that extra point.

“You want to play the game the right way. If we have the chance to have those extra points, it’s going to be exciting.”

After Poulin’s short-hander made it 3-1 at 13:24 of the third period, the puck deflected off Spooner’s skate and in with three seconds remaining in the game.

Ottawa forward Leslie tipped in a shot from the blueline at 9:48 for Bauer. Ambrose of Keswick, Ont., scored a power-play goal at 6:12 of the second period to pull Bauer even at 1-1.

Tiley of Owen Sound, Ont., stoned Leslie on a two-on-zero with Bauer teammate Kristin O’Neill midway through the second period.

Canada’s Olympic team will take three goaltenders to the 2022 Winter Olympics in Beijing.

Desbiens of La Malbaie, Que., will be one of them alongside Kristen Campbell of Brandon, Man., and Emerance Maschmeyer of Bruderheim, Alta. 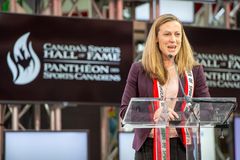 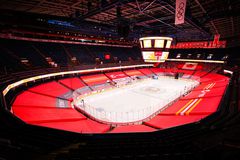 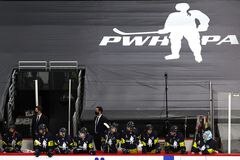