After years of often-contentious debate, Calgary appears close to getting a new hockey arena.

Details of a tentative agreement negotiated between city officials and the Calgary Flames’ ownership group are expected to be presented to councillors at a meeting on Monday.

The proposal calls for an 18,000-seat facility to be built downtown as the centrepiece of a cultural and entertainment district. If approved, the arena would sit on land that currently serves as a parking lot for the Stampede. The estimated cost is between $550-million and $600-million.

Any deal that includes public financing will likely cause an outcry from some Calgarians, though. In November of 2018, residents voted 56-per-cent against the city making a $4-billion bid to hold the 2026 Winter Olympics.

The building would replace the Scotiabank Saddledome, the third-oldest arena in the NHL after Madison Square Garden in New York and the Nassau Veterans Memorial Coliseum in Uniondale, N.Y.

It is expected that the City of Calgary would retain ownership of the new building as part of the deal. The Saddledome is owned by the city, but managed by the Calgary Sports and Entertainment Group, the entity that owns the Flames.

Discussions about the need for a new arena in Calgary have been held in fits and starts for years.

In 2015, Calgary Sports and Entertainment proposed building a complex at the western edge of downtown that would feature an arena and football stadium to replace the Saddledome and McMahon Stadium, the home of the CFL’s Stampeders. The proposal was rejected by city council, which supported a new hockey venue being built adjacent to the Saddledome.

Negotiations between the parties broke off in 2017, but resumed in the fall of 2018 when city councillors asked to see if the sides could find common ground. Previous negotiations fell apart over disagreements over the shared costs.

On Friday, Jeff Davison, the chairman of Calgary city council’s event-centre-assessment committee, hinted on social media that a breakthrough had occurred. On Twitter, Davison said talks about a new deal were continuing, and that he anticipated details to be made public on Monday after a briefing with city council. It is not expected that construction could start before sometime in 2020.

The Flames ownership group deferred when asked to comment.

However, Calgary Mayor Naheed Nenshi, issued a statement through a spokesperson on Sunday: “Council passed a motion some months ago, which very clearly said that should any deal be made, it has to meet all these principles, the first of which is any public money must have public benefit. I am hopeful there will be some stuff to talk about with the public on Monday.”

The Saddledome was constructed at a cost of $97-million and has served as the Flames home rink since 1983. Wayne Gretzky and the mustachioed Lanny McDonald, both later inducted into the Hockey Hall of Fame, took the ceremonial puck drop before the Edmonton Oilers and Flames played in the first game.

The arena, with a roof shaped like a saddle, was host of the NHL all-star game in 1985, hockey and figure skating during the 1988 Winter Olympics, and was the site of Stanley Cup finals series in 1986, 1989 and 2004. Stevie Ray Vaughan and the Moody Blues played in its first concert a month after its opening.

When it opened in 1983, the Saddledome helped boost morale in the city as it was experiencing a significant economic downturn caused by the collapse of the international oil market, high interest rates and the federal government’s National Energy Program. A new arena could likewise raise spirits in Calgary, which is in the midst of another oil-related downturn.

The proposal calls for the arena to be built at the intersection of 12th Avenue and Fourth Street South East in the neighbourhood of Victoria Park. It is hoped that a new venue would stimulate investment in the surrounding area, similar to what has occurred around Rogers Place in downtown Edmonton.

Darren Moulds, who operates the Vagabond restaurant sports bar directly across from the expected arena site, is thrilled it could finally come to fruition. He and his wife, Megan Mckee, bought an existing business five years ago and have held onto it for that reason.

“It was a long-term play where I figured we would benefit if we could wait it out,” Moulds says. “It took a little longer than I expected, but it is a good thing.”

The Flames ownership group estimates the club’s annual economic impact at $481-million, and says it supports 5,850 full- and part-time jobs.

“[Some] people say we don’t need it, but it’s more than just an arena for the Flames,” Moulds says. “I see this as a long-term investment for a city that needs something,” he says.

Although the Saddledome attracts some concerts, some major entertainment artists bypass it because the roof is unable to support massive lights, speakers and special effects.

“There are a lot of people that drive from Lethbridge and Calgary to go to concerts at Rogers Place that we are unable to attract here with an older venue,” Moulds says. “That amounts to a lot of revenue being lost.”

Moulds muses that he moved into the neighbourhood 11 years ago. He says there was a sign at the edge of the parking lot where the arena is expected to be built. 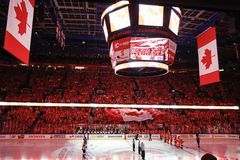 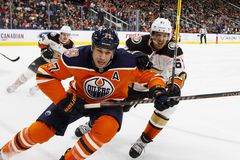 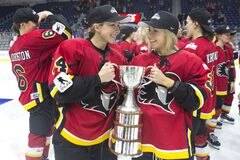