Jayna Hefford wants to see the Canadian Women’s Hockey League break its own attendance record this weekend when 34 of the world’s top female hockey players take to the ice in Toronto.

Sunday’s CWHL all-star game will be the first major event since the five-time Olympic medalist took over the reins of this six-team professional hockey league. The interim commissioner points out that the best-ever attendance at any CWHL game was 8,000, set at the 2017 all-star game, and a new high is very realistic. The league – which comprises four Canadian teams, a Chinese squad and one in Worchester, N.Y. – is trying to cast its net wide to engage new fans.

“I would challenge people who have never seen a women’s hockey game that this is the one you want to come to. It will have all the best players on the ice at the same time, inside Scotiabank Arena, and the Maple Leafs are partnering with us on this which speaks to the credibility,” said Hefford, who was recently also inducted into the Hockey Hall of Fame. “I really believe in the product – it’s good entertainment at an affordable price. Can we get 15,000 fans? I think we can some day. If we get 10,000 Sunday we’d be happy – 15,000 we’d be ecstatic.”

On display will be the best of a league that is home to national team athletes such as Canadian captain and league scoring leader Marie-Philip Poulin, U.S standout Hilary Knight and Finnish star goalie Noora Raty. Of the 34 all-stars voted by fans into Sunday’s game, 20 are Olympic medalists. Three have won the Patty Kazmaier Award, given annually to the top player in NCAA women’s hockey.

In December, 2013, in the lead-up to the 2014 Sochi Olympics, the Canadian and U.S. national teams played a series of exhibition games across North America and drew a crowd of 17,227 for their contest at Scotiabank Arena. Can the same players – wearing their club jerseys – draw big numbers too?

“I played in that building with Team USA, and it was quite an atmosphere, so I don’t see why it should be any different for two teams of many of those same players playing as CWHL all-stars,” said Knight, who will represent Les Canadiennes de Montréal in Sunday’s game. “One of the hurdles we’re trying to overcome is getting the message to people that this is the professional league where we all play and you don’t have to wait four years to see us or wait for a world championships to pop up on TV. The best of the best will be in Toronto this weekend.”

The all-star game is one of a handful of CWHL games broadcast nationally on Sportsnet this season.

There will be some twists to the event this year, as the well-connected Hefford and her staff work to bolster the league’s profile – signs of the fresh eyes and new energy she vowed to bring to the job.

The Barenaked Ladies will sing the national anthem, and Leafs legend Doug Gilmour will drop the ceremonial puck. Celebrity coaches will include retired NHL goalies Curtis Joseph and Glenn Healy, Canadian Olympic speed skater Anastasia Bucsis and comedian Gerry Dee, who promoted the game with some tweets chirping the players.

Through a partnership with the Leafs, the NHL team will take care of the game-day operations inside their home rink. Superstars Auston Matthews and Mitch Marner made promotional videos with CWHL players.

“By hearing the message come from well-known, influential people, we’re hoping it makes people say, ‘I should really go check this out,’ because when they do come watch us for the first time they’re almost always pleasantly surprised and say, ‘Wow, this is great hockey! It’s really fast,' ” said Toronto Furies forward Natalie Spooner, a two-time Olympic medalist. “It’s all about getting people out for the first time.”

For the first time on a CWHL all-star weekend, the players will do community outreach in the city, visiting Ronald McDonald House and a blood donation clinic and hosting a kids’ sports day at Maple Leaf Sports & Entertainment’s LaunchPad. A few players will show up for a surprise guest coaching appearance at a local girls’ hockey game.

“The time we spend out meeting people, that’s the most important part of the weekend, honestly,” said Montreal forward Jill Saulnier, who earned silver with Canada at the 2018 Olympics. “Growing up in Halifax, I never met an Olympian or a female pro hockey player. So being able to meet kids up close and show them first-hand what’s possible, that’s a difference maker. Players in our league always make the time for those connections.”

Hefford joined forces on a ticket campaign with a friend from Toronto’s tech community, which like pro sports is an industry working hard to include and promote women. Her friend Raymond Luk, the chief executive of tech startup Hockeystick.co, has vowed to match every $20 ticket purchased for Sunday’s game. There are also plans for a networking meetup at the game for local tech entrepreneurs.

“We had a great chat about the idea that, in a lot of ways, women’s hockey is like those tech startups who have to fight for everything they get and prove themselves time and time again as they climb to the top,” Hefford said. “Our ideas aligned really nicely. When you’re a startup, you support other people who are in the same situation.”

The CWHL all-star game has been held yearly since the 2014-15 season except for last year, due to the 2018 Pyeongchang Olympic Games, which featured 21 CWHL players.

There has been lots of outreach to area youth hockey programs to attend the game – both male and female – and the pregame celebrations on Sunday will see each all-star skate out with a minor hockey player, both boys and girls.

“I think the old way of thinking was target the girls, fill the place up with young girls at your games. But to me, and I have a son myself, I think our players are great role models for anyone to look up to, not just little girls,” Hefford said. “We’re past that old way of thinking that it’s just young girls we should be trying to attract. Our league provides skilled and entertaining hockey that everyone will enjoy watching.” 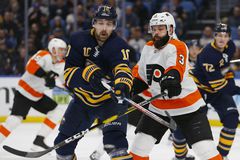