Frederik Andersen was back in the net for the Maple Leafs on Thursday night. That is both good and bad news.

The Toronto goalie returned to the lineup after missing four games with a neck injury and had a puck elude him on the first shot of the game. Then he gave up another on the first volley of the second period, causing an awkward murmur to spread through the crowd at Scotiabank Arena.

After 21 seconds in the third, he was beaten again. The Maple Leafs had climbed back to within 2-1 but never got closer. They were beaten 3-2 by the Dallas Stars.

It wasn’t the boost that the Maple Leafs hoped for; it was a rocky reminder of Andersen’s erratic play before he was hurt against the Florida Panthers on Feb. 4. In the seven games previous to that, he had gone 2-3-2 with an .877 save percentage.

Between them the teams combined for only nine shots in the first period. The Maple Leafs had just three, and their first did not occur for more than 11 minutes. There were so many swings and misses they looked like American League pitchers in the batter’s box. They had as many giveaways as shots taken.

More went on off the ice than on it for the first 20 minutes. Players on both benches stood to acknowledge the 1,000th game of Stars winger Andrew Cogliano’s NHL career. Toronto newspaper columnist Christie Blatchford, who died of lung cancer on Wednesday, was remembered with a tribute during a timeout. A spectator, Hazel McCallion, was cheered on the occasion of her 99th birthday. An elderly couple smooched on the Kiss Cam on Valentine’s Eve.

Toronto fans had nothing to cheer about until Kyle Clifford, the hard-knuckle winger obtained last week from the Los Angeles Kings, engaged in a scrap with Jamie Oleksiak with 14:05 left in the second period. Clifford, who is 6-foot-2, landed several hard punches on the 6-foot-7 defenceman before pulling him down.

The pugilism proved to be a wake-up call for the home team. The Maple Leafs immediately picked up the pace and cut their disadvantage to 2-1 when Auston Matthews scored on a power play 8:39 before the second intermission.

“It was a spark for our club and everybody involved,” Jake Muzzin, the Toronto defenceman, said. “It was a big moment for us.”

The goal, which came on a wrist shot, was Matthews’s 41st of the season and moved him into a tie for the NHL lead with David Pastrnak of Boston.

Matthews, who had not scored in Toronto’s previous two games, has not gone three games in a row without scoring since early December.

Zach Hyman scored his 17th goal with Andersen pulled for another attacker, with 1:19 remaining.

Andersen declared himself fit after Thursday’s morning skate and reclaimed his starting job.

“I’ve been feeling good,” he said. “I’ve been patient with the injury and feel ready to go again.”

Despite his recent funk, he remains tied for second among goalies with 24 victories. He has a save percentage over .900 in 57 per cent of his starts this season, the sixth highest among net minders who have appeared in 40 games.

The first goal wasn’t his fault. It came after a dreadful turnover behind Toronto’s net by John Tavares. Denis Gurianov snapped a shot past Andersen from 10 feet away 1:20 into the game. On the second goal, Radek Faksa beat him with a backhand on a breakaway 24 seconds into the second.

Dallas put the game away on a power-play goal by Tyler Seguin 21 seconds into the third. It came after a tripping penalty on Tavares, who had a game to forget.

The goal was only the 12th of the season for Seguin, and his first in 17 games. The six-time all-star had not scored since Dec. 28.

He entered the night with 11 goals in 56 games. In nine previous seasons, he has scored 33 or more four times and 40 once.

“There is a lot of noise about him not scoring, and we try to deflect that,” Dallas coach Rick Bowness said. “He is doing a lot of things to help us win.”

Jason Robertson, a 20-year-old forward, was given an assist on the goal by Seguin. Robertson was playing in his first NHL game.

Cogliano had an assist on the Stars’ second goal in Game No. 1,000. As of Thursday, he has appeared in 1,000 out of a possible 1,007 regular-season games. The Toronto native is just one of 30 active players to reach the milestone, having accomplished it over 13 seasons with Edmonton, Anaheim and Dallas.

The Maple Leafs are 5-3-1 over their past nine games and remain third in the Atlantic Division, two points ahead of Florida. The Panthers lost to Philadelphia 6-2 on Thursday night.

Toronto’s next game is Saturday in Ottawa, with games in Buffalo on Sunday and Tuesday in Pittsburgh. They return home against the Penguins on Feb. 20.

The team will be without winger Andreas Johnsson, who suffered a knee injury during the first period in a collision with teammate Kasperi Kapanen. Head coach Sheldon Keefe said a more accurate diagnosis will come on Friday, but said Johnsson will be out long-term.

Dallas avenged a loss to the Maple Leafs on Jan. 29. That was Andersen’s last victory. On Thursday night, he had 16 saves.

The Stars took the lead and then played tight defence the rest of the way.

“They are a real tough team to play against when you are chasing the game,” Keefe said. “You have to adapt and I don’t think we did a good job of that.”

He thought Andersen was okay.

“I thought we made it very challenging for him,” Keefe said. “We didn’t give him a chance to get comfortable. We have to do a better job of supporting him.” 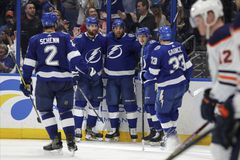 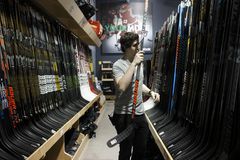 Jets players happy to stick with Maurice, say bad stretches are ‘on everyone’
February 13, 2020 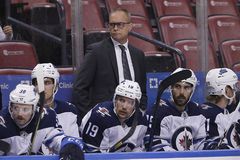