He took part in all drills, looking neither impeded nor particularly spry. He’s been gone a week with what the team had called a neck injury.

All hockey injuries are treated as state-level secrets. You could watch a guy get his leg turned 90 degrees the wrong way and after the game you will be told he has a possible contusion in the subcranial area.

But Andersen’s reticence was notable. He didn’t want to say how he’d gotten hurt. Or whether he was still hurt. Or if he’d ever been hurt in this way before.

“We’re in the process of taking the right steps in the right fashion,” Andersen said, even more mumbly than usual. “[Tuesday’s game against Arizona is] not ruled out, but we’ll see.”

A good deal hangs on that seeing. Andersen seems to know that, just right now, loose lips sink ships. And this one is listing.

One way of looking at Andersen’s injury is that it was a spur to action. Michael Hutchinson replaced him, in the sense that Hutchinson is also a bipedal human and can therefore wear goalie pads. That’s about the end of the similarity.

The Leafs were roundly blasted (again) for their lack of preparedness. You got the sense that, for the first time in a very long time, the criticism penetrated beyond the locker room and into the executive suites.

The Leafs made the sort of emergency trade that got you wondering why they hadn’t made it when things were less of an emergency.

On the subject of equipment change, he seemed amazed the Leafs had been able to arrange blue-and-white combat dress: “I thought I was going to wear a white bucket out there.”

It’s hockey in Toronto, which is a topsy-turvy world. In this one milieu, Los Angeles is the backwater, and Toronto’s the place where you can get anything you want.

After Monday’s practice, Campbell was pigeon-holed by a clutch of reporters. He held court for a good half-hour. Campbell made his NHL debut more than six years ago, and that’s probably the most he’s ever been interviewed – cumulatively.

This is the heart of the pressure of playing for the Leafs. You have played hockey before, but you’ve never played hockey in Toronto. The sport’s the same, the circumstances are completely different.

Since the Brendan Shanahan/Mike Babcock New Dawn of 2015, that reality had been temporarily suspended. It’s over now.

Once again, everything feels up in the air. A whole bunch of little things – Andersen’s neck, Campbell’s confidence, head coach Sheldon Keefe’s nerve, the local media’s bloodlust – could tip it off balance.

That is not a good way for a professional hockey team to exist, but it is the Toronto way.

This brings us to the other way of looking at the effect of Andersen’s injury. That it signals a return to a previous way of doing things.

For several years, the Leafs had become a pro-active operation. Beyond the obvious, you didn’t see most of their moves coming. At the very least, they got ahead of the story.

When it came time to pick a new general manager, they picked the least safe of three options. When they got put up against the negotiating wall by the first of their young stars, they went to war with him. When the best free agent in ages became available, they channelled all their credibility into getting him.

Some of these decisions worked and some didn’t. But you had to credit the Leafs with vision. They were dictating the play off the ice, if not on it.

That’s no longer the case.

After a bad start to the season, the Leafs pulled the chute on their coach and then pushed him out of the plane.

Okay, firing Babcock is one decision, and a couple of well-placed, postfacto PR shivs made it look like a decision they had to make. But it was still a new look for this management group – as a reactive bunch. They’d caved to external pressure.

Their manner of dealing with Andersen’s injury is example No. 2.

Leafs GM Kyle Dubas has been waffling on backups since around the time he took over the job. Don’t ever go to the Cheesecake Factory with this guy. It’ll be three hours before he can decide on an appetizer.

Just a few days ago, Keefe was saying he had “real confidence” in Hutchinson. You know, right up until Hutchinson had one bad game in New York. That must have been some rock-solid confidence.

But the couple of million reserve GMs the Leafs have scattered throughout the country voiced their opinion in stronger terms than before. This worked with Babcock and it worked again.

A few hours later, Campbell and Kyle Clifford – the sort of roughneck the Leafs have very specifically not been hiring of late – were on a plane.

Was this the right decision? Maybe. Call back in two months for an answer.

Was this a decision made on their own terms? Absolutely not. It was made on everyone else’s timeline.

It’s not yet flailing, but the Leafs’ organizational movements are starting to become herky-jerky.

You can see where this leads.

What happens if they don’t make the playoffs? Or if they lose a first-round series? Or get crushed in the second?

Then the pressure to change – any sort of change – increases. It will do so exponentially until they succeed.

So welcome to the new story, same as the old one. The age of hockey reason is over in Toronto. Until further notice, we’re back to the times of chaos. 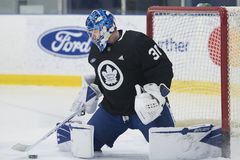