Alex Ovechkin arrived in Washington in the summer of 2005 wearing mismatched flip flops and Daisy Duke shorts. He looked like a lost tourist.

Ovechkin went No. 1 in the draft and was touted as a can’t-miss prospect, but Capitals teammates wondered aloud if this guy really was supposed to be the new face of the franchise, much less an elite player.

A decade and a half later, Ovechkin is the grinning, gap-toothed face of NHL goal-scoring, much to the continued bewilderment of his opponents.

The big Russian left winger is on the verge of becoming just the eighth player to score 700 career goals thanks to a once-in-a-generation combination of physicality, power and a unique shot that has made him nearly impossible to stop.

“He just can score from anywhere,” Calgary defenceman Mark Giordano said. “You sort of think teams would come up with a game plan to stop him, but you can’t.”

No game plan has worked. Like the cutter flustered batters knew was coming from New York Yankees closer Mariano Rivera, Ovechkin comes at goaltenders and defencemen with the same relentless, masterful approach – and the numbers keep climbing.

Ovechkin has never scored fewer than 32 goals in a season, and his 11 seasons of 40 or more trails only Wayne Gretzky for the most in league history. He has averaged 0.5 goal every playoff game, 10th-best all time, and contributed to winning the Stanley Cup and post-season MVP honours in 2018.

A dozen goaltenders and defenders who have tried to contain Ovechkin described the task to The Associated Press as his milestone approached.

“Whatever small inch you give him, he’s going to find a way to throw it through your legs from the blue line top cheese and you’re like, ‘What the heck just happened?“’ said Colorado forward Pierre-Edouard Bellemare, who faced Ovechkin in the 2018 final with Vegas. “Maybe you’re thinking your goalie should have it and you look at the replay like, ‘OK, that was a heck of a shot.’ ... It’s just that at any time in a game he can have an off night and out of nowhere, boom, he can have a hat trick.”

Bellemare made that observation just days before Ovechkin had no shots with six minutes left against Los Angeles. He then scored once to tie it, a second time to give Washington the lead and a third into an empty net to seal another win.

Ovechkin’s job from day one has been to shoot the puck as much as possible. He has an NHL-best 5,483 shots since 2005-06. No other player has 4,000. Ovechkin’s stick – an open blade with a big curve at the toe – and how he releases a shot also puts him in a class of his own.

“His puck flies not straight,” said Tampa Bay Lightning goalie Andrei Vasilevskiy, who has allowed nine goals to Ovechkin. “It’s kind of changing direction every time, so it’s pretty hard to stop for a goalie. It’s like knuckleball.”

A knucklepuck with a six-foot-three, 235-pound linebacker’s strength behind it. It’s not just Ovechkin’s release, but how the puck feels when it gets on net.

“His shot is absolutely a rocket or missile,” said Toronto Maple Leafs goalie Frederik Andersen, who has given up six of Ovechkin’s goals. “He shoots from anywhere and he shoots it hard and heavy.”

Ovechkin has made a living – roughly US$113-million so far with another contract expected to start in 2021-22 – by not only making goalies but the league’s best defensive defencemen miss. Norris Trophy winner Drew Doughty believes the only way to slow Ovechkin down is to get in his face in the neutral zone before he can pick up steam.

Problem is, even at 34 and past the prime of most scorers, Ovechkin still has the lower-body strength and foot speed to glide around opponents like they’re pylons.

“He still has that ability from when he was younger to beat you one-on-one, so you can’t just play the shot or you can’t just back off,” said Avalanche defenceman Ian Cole, who battled Ovechkin for years as a member of the Pittsburgh Penguins. “You’re in a bit of a quagmire when you’re playing against him just because there’s so many ways that he can beat you and he is so good, he’s so good at cutting to the middle, too, on his off side and letting these pucks go through traffic.”

There is no safe area when it comes to defending Ovechkin.

“He can make moves and shoot from anywhere and it can go in,” Kings forward Trevor Lewis said. “Most guys, if you keep them to the outside and they’re shooting, they’re not going to bury it every time. But it seems like every shot he takes, it’s got a chance to go in.”

Connor Hellebuyck vividly remembers his first encounter with Ovechkin as a rookie. The Winnipeg goaltender felt like the scene played out in slow motion before the puck barely stayed out, but he allowed two goals to Ovechkin in a game a couple of years later.

“He came down and ripped what looked like a little snap shot from the top of the circle,” Hellebuyck recalled. “It came off so heavy and I got such a good beat on it, but I was able to watch it completely pass me and I missed it.”

It’s the elephant in the room. Everyone knows, at some point, Ovechkin will rifle a blazing one-timer from the left faceoff circle on the power play. It is telegraphed almost every time, and yet it has proven to be one of the most potent shots in the history of the sport.

“It’s sometimes hard to get it by a shot-blocker but sometimes it’s easy,” Doughty said. “And he’s going to be able to get it by one way or the other. You just have to be on the same page as your goalie to be able to make the save or make the block. We all know it’s coming, but that shot’s so good.”

Ovechkin on the power play is such an institution that teammates told Bellemare when he entered the league not to try to chase him on the penalty kill and look like a fool. Bellemare is in awe of how much opponents can focus on him and still end up watching him celebrate another goal.

“We watch video, we study, but still, it keeps happening,” he said. “This is what it is. Everybody’s trying to play their best game when we meet that guy, and still he finds a way to go through you. This is what is unbelievable.”

Ovechkin last season became the oldest player to lead the NHL in goals since Phil Esposito in 1974-75. He refuses to reflect on his accomplishments until he hangs up his skates.

“I’m still playing,” Ovechkin said. “After career, yeah, I’m pretty sure me and my family and my friends are gonna talk about it. But now, we, and me personally, I’m gonna try to concentrate about just go out there and do my job.” 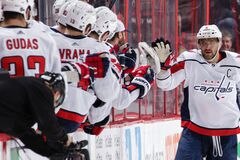 ‘Kobe meant so much to me’: The world reacts to Kobe Bryant’s tragic death
January 28, 2020 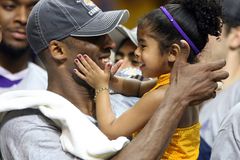 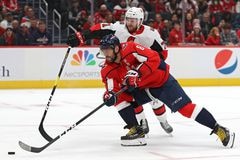