Maxim Cajkovic didn’t know a thing about the Quebec Major Junior Hockey League when he left Europe for the 2018-19 season, never mind how the world junior championship is embraced in Canada.

The annual tournament isn’t viewed quite the same back home in Slovakia.

“I hear people in Canada watch it more than the actual men’s championship,” said Cajkovic, a Saint John Sea Dogs forward from Bratislava.

“I talked to my billet family and they told me they watch it every year, every game. And I see all the commercials here so I guess it’s really, really big.”

Canada has invited 29 Canadian Hockey League skaters to selection camp next week, but it isn’t the only country with CHL players at the event.

The 17-year-old Cajkovic is one of many CHL import players who will be leaving his team and heading to camp in an effort to crack his national team’s roster for the tournament that begins Boxing Day in Vancouver and Victoria.

Kazakhstan is the only country among the 10 participating teams that won’t have a CHL player.

“It would mean almost everything to me,” said Cajkovic, who went No. 1 to Saint John in the 2018 CHL Import Draft. “I watched world juniors [for the] last five years and it’s pretty much my dream to go there.”

The Ontario Hockey League’s Sudbury Wolves will be losing a big part of their early-season success with Finnish goaltender Ukko-Pekka Luukkonen heading to the tournament for the second year in a row.

He was Finland’s starter in the 2018 edition in Buffalo and is looking for some redemption after his country was bounced in the quarter-finals by the Czech Republic and placed sixth.

“Last year was a hard year for us but there’s a lot of things to learn from,” said the 19-year-old, who was taken No. 3 in the CHL import draft. “There’s no easy team in the tournament. You have to be ready for everyone.”

Luukkonen plans to have his parents and girlfriend make the flight over from Finland for the tournament, which is a big deal back home.

“A couple real good years and hosting in Finland, it’s a big thing,” Luukkonen said. “Of course it’s hard for a lot to watch the games when we are in Vancouver but as hockey it’s a big thing.”

Cajkovic has never played for Slovakia’s under-20 squad but was dominant at the past U18s, where he finished second in tournament scoring behind American and top NHL prospect Jack Hughes, who’s expected to be one of the stars at the world juniors.

Cajkovic, a 5-foot-11, 179-pound right-handed winger, has had a long road to the CHL, and is closing in on fulfilling his dream of playing in the world juniors after years of travelling around the world looking for the best competition.

He moved away from home with his mom when he was 12 to the Czech Republic to pursue hockey at a higher level, and went on to play two years in Sweden prior to joining the Sea Dogs. He has spent the majority of his young career playing with players much older than him.

“Hockey [is] pretty much everything for me,” Cajkovic said. “It was the only thing I ever played competitively. Started at five, playing with the under-11 guys when I was five.

“I always played with older kids, only season with my age group was the first year in Sweden.”

Players such as Luukkonen have used the international spotlight in the past to gain the attention of NHL teams, leading to the Finnish netminder being taken 54th over all by the Buffalo Sabres in 2017.

Cajkovic is hoping to do something similar in 2019.

“You see the rankings and people talking about it ... it’s pretty tough for my head to think about all that stuff. I try to stop and just focus on what I do with Saint John,” Cajkovic said.

“A lot of pressure, most pressure I’ve ever had on me. It’s unbelievable how much pressure there is.”

The main reason he came to the CHL was because he was told it would help his chances of making it to the NHL.

“I didn’t know much, just that it was the junior NHL, best junior league in the world and I would compete with the best players for this age. That was pretty much it. I didn’t know any teams,” Cajkovic said.

Just like Canada, which finds an extra gear when it plays the rival Americans, Cajkovic says that representing Slovakia is always extra special when he lines up across from the Czech Republic.

“Czechs are really good and they think they are better than us and not nice to us, so we just want to beat them,” Cajkovic said. “Basically a rivalry. I don’t think we have anyone else like that.”

Slovakia opens its tournament Dec. 26 against the United States in Victoria, where all Group B games are being held. Canada starts against Denmark in Vancouver, the site of all Group A games. 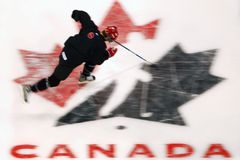 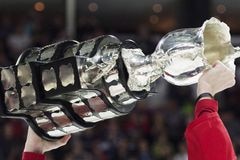