Ryan Graves had a goal and two assists, Philipp Grubauer made 31 saves, and the Colorado Avalanche used a three-goal second period to beat the St. Louis Blues 5-1 on Friday night and take a 3-0 series lead in their first-round West Division matchup.

Alex Newhook scored his first NHL goal, and Tyson Jost, Brandon Saad and J.T. Compher also scored for the Avalanche, who can complete a series sweep Sunday in Game 4 in St. Louis.

“I think we’re a little opportunistic tonight,” Avalanche coach Jared Bednar said. “We had some good opportunities to score some goals, we didn’t execute that well at times and same thing with our breakouts and in the neutral zone.”

Tyler Bozak scored for the Blues, and Jordan Binnington made 21 saves.

Graves broke a scoreless tie at 1:57 of the second period. Graves, who had just gotten out of the penalty box, beat Binnington in a race for a loose puck in left circle and chipped it in the empty net.

“I don’t know how it squeaked out, but it kind of squeaked out in a really good spot for me and fortunately it was the second period, so I had to jump on their guy,” Graves said.

Newhook made it 2-0, burying a rebound off a slap shot by Graves with 7:23 left in the second.

Colorado added to its lead with 3:52 left in the second on a diving swipe of the puck by Jost, finishing off a rush moments after Grubauer got in front of a point-blank chance for Jordan Kyrou.

The Blues unsuccessfully challenged for goaltender interference – giving the Avalanche a power play. But Bozak scored a short-handed goal just nine seconds into the penalty kill to cut the Colorado lead to 3-1.

Blues coach Craig Berube was not pleased with the officiating.

“In every game, we get one or two calls,” Berube said. “It’s usually late in the third period. They’re getting four a game or five, how many did they get tonight? Five? It’s not that lopsided. I’m not sure why we don’t get the calls we deserve. (Colton) Parayko gets tripped in the corner, slew-footed, and they don’t call it, OK? And it cost us a goal.

Grubauer was stellar from the start, making 25 saves in the first two periods and several more in the third period as a desperate Blues team tried to come back.

“You just don’t even notice that he’s been so good in there, he just makes saves so effortless,” Graves said. “So, time and time again, he bails us out when we make mistakes.”

Saad’s second goal of the playoffs with 6:18 left in the third sealed the win for the Avalanche. Compher added an empty-net goal.

Avalanche C Nazem Kadri was suspended eight games for his check to the head of Blues D Justin Faulk in the third period of Game 2.

This is the sixth time Kadri has been suspended in his 12-year career, the most recent being a five-game suspension in the 2019 playoffs as a member of the Toronto Maple Leafs for a hit on Boston Bruins F Jake Debrusk.

Kadri was given a match penalty for the hit on Faulk, who didn’t return and was scratched with an upper-body injury on Friday.

“I’m a little surprised, to be honest with you,” Bednar said of the length of the suspension. “I looked through all the head shot suspensions for the last year, a lot of two-gamers getting handed out for significant hits to the head. We’ve had some guys put out with hits to the head that are still out with no suspension. So, I thought, generally the rule of thumb is playoffs you get a little less, and he got significantly worse.”

Along with Faulk, the Blues lost Robert Bortuzzo (upper body) after a hit from Jost, leaving St. Louis with just four defencemen to finish Game 2.

With Faulk and Bortuzzo out for Game 3, St. Louis was forced to play Steven Santini and Mitch Reinke. Santini played in just three regular-season games and Reinke played his lone NHL game in 2018.

The Blues allowed 9,000 fans, nearly 50 per cent capacity, for the game. It was the largest percentage increase since St. Louis began its home schedule on Jan. 18.

Duchene scores in second overtime as Predators hold off Hurricanes
Subscriber content
May 22, 2021 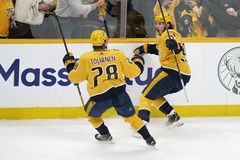 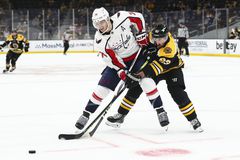 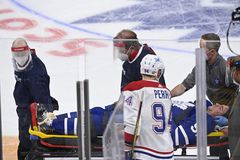