The NHL has banned its employees from business travel outside North America in response to the widening new coronavirus outbreak.

And if an individual ends up in a location affected by COVID-19 on their own, the league is mandating a two-week quarantine before that person can return to work.

Speaking at the conclusion of the NHL general managers meetings on Wednesday, commissioner Gary Bettman said the NHL is “aware of and focused on all possibilities” as it continues to monitor the fast-moving situation.

“If [league employees] go to a place that’s on the list of countries that have an issue, or while you’re there, that country comes on the list and then when you come back, we want you quarantined, out of the office for two weeks until we can see if symptoms develop,” Bettman said.

He added it’s currently up to individual teams to decide on their own travel protocols.

“The clubs know that’s what we’re doing,” Bettman said. “They’ve been advised. They’re free to adopt as much or little of that policy, at least for the time being, as possible.”

Bettman added the NHL has been in communication with both the Centers for Disease Control and Prevention (CDC) in the United States and Health Canada, and in regular contact with all 31 of its franchises.

The commissioner described the situation as “day-to-day” as the virus continues to spread around the world, but declined to speculate about the potential of having to hold games in empty arenas or postponing the playoffs.

“At this point, it would be premature to pick any one of the possibilities, especially because it may or may not become necessary in North America,” Bettman said at the swanky Boca Beach Club on Florida’s Atlantic coast. “We’re staying current, we’re staying in communication with everyone appropriate, and we’ll deal with it if and when the time comes.”

The NBA has told its players to stop giving high-fives to basketball fans and strangers, and avoid taking items for autographs, but Bettman said the NHL hasn’t issued a similar directive.

Switzerland’s top hockey league postponed its playoffs until the middle of March, while a number of sporting events around the globe have been cancelled as countries struggle to contain the outbreak.

“We’re aware of what’s happening in other places in the world and we understand that things may evolve or change,” Bettman said. “We also understand that we’re going to have to react to it in a professional and timely and sensible basis.

“But I don’t think as we sit here today, people should get too far ahead of themselves.”

Calgary Flames general manager Brad Treliving said coronavirus was discussed at length during the annual meetings, adding that his team has made some alterations to travel plans for its European scouts.

“You’ve got to take the leadership for your staff and make sure you’re not putting them in tough situations,” Treliving said. “But for right now it’s business as usual until you find out otherwise.”

As of Wednesday, there had been more than 94,000 confirmed cases of people contracting the virus around the world, including more than 3,200 deaths.

Canada currently has reported 33 cases, while Washington State has a total of nine deaths.

NHL deputy commissioner Bill Daly said the CDC and Health Canada don’t generally mandate or dictate what course of action needs to be taken in situations such as the coronavirus outbreak.

SALARY CAP SET TO RISE AT LEAST US$2.5 MILLION

The league announced next season’s salary cap will fall somewhere between US$84-million and $88.2-million, but the final number still needs to be negotiated with the NHL Players’ Association. The cap is set at US$81.5-million for the 2019-20 campaign, a bump of US$2-million compared with 2018-19.

Like the rest of the hockey world, Bettman watched with interest when the Carolina Hurricanes were forced to use emergency backup goalie David Ayres in a game last month after both their netminders were lost to injury. A 42-year-old Zamboni driver, Ayres rocketed to fame after a stunning 6-3 victory over the Toronto Maple Leafs that saw him make eight saves. “‘Gee, this doesn’t happen very often,’" Bettman said of his initial reaction to Ayres entering the game in the second period. “It was intriguing to say the least, especially after he let in the first few shots. What was, to me, more remarkable was how he settled down and how Carolina played the third. They upped their game to really protect the situation.” GMs decided this week against altering the emergency-backup-goalie protocol, agreeing that the system, which has only been used twice since the 1966-67 season, worked as its intended.

Nazem Kadri got himself suspended for eight of Toronto’s 14 playoff games the past two seasons, but Colorado GM Joe Sakic isn’t worried about a repeat this spring after the Avalanche acquired the gritty centre from the Maple Leafs in July. “He’s been huge,” Sakic said. “You can play him against anybody. He’s got a tremendous amount of skill, he brings that grit. Just a super guy in the dressing room.” Sakic added of Kadri’s suspension history: “He’s an emotional guy. That’s kind of what sets him apart, too. You don’t want to take too much of that away. Obviously, you don’t want him crossing that line, but we don’t anticipate that. We know that he’s going to play hard. He’s going to provide a lot of what we don’t have.”

San Jose GM Doug Wilson said it would have been nice to find a landing spot for veteran centre Joe Thornton at the trade deadline. The Sharks shipped winger Patrick Marleau to the Pittsburgh Penguins, but couldn’t swing a deal for their other 40-year-old. “These guys are really quality, talented people,” Wilson said. “I left it up to both of those people to explore those opportunities. It came to fruition with Patty. But it didn’t come to fruition with [Thornton].”

Leafs GM Kyle Dubas has been impressed by Nick Robertson’s 2019-20 goal deluge. The 53rd pick by Toronto in last June’s draft recorded a hat trick Sunday to bring the winger’s total to 50 on the campaign for the Ontario Hockey League’s Peterborough Petes. “He’s had a great season,” Dubas said. “With his work ethic, he’s only going to continue to push himself to get better.” 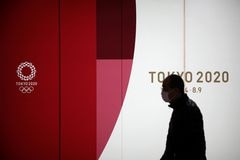 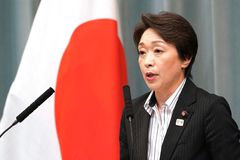 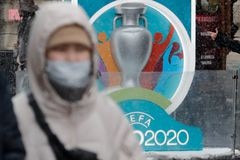