Brendan Gallagher had a goal and an assist in Montreal’s three-goal first period, and the Canadiens went on to a 6-2 win over the New York Islanders on Tuesday night.

Joel Armia also had a goal and an assist, and Jeff Petry, Charles Hudon, Paul Byron and Jordan Weal also scored for the Canadiens, and Phillip Danault had two assists. Carey Price stopped 20 shots to improve to 14-6-4 against the Islanders.

“We were pretty solid in all areas,” Canadiens coach Claude Julien said. “We scored goals by going to the net, we created some traffic there. We played well defensively. We didn’t give them much.”

Montreal improved to 4-1-1 in its last six games and pulled seven points behind the Islanders and Columbus Blue Jackets, who hold the wild-card spots in the Eastern Conference, with Carolina, the Rangers and Florida also in between.

“We still have minimal chances for the playoffs,” Montreal’s Artturi Lehkonen said. “We have to take it game by game.”

Brock Nelson and Ryan Pulock scored for the Islanders, who have lost four straight and eight of their last 10 games (2-6-2). Thomas Greiss gave up three goals on 12 shots in the first period. Semyon Varlamov replaced him to start the second and finished with 12 saves.

Trailing 4-0, Anders Lee appeared to get the Islanders on the scoreboard 17 seconds into the third as Andy Greene sent the puck at the net from the left side and it deflected off Lee’s skate and in. However, the officials reviewed the play and disallowed the goal, ruling Lee made a distinct kicking motion.

Josh Bailey then stole the puck from Price behind the net, and passed in front to Nelson, who put it into the open goal for his 24th at 6:14. It ended a scoreless drought of 153:03 for the Islanders, who last scored in the first period at St. Louis on Thursday before being shut out at home against Boston on Saturday.

Islanders defenceman Johnny Boychuk was cut when he was hit in the face by Lehkonen’s skate as the Canadiens’ left wing fell forward. Boychuk was down on the ice briefly before he got up and skated off the ice with his hand covering his face.

New York coach Barry Trotz didn’t have an update on Boychuk after the game.

“I think he’ll be OK, but it doesn’t matter, it’s a scary situation,” Lee said. “You hate to see that happen. It happens quick, skate in the face. We’ll check on him here, that’s where our minds are right now, that’s for sure.”

Weal pushed the Canadiens’ lead to 5-1 with his eighth with 4 1/2 minutes left, and Pulock pulled the Islanders back within three on a power-play goal less than a minute later.

Armia then sealed the win with an empty-netter with 2:50 to go,

With the Islanders on their first power play of the game, Devon Toews turned over the puck in the defensive zone. Armia got the puck and passed to the middle to Byron, who beat Varlamov for his fourth with 7:25 left in the second to make it 4-0.

New York was unable to muster anything on its second power play later in the second, and heard boos from the home crowd in the closing minutes of the period.

“I don’t think they had much to cheer for,” Lee said. “We didn’t give them anything. I wouldn’t be cheering either.”

Montreal took the lead with three goals in a 5:03 span late in the first period.

Gallagher got the Canadiens on the scoreboard as he deflected a shot by Ben Chiarot from the left circle up over Greiss’ shoulder for his 22nd with 6:29 to go.

Petry doubled Montreal’s lead 2:12 later as he beat Greiss with shot fro above the left circle. It was Petry’s 11th of the season and gave him one in two straight games.

Hudon made it 3-0 when he got the puck near the middle of the blue line, skated up to the left and fired a shot off the left post and in with 1:26 left in the opening period. Hudon, playing in his 12th game of the season, got his first goal since Nov. 10, 2018, against Vegas.

NOTES: Lee’s wife, Grace, gave birth to their first child on Monday, a daughter named Ruby. … The Islanders, splitting home games between two arenas for the second straight season, lost in regulation at Barclays Center for the first time this season – falling to 7-1-3 in Brooklyn. There are two more games scheduled at Barclays Center – March 17 against Calgary and March 22 against Carolina. The remainder of the games this season, including the playoffs, and all games next season will be at Nassau Coliseum as the team prepares to move into a new arena under construction at Belmont Park for the 2021-22 season. … The Canadiens won the first meeting 4-2 at home on Dec 3. The teams conclude the season series March 28 at Montreal. … The Canadiens lost Tomas Tatar, who leads the team with 22 goals and 39 assists, to a lower-body injury in the first period. … Hudon ended a 29-game goal-scoring drought. He had three goals in 32 games last season – none in the last 19 games.

Islanders: At Ottawa on Thursday night. 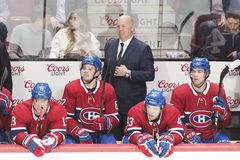