Sharks defenceman Brent Burns was honoured in a pregame ceremony for skating in his 1,000th career game two weeks earlier.

After being led on to the ice through a giant Sharks head by his son Jagger, he received several gifts, including a fossilized megalodon tooth and two gemsbok antelope for his ranch in Texas.

“I can’t say enough about the whole Sharks organization, and (GM) Doug (Wilson), what they did for my family,” Burns said. “Letting Jags come out of the Sharks head, that’s one of the best moments of my life and his life. To share that, it’s just — everything they do is first class and really special.”

San Jose fans should be very happy considering the Sharks have also won five straight at home and are riding an 8-1-0 streak in their last nine contests.

San Jose goalie Martin Jones, who has allowed two or fewer goals in four straight starts, made 27 saves. Joe Pavelski, Joe Thornton and Melker Karlsson also scored for the Sharks, who own the second-best home record this season at 16-4-4

“It was a tough scheduled game for us, I think five in eight nights and (after) an emotional game in Vegas,” San Jose coach Peter DeBoer said. “They played hard, they played with a lot of structure. They make it hard to get through the neutral zone. So, this was a game we had to really gut it out a little bit. And I thought we found a way.”

It was also an emotional night for Sharks defenceman Erik Karlsson, as he faced the Senators for the second time this season after being traded from Ottawa just before training camp opened in September.

“It’s still weird, it’s probably gonna be weird for as long as I play somewhere else, but that’s the way it is,” Karlsson said. “The boys in here were tired today and we did what we had to do to get away with a ‘W’ and that’s what it’s all about. It wasn’t a pretty game and at the end of the day the two points were huge for us.”

With the win, the Sharks remained one point back of first-place Calgary in the Pacific Division, and a point ahead of Vegas, which beat Chicago 4-3 earlier in the night. San Jose defeated the Golden Knights in Vegas on Thursday.

Since the start of December, the Sharks have scored 87 goals, second only behind Tampa Bay, which has scored 88.

Leading 1-0 from Pavelski’s second-period goal — his team-leading 26th on the season — Burns made it 2-0 at 6:17 of the third when he sent a wrist shot to the net that went off Ottawa’s Christian Jaros and past Ottawa goaltender Anders Nilsson, who stopped 28 shots.

Thornton pushed the lead back to two goals with 4:17 left in the game, when he redirected a shot that started at the top from Burns and bounced off Timo Meier.

“We gave ourselves a chance as long as we could,” said Ottawa coach Guy Boucher, whose Senators dropped to 6-15-1 on the road this season. “The Sharks are the team of the hour and they are stacked. To be able to hang in there with them was a positive for us. We got enough looks and opportunities, but I think we could have done more in front of their goaltender to deserve what they got.” 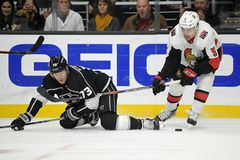 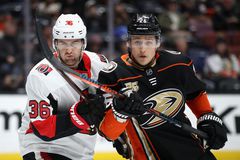 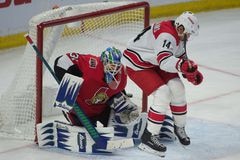