With designs on improving special teams while also bringing in some immediate injury relief, the Calgary Flames made two depth additions on the blueline at Monday’s NHL trade deadline.

General manager Brad Treliving added two 27-year-old, left-shooting pending unrestricted free agents in Erik Gustafsson from Chicago, who was acquired for a third-round pick in 2020, and Derek Forbort from the Los Angeles Kings, who cost a conditional fourth-round pick in 2021.

“What we tried to do is put it on this group and say, ‘where are the areas where we can help?“’ Treliving said. “Special-team units is an area that we can help improve ourselves from the blueline, but also eat away some minutes of some people who we may be overworking.”

Gustafsson, who had 60 points last season while logging more than 22 minutes per game in ice time, will see time on Calgary’s 18th-ranked power play, which is without injured captain Mark Giordano (hamstring) at the moment.

“His strength is power play, puck moving,” Treliving said. “That’s his bread and butter. He’s a puck mover. He has a lot of puck poise. Even when (Giordano) gets back in, is there a way to lessen his workload?”

Forbort, six-foot-four and 220 pounds, spent almost all of his five seasons in Los Angeles paired with Drew Doughty and will help on the penalty kill, where Travis Hamonic (upper body) has been missed.

“He’s a big body. He takes up a lot of space. He’s hard around the net,” Treliving said.

While Giordano is back practising with the team and is nearing a return, Hamonic remains out week-to-week, with Treliving acknowledging his injury is longer term.

The injuries had forced Calgary to elevate players into bigger roles and call up players from the minors. Last game, Michael Stone was on the second pairing. He was a healthy scratch most of the first half of the season. The third pairing was second-year player Oliver Kylington, 22, and rookie Alexander Yelesin in just his fourth NHL game.

Treliving said he had been looking to add in this area, but the prices were expensive.

After a terrific season a year ago in which Calgary was runner-up to the Tampa Bay Lightning for the Presidents’ Trophy, this season has been a disappointment with the team on the bubble for a playoff spot in the Western Conference.

As of Monday morning after defeating Detroit on Sunday, Calgary was in the No. 1 wild card spot. But as a sign of how close the race is, 24 hours earlier, the Flames were fourth in the wild-card race and on the outside of a playoff spot.

“Now we’ve got the challenge ahead of us of pushing for the next 19 games,” said Treliving. “When we play to our capability, we’re a very good team. So we tried to shore up our blueline and also not subtract. This wasn’t a day in my mind where we were going to go out and take anything away.”

While there wasn’t a blockbuster trade made by the Flames, there was a lot of commotion early in the day in Boston when Johnny Gaudreau mysteriously exited the ice late in practice. But it turned out to be a false alarm for everyone, except for Gaudreau, who afterwards chuckled with reporters about the attention his absence got, while pointing out, “I had to pee.” 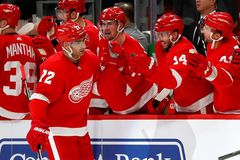