Geoff Ward made his NHL head coaching debut, finished his first season and will start his second all in unusual circumstances.

The 58-year-old from Waterloo, Ont., got the go-ahead to continue coaching the Calgary Flames with a multi-year contract and the removal of the “interim” tag from his title Monday.

Ward is the franchise’s 20th head coach, Calgary’s seventh in the last 15 years and the third general manager Brad Treliving has hired in the last four.

Ward was promoted from associate coach Nov. 29. Bill Peters resigned amid allegations by a former player that Peters directed racist comments at him in the minor leagues a decade earlier.

Calgary ranked third in the Pacific Division and eighth in the Western Conference on March 12 when the NHL halted the season because of the advancing COVID-19 pandemic.

In the NHL’s restart in August, the Flames downed the Winnipeg Jets 3-1 in a best-of-five qualifying series to advance.

The Dallas Stars bounced the Flames from the first round of playoffs in six games. Calgary imploded in Game 6, allowing seven straight goals after leading 3-0.

Within days of Calgary announcing Peters as head coach in April 2018, the Flames brought Ward on board as his associate coach.

“Having the opportunity to work with the guys over the last couple years has been a big thing for me, in order to feel like it was the right step for me to stay here,” Ward said Monday on a media conference call.

“We’ve done an awful lot of good work over the last few years. We’ve made the playoffs two years in a row. I really like the group. It’s an extremely tight team.”

The NHL plans to open Dec. 4 following November training camps, but the virus may force the league to make further modifications.

“There’s going to be an awful lot of things that we may have to think about,” Ward said. "That’s a real neat challenge with the coaching now.

“Even for the preparation of our players, we have to be willing to think outside the box potentially and try to take advantage of situations that come up that are new.”

“Geoff’s not the coach here because it’s the path of least resistance, or just because he was here,” Treliving said.

“We’ve gone through some unforeseen circumstances which has led us to having to change coaches. I take responsibility. When I first came here, the object wasn’t to change coaches on a regular basis.”

“The fact Geoff has been here, been with our group and it provides us with some continuity and stability, I think is very important, but first and foremost we wanted to make sure we had the right fit here.”

Ward won a Stanley Cup as an assistant coach with the Boston Bruins in 2011. He held the same position with the New Jersey Devils from 2015 to 2018.

The Flames found their scoring touch after the coaching change jumping from 20th to 10th in the league in average goals per game. The increase was due in large part to a more productive power play.

Calgary’s seven straight wins when Ward stepped behind the bench was the team’s longest streak of the season.

“With the coaching change, I thought Geoff and his staff did a real good job through a difficult circumstance, and then getting through that and just really stabilizing our team through the course of the rest of the regular season, into what was an unforeseen and elongated pause, and then into the playoffs,” Treliving said.

“You’re aware of what’s out there in terms of the coaching landscape. I felt Geoff was the absolute best person to carry us forward.”

Ward’s decision to pull starter Cam Talbot in Game 6 versus Dallas with the score tied 3-3 raised eyebrows, however.

Enter David Rittich, who hadn’t played a game in six months due to the pandemic hiatus. He gave up three goals on nine shots in the second period.

The coach said later he intended to put Talbot back in net before the end of the second period, after a quick discussion and time for the goalie to reset, but Talbot had disappeared down the tunnel to the dressing room.

Neither Treliving nor Ward would confirm reports the latter has agreed to a two-year contract.

“I think the length is good,” Ward said. “I think it’s going to allow us to continue to move along the path that we’ve started and that’s exciting.” 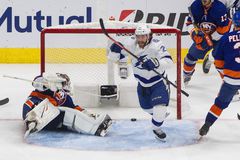 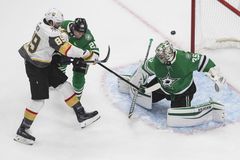 NHL’s final four have got deeper with plenty of newcomers
Subscriber content
September 10, 2020 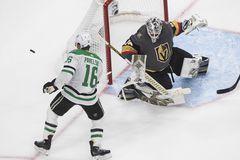