It took a long time for the Calgary Flames to get over their quick exit from last spring’s Stanley Cup playoffs. After winning 50 games during the regular season, they got steamrolled by the Colorado Avalanche. Their postseason run was over in a week.

“The fact that the playoff defeat happened so quickly took the wind out of our sails all summer,” Brad Treliving, Calgary’s general manager, said this week. “Like anything else in life, when you have expectations and don’t meet them, it hurts.”

It hurt so much that it carried over into this season. At one point, the Flames lost six in a row, the most recent a 5-0 pummelling by the St. Louis Blues. Players held a team meeting. Treliving met with them, too.

“I think there were a lot of things at play, but being unable to get over what happened to us in the playoffs may have been one of them,“ Treliving said. “We came back with a chip on our shoulder."

The meeting seemed to work. Calgary won its next game, in Philadelphia, and then played well in an overtime loss at Pittsburgh.

“We felt we were in a good place,” the general manager said. “And then, in the snap of the fingers, we were pitched into chaos.”

On Nov. 25, an accusation of racism was made against Flames coach Bill Peters by a player he once coached in the AHL. The following day, another came forward and said he had been kicked by Peters when he was with the Carolina Hurricanes.

As the team investigated the complaints, Peters resigned.

“It was just so surprising," Treliving said. “A really difficult week.”

Treliving appointed Geoff Ward interim head coach. Ward, who had served as associate coach to Peters, was long on experience but had never been a head coach in the NHL.

The Flames’ first game without Peters behind the bench was against the Sabres on Nov. 27.

“I thought there was every reason in the book for us to go into Buffalo and not play well, but we won,“ Treliving said. “It was a sign that our group was finding a way to park all the stuff that was going on around us. I give a lot of credit to our players.

“What it amounted to is that we went from a chaotic situation to a fresh start.”

On Thursday night, Calgary won its seventh game in a row since Ward became interim head coach. The Flames enter Saturday’s game against Carolina at the Scotiabank Saddledome with an 18-12-4 record. They are third in the Pacific Division but trail first-place Arizona by just two points.

“Our game was trending in a better direction and you are always hopeful, but we never could have expected this to happen,“ Treliving said. “Geoff has done a phenomenal job.”

Calgary has won despite trailing in each of its past three games. It scored three goals in less than three minutes in the third period on Thursday to break open a tight game with the Maple Leafs.

“It has been a little bit of a theme lately for our team,“ Ward said. “We have been pretty resilient for the last three games. We stayed composed tonight, and we stayed on task.”

The Flames have got outstanding goaltending from David Rittich and his backup, Cam Talbot, has won twice in the past week. Johnny Gaudreau, who had five goals in the first 29 games, scored twice in the third period against Toronto, and now has four in the past five games. Micheal Frolik had the game-winner. It was his third goal in as many games. He is a fourth-line forward.

“If you look around the league, every [top] team gets contributions from everybody,” Milan Lucic said. “There is a real belief that wherever you play or how much you play, we are a team that needs everybody.”

Lucic, who went 27 games without a goal to start the season, now has three over the past five games. “Guys are starting to get excited about what we are building here,” he said.

Much of the credit should be given to Ward, who took over at a difficult time and has had nothing but success.

“I am starting to get my head above water,” he said Thursday. The 57-year-old won a Stanley Cup as an assistant coach for the Boston Bruins. “The first few days were hectic because so much was going on. I am starting to be able to settle into a more normal routine.

“The thing I am proudest of is the way the guys have come together. They stick up for each other and play for one another. We’re really starting to see a nice synergy now.“

When he took over, Ward met privately with each player, and then met with the team as a whole. He explained his philosophy, but also left the door open to suggestions. That helped in terms of team-building and it won his players over.

“Once he stepped in, it was a fresh start for everybody,” said Matthew Tkachuk, Calgary’s edgy winger.

Thirteen different players have scored for the Flames over their past nine games.

The organization had other recent good news. A week ago, its ownership group signed an agreement with the city to build a $550-million arena that should be open in time for the 2024-25 season. The Saddledome has served as the team’s home rink since 1983. It is the second-oldest arena in the NHL after Madison Square Garden, but the latter underwent a US$1-billion overhaul in 2013.

“We are elated and I would also say we are relieved to have found a pathway forward," said John Bean, the president and chief executive officer of the Calgary Sports and Entertainment Corporation.

The battle for a new arena had gone on for 14 years, led mostly by Ken King, the club’s president. As recently as the past few years, Calgary residents voted in opposition to building one and negotiations broke off.

King, who has stepped away to attend to a health issue, came to the boardroom to sign documents for the new building on Dec. 5.

“It was an emotional, magical moment,” Bean said. “He is a quality guy. It takes a lot of intestinal fortitude to go through what he has for 14 years.”

On the ice, things could not be better. It has been a topsy-turvy season, but Calgary seems to have got its mojo back.

“You can see the confidence building again,” said Mark Giordano, the team captain.

Gaudreau led the comeback on Thursday night with his first two-goal game of the season. (He scored 36 last year.)

It finally looks as though the pain of last season’s collapse in the playoffs has abated.

“We did not get the start we wanted this season,“ Gaudreau said. “But now all of the guys are playing well and it shows in our results.”

He points to Ward as being the difference maker.

“He expects a lot out of us, but we like playing for him,” Gaudreau said. “For him to win seven games, having never being a head coach, is pretty impressive. We enjoy playing in front of him.“ 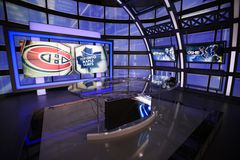 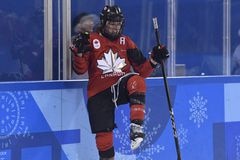