Calgary has struck a deal to pay for half the cost of building a new home for the Flames hockey team, a decision that comes as the city struggles to balance its budget in the midst of an economic downturn.

The announcement of a deal on Monday evening to build a $550-million arena followed years of often-contentious debate between the city and the team’s owners over who should pay for the new facility. The city has said it won’t raise taxes to pay for the arena but will be searching for every free penny it has to cover the bill.

In exchange for covering half the cost of the arena, the city will pocket a fee on every ticket sold. Municipal taxpayers will be on the hook for additional costs, including demolishing the existing Saddledome.

“This is a good deal for Calgary. For some years now, I’ve been saying that any investment of public money in this project must come with public benefit, this deal does that,” said Mayor Naheed Nenshi after the announcement. He said the building would benefit the public in part “by uniting people.”

Calgarians will have a week to voice their opinions on the deal before council votes next week on whether to move ahead with the plan.

Ken King, the head of the group that owns the Flames, said that the plan is a culmination of 14 months of talks. “I hope we all agree that we’ve struck a great balance, that we have aligned interest and we can do something really valuable for the city,” he said.

The proposed 19,000-seat arena could be built on a parking lot currently used during the summer months by the Calgary Stampede. Construction is not expected to start before 2021 at the site, which lies east of downtown.​

The new arena would be only a few hundred metres from the nearly 36-year-old Saddledome and would be near a neighbourhood of newly built condominium towers known as the East Village.

After years of stunted talks, Calgary may be ready to build a new hockey arena

Any plans to build a new arena come at a difficult time for Calgary, where officials are currently debating how to cut $60-million from spending due to a budget crunch. The fire service, police department and transit system are preparing for a coming announcement that they’ll lose millions each in annual funding.

“The optics of this stink. It’s really terrible timing,” Mr. Nenshi told reporters earlier on Monday about an arena deal.

The city is still struggling with one of the highest unemployment rates in Canada and a soaring number of office vacancies after an oil price crash that started in late 2014.

The once-humming centre of Canada’s energy industry also shot down public largesse for sports last November when 56 per cent of residents voted in a plebiscite to reject a $4-billion bid for the 2026 Winter Olympics.

Talks to replace the saddle-shaped arena, the third-oldest venue operating in the National Hockey League, have continued for years and have proceeded in fits and starts. City officials and the Calgary Flames’ owners have walked away from the negotiating table at various times, citing the cost of proposed projects and unproductive conversations.

During the most recent major round of talks, officials were looking at a 2015 proposal from the Flames to build an $890-million arena as well as a neighbouring football stadium for the CFL’s Calgary Stampeders – which is owned by the same group. The city balked at the cost of the project, especially after it was revealed that environmental remediation of the proposed site would cost hundreds of millions more.

The Edmonton Oilers, Calgary’s archrivals on the rink, opened their new arena in September, 2016. Edmonton’s Rogers Place cost nearly $604-million and the plan called for the arena to serve as the catalyst for new development on the north side of the capital’s downtown.

The Oilers’ owner put up nearly $24-million in cash for the arena and will cover a further $138-million in lease payments over the next 35 years. The remainder of the cost will be covered by new taxes, a ticket tax and municipal spending. The province and federal government also put up $7-million each.

Decades of economic research show that new sports venues don’t bring much benefit to their cities, said Lindsay Tedds, an assistant professor of economics at the University of Calgary. “These projects don’t bring any large, incremental economic boom. The analogy is that they bring about the same amount of new money as a mid-sized department store, so there is some, but the city won’t bounce back with a new arena,” she said.

After years of stunted talks, Calgary may be ready to build a new hockey arena
July 24, 2019 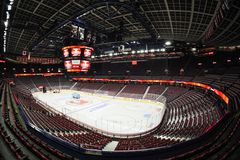 Calgary city council to once again discuss getting a new home for Flames
Subscriber content
January 25, 2019 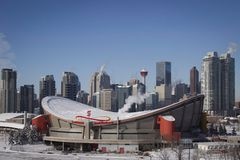 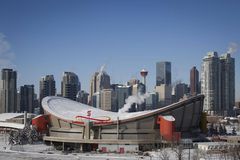