Kyle Turris had a goal and an assist as Canada finished off preliminary play at the world hockey championship with a 3-0 win over the United States on Tuesday.

Canada finished at the top of the Group A standings with 18 points from six regulation wins and one regulation loss. The Canadians have won six straight since opening with a 3-1 loss to Finland.

Pierre-Luc Dubois and Jared McCann also scored for Canada, while Matt Murray made 28 saves and picked up the shutout in goal.

Cory Schneider made 33 saves in taking the loss in goal for the Americans, who finished fourth in the group with 14 points (4-1-1) behind Canada, Finland and Germany.

Canada took charge early in the game, with Dubois scoring 1 minute 49 seconds after the opening faceoff. Mark Stone came out from behind the American goal and fed Dubois with a pass to set up the opening goal.

“We talked about getting a good start, and it doesn’t get much better than getting an early goal,” Dubois said. “We also talked about playing hard. Every line was playing well from the start of the game, and even after our first goal.”

Turris put Canada up 2-0 just more than seven minutes later when Anthony Mantha caused a turnover in the Canadian zone and skated up the wing before feeding Canada’s captain with a pass.

McCann put Canada up 3-0 15 minutes into the second period when he took a pass from Turris and ripped a shot past Schneider.

“We came out and got that early goal, and after that it eased our nerves a little bit and we continued to make strong plays with the puck,” Canada head coach Alain Vigneault said. "We took a lot of their transition game away and, over all, it was the type of game where everyone showed up and played hard.

“We got some key saves at the right times and we were able to get that third goal in the second period, which obviously helped us going in to the third.”

Canada will face Switzerland, which finished fourth in Group B, in the quarter-finals. The U.S., which had won five straight games, will face Russia, which clinched top spot in Group B with a 7-4 win over Sweden. NHL stars Alex Ovechkin and Evgeni Malkin scored for Russia.

“The game obviously didn’t go the way we wanted,” U.S. coach Jeff Blashill said. “You start the tournament trying to get yourself in the quarter-finals. We’ve done that and now you have to win three hockey games. We’ll put this behind us and move forward.”

Mantha, Canada’s leading scorer with 12 points (seven goals, five assists) in seven games, was assessed a two-minute penalty and a 10-minute misconduct for an elbow to the head of American forward Colin White midway through the second period.

Elsewhere, Leon Draisaitl scored tiebreaking and go-ahead goals late in the third period, lifting Germany to a 4-2 win over Finland.

Finland will face Sweden in the quarter-finals, while Germany will take on the Czech Republic.

The Czechs closed the preliminary round with a 5-4 win over Switzerland in Bratislava, getting one goal and two assists each from Jakub Voracek and Dominik Simon.

In matchups of teams that won’t advance, Latvia beat Norway 4-1 in Group B and host Slovakia outlasted Denmark 2-1 in a shootout decided by penalty shots. 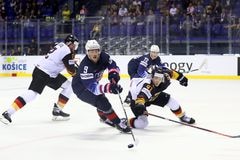 Canada improves to 3-1 with win over France at world hockey championship
May 16, 2019 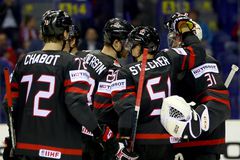 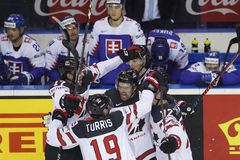