Akil Thomas was in the crowd two years ago when little-used Tyler Steenbergen scored the winning goal for Canada at the world juniors.

Having just turned 18, he made a declaration to his friends.

“I’m going to score that goal one day,” Thomas told them. “That’s going to be me — watch.”

The statement turned out to be eerily prescient.

And Canada couldn’t be happier.

Thomas buried the winner with 3:58 left in regulation Sunday after captain Barrett Hayton, who battled through a shoulder injury to even suit up, tied the game to cap furious third-period rally and beat Russia 4-3 to capture the country’s 18th gold medal at the world junior hockey championship.

“I was trying to attract positive energy,” Thomas recalled of that fateful exchange in Buffalo as a new piece of hardware dangled from his neck. “It’s just funny how life works.”

The Los Angeles Kings prospect poked the puck past a defender before stretching to fire a backhand beyond Amir Miftakhov from the lip of the crease for his first goal of the tournament, sending red-clad Ostravar Arena into a deafening frenzy.

A star with the Niagara Ice Dogs of the Ontario Hockey League, Thomas played mostly a fourth-line role at the under-20 event, but made the most of his five minutes and 23 seconds of action in the final.

He also had a feeling it was going to be his day.

“Usually before games I’m super nervous, especially a game like this,” Thomas said. “I usually throw up before games. Today I didn’t. Usually I nap. Today I felt like I didn’t need a nap. I felt cool, wasn’t nervous.

“I had a feeling Dale was going to call my name,” said the Toronto product. “After the game, Dale mentioned he thought I was going to score. That’s why he put me out there.

“I was just destined to score.”

Connor McMichael, with a goal and an assist, Dylan Cozens and Hayton, in a gutsy performance that ranks among the national program’s finest, provided the rest of the offence.

Hayton, who entered Sunday tied for the tournament’s overall scoring lead with 11 points, hurt his left his shoulder in a 5-0 drubbing of Finland in the semifinals 24 hours earlier, but was good enough to go against Russia.

Not even on Hockey Canada’s radar before the fall and No. 2 goalie to start the tournament, Joel Hofer made 35 saves for a fifth straight victory since coming on in relief in an ugly 6-0 loss to Russia during the preliminary round.

“Ever since you’re a kid, you’re watching every tournament,” said Hofer, who was named the event’s top netminder. “Luckily I got the chance.”

Calen Addison added three assists, while Alexis Lafreniere, who got the overall MVP nod, had two of his own.

Grigori Denisenko, with a goal and an assist, Nikita Alexandrov and Maxim Sorkin replied for the Russians, who have now lost four finals since last winning gold in 2011 and have 10 silver medals since 1995. Miftakhov stopped 26 shots in defeat.

Russia advanced to the final thanks to 5-4 overtime victory in the semis against Sweden, which beat Finland 3-2 for bronze earlier Sunday.

“I’m proud of that team,” said winger Yegor Sokolov. “We gave everything.”

Canada, which had outscored opponents 22-5 over its last four games, fell behind 3-1 at 8:46 of the third when Sorkin roofed one upstairs.

But the Canadians responded 34 seconds later when Addison’s point shot went in off McMichael’s skate for his fifth.

Canada went back on the power play with under nine minutes to go, and Hayton fired his sixth on a bullet into the top corner just 2:01 later.

“He literally did everything he could to play,” Thomas said. “We couldn’t have won that game without him. He’s a hero.”

“He played for his country, he played for us,” Cozens added. “That’s why he’s the captain. He’s a true leader.”

Thomas then pushed Canada in front to finish a three-goal flurry in six minutes 42 seconds.

“I’ve seen him score a lot,” said Hunter, the head coach of the OHL’s London Knights. “He has great hands, a great knack to score.”

The Canadians weren’t out of the woods, however, and had to fight off a 6-on-4 man advantage with under two minutes to go. Canada then got lucky when a clearing attempt that hit a television camera perched above the glass out of play that wasn’t called for a delay-of-game penalty. It would have given Russia a 6-on-3 situation with 1:47 remaining.

“That camera’s probably the MVP of this game,” joked centre Joe Veleno, one of five returning players along with Hayton, Lafreniere, Ty Smith and Jared McIsaac from the team that finished a disappointing sixth on home soil last year. “We got really lucky.

“The Hockey Gods rewarded us.”

The Russians were promptly whistled for interference shortly thereafter, forcing Miftakhov back into his goal.

They imploded further and took another penalty for playing with a broken stick as Canada ran out the clock with a 5-on-3 man advantage of its own before spilling off the bench in celebration.

“It’s hard to describe,” Hayton said of that moment. “Just such a high, emotional state. You kind of go blank.”

And did it hurt his shoulder to raise the trophy after singing O Canada with his teammates?

“That thing was light as a feather,” Hayton said with a grin. “Best feeling in the world.”

After a scoreless, penalty-filled first period where Canada killed of four Russian power plays, Alexandrov finally connected on his team’s sixth man advantage on a deflection.

The Canadians responded after two Russian players were whistled for infractions on the same play. Lafreniere wheeled into the high slot for an effort that Miftakhov stopped, but Cozens was there to bang home his second.

Russia went back in front 2-1 when Denisenko got two whacks at a rebound to score his third.

Canada, which earned its first medal in Europe since winning gold in 2008 when the Czech Republic last hosted, and Russia have provided some of the tournament’s most memorable moments.

The was the 2005 gold-medal game featuring Canada’s jam-packed roster of future NHL stars led by Sidney Crosby, the heroics of John Tavares and Jordan Eberle in 2009, and Russia’s furious comeback from down 3-0 in the third period to win in 2011.

Add Sunday’s performance and the names of Hayton and Thomas to that long list.

“Hearing that gives me the chills,” Hayton said. “It’s hard to think about, but just growing up watching all those guys, watching this tournament ... it hasn’t really sunk in.”

Canada battled adversity throughout these world juniors, including that embarrassing early loss to Russia, the program’s worst defeat in the tournament’s 44-year history.

That game was a disaster on a number of levels, but the teenage roster with a nation’s expectation on their collective shoulders rebounded in impressive fashion.

The Canadians lost Lafreniere — its star winger and projected No. 1 pick at the 2020 NHL draft — to a knee injury, had to deal with the fallout of Hayton forgetting to remove his helmet during Russia’s anthem, and a one-game suspension handed to Veleno, its workhorse centre, for a head-butting incident.

“It’s been a long tournament,” Thomas said of the 11-day slugfest. “Now for it to finally be over and to have gold medals around our necks, it feels unbelievable.” 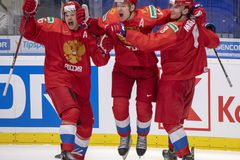 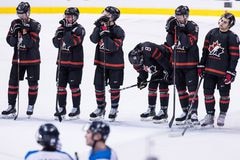 Lafreniere won’t play against Germany; world junior status up in the air
December 29, 2019 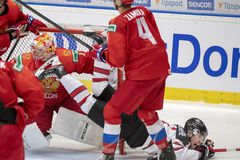