Dominique Ducharme didn’t have time to reflect on his first home game in charge of the Montreal Canadiens as he drove to the Bell Centre on Tuesday afternoon.

After all the teaching and learning during a whirlwind week that saw his boss fired and the 47-year-old go from assistant coach to the top job behind the bench, all he could focus on was the win his fragile group so desperately needed.

Hours later, the Canadiens could finally exhale, and Ducharme could enjoy his first NHL victory.

Carey Price made 26 saves in a bounce-back performance as Montreal snapped a five-game slide by defeating the Ottawa Senators 3-1.

“I really liked the way the guys handled themselves,” said Ducharme, who grew up in nearby Joliette, Que. “I knew they would be ready.”

The floundering Canadiens, who sat atop the North Division with a 7-1-2 record in early February, entered on an 0-2-3 run and had just one victory over their last eight (1-4-3). Ducharme replaced the fired Claude Julien last week in the wake of consecutive shootout and overtime losses to the last-place Senators in Ottawa.

Montreal then blew a 3-1 lead before dropping a 6-3 decision to the Winnipeg Jets in his NHL head coaching debut Thursday, but deserved a better fate in Saturday’s rematch in the Manitoba capital – a 2-1 overtime defeat that saw the visitors dominate play for long stretches.

That moral victory was fine for one night, but Ducharme knew how significant this result was for his locker-room.

“It was important we had a solid game,” he said. “But also getting the win so the guys can see that we’re going in the right direction.

“If we take care of our job, the results are going to be on our side quite often.”

Jeff Petry and Brendan Gallagher each scored and picked up an assist for Montreal (10-6-5), while Tyler Toffoli added another into an empty net.

After allowing 14 goals in his last three starts, Price entered Tuesday with a 5-4-3 record to go along with an .888 save percentage and 3.13 goals-against average in 2020-21. Over his previous six starts, the former Hart and Vezina Trophy winner was 1-4-1 with an .870 save percentage.

But despite strong numbers from backup Jake Allen, who’s 4-2-2 with a .929 save percentage and 2.12 GAA, Ducharme handed the crease to Montreal’s future Hall of Famer.

“I’m just thankful to get back in the net and get that opportunity to get another crack at it,” said Price, who looked lost at times in allowing five goals on 29 shots Thursday in Winnipeg. “(I’ve) just been focusing on the process and keeping things simple.

“The guys played very well in front of me tonight to help me out.”

Artem Zub replied for Ottawa (8-16-1). Joey Daccord stopped 30 shots in his second NHL start for the Senators, who fell to 3-2-0 against the Canadiens this season following Monday’s 5-1 victory over the Calgary Flames.

Ottawa winger Drake Batherson, who hit the post on an early four-minute power play, saw his six-game goal streak, which tied a franchise record, come to an end.

“We had a five-minute breakdown there where we lost focus.”

The Senators continue to occupy the division’s basement, but came into Tuesday having won six of their past nine games, with a 4-1-0 record over the last five contests, including those overtime and shootout victories against the Canadiens.

“The boys poured their hearts out,” Daccord said. “It’s unfortunate we came out on the short end of things.”

The Canadiens opened the scoring at 9:26 of the second period as their struggling power play – which is now being run by newly-promoted assistant coach and former NHL winger Alexandre Burrows – struck on Montreal’s first opportunity.

Petry fed the puck down low to Corey Perry, who in turn found Gallagher in front for him bury his seventh goal of the season and snap Montreal’s ugly 1-for-14 slump with the man advantage.

“Burr had a really good plan,” Gallagher said. “We knew exactly what to expect. He was able to help us and create situations where we felt like we could exploit.”

The home side got another power play off that sequence as Ottawa defenceman Erik Gudbranson was assessed a double-minor for high-sticking Gallagher in the face as he beat Daccord.

The Senators killed off the first two minutes of the infraction, but Petry then blasted a shot off the post and in at 11:30 for with his seventh of the campaign, and first in nine games.

Ottawa cut the deficit in half with 91 seconds left in the period on Zub’s second when he fired low blocker on Price after Canadiens forward Joel Armia and Senators winger Tim Stutzle collided in the slot.

Price made a nice save earlier in the second on Batherson after he stepped around Alexander Romanov and tried a shot upstairs on the shortside.

Despite his struggles, the Canadiens have consistently said they weren’t worried about Price.

“We don’t say that to put unrealistic expectations on him, because it’s unfair to think he’s Superman,” Gallagher said. “We say that because we see the work ethic and the work that he puts in behind the scenes.

“I’ve seen him go through stretches like this in his career, but the way he responds ... he always gets back to the level of play where he’s satisfied with himself.”

Senators winger Austin Watson hit the post seven minutes into the third on what would be his team’s best chance to get the equalizer as Montreal choked the life out of proceedings before finally exhaling when Toffoli fired his 13th into an empty net.

“We felt like we were making life too difficult on our goaltenders,” Gallagher said. “We have two of the best (goalies) in the game, so if we make their jobs easier we’re going to get more wins than losses.”

The Canadiens announced after the game that goalie coach Stephane Waite has been fired and that Sean Burke has been appointed as director of goaltending. ... Petry’s seven goals leads all NHL defencemen. ... The Canadiens were minus top-6 winger Josh Anderson (lower-body injury) for the second straight game. ... The Senators gave starting goalie Matt Murray the night off as Filip Gustavsson dressed as Daccord’s backup. ... Stutzle was named the NHL’s rookie of the month for February. 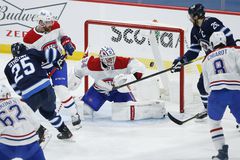 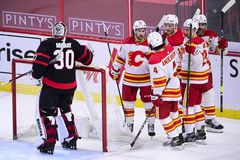