Ken Dryden has taken a legendary quote from baseball pitcher Waite Hoyt – “It’s great to be young and a Yankee” – and used it to describe the hockey phenomenon known as Cole Caufield, all 5 foot 7 and 162 pounds.

The 20-year-old was the only Montreal player to score Monday night as his Canadiens fell 4-1 to the Vegas Golden Knights in Game 1 of their semi-final match in the Stanley Cup playoffs.

The little guy has a flare for the dramatic; his brilliant passing setting up an overtime goal for 21-year-old Nick Suzuki that won Game 5 against the Toronto Maple Leafs in the first round.

This, however, is the present, and Montreal is going to need a lot more from this young duo if it is to stand a chance against the powerful team from Las Vegas.

Caufield scored Montreal’s goal on a rebound in the second period, with his team down 2-0 at the time. It was one of his team-leading six shots in the game and leaves him tied with Shea Weber, Tyler Toffoli and Brendan Gallagher for the most Montreal shots in the 2021 playoffs – quite the accomplishment given that he was a healthy scratch for the first two matches.

“He’s got a bright future because he’s got that mentality.”

Dryden is only too familiar with what it is like to skip from American college hockey to the American Hockey League to the NHL and the Stanley Cup playoffs. He did it in 1971, called up to play a mere six games at the end of the regular season and then leading the Canadiens to the Stanley Cup. Dryden was awarded the Conn Smythe Trophy as the most valuable player of the playoffs.

Dryden played for Cornell University, Caufield for the University of Wisconsin in his home state. In late March, Caufield ended his college hockey career when the Badgers fell to Minnesota’s Bemidji State University in the NCAA tournament. A day later he signed a pro contract with the Canadiens, who picked him in the first round of the 2019 draft, and was told to report to the Laval Rocket, Montreal’s AHL affiliate.

Despite often being dismissed for his size, Caufield has excelled at every level. He won a gold medal at the world juniors. He won the Hobey Baker Award as the top player in NCAA hockey. He set a record with 126 goals during his time with the USA Hockey National Team Development Program. He was named Big Ten rookie of the year when he joined the Badgers and the following year led the NCAA in scoring.

When the Canadiens stalled near the end of the season and were struggling mightily against the Leafs in the first round of the playoffs, social media in Montreal was calling for the team to get him out of the press box and onto the ice. Fans knew what they were getting, as RDS televised the Badgers’ games over the winter.

“It was something special to have my college games showing on Canadian networks,” Caufield told the media.

It was also just the beginning. The fans’ calls were finally answered and, since then, Caufield has shown, as he always has, that he can excel at any level.

Teammate Josh Anderson has been impressed by Caufield’s play since he was called up from Laval after posting three goals and one assist in two AHL games. In 10 regular-season games with the Canadiens, Caufield had four goals and five points.

“Usually those small guys are very difficult to hit,” Anderson said after the morning skate. “He’s a really shifty player. He’s played this game for a long time and he knows how to get out of those positions. He’s not afraid to go in the corners. I think you saw that against Winnipeg, where sometimes he’s taking the big hit to make a play. You can see his confidence growing each game and him getting comfortable, so it’s great to see.”

“He’s had the kind of year that has been just amazingly exciting,” Dryden said. “From one high to the next.

Dryden wonders what it all must feel like to young Caufield. He remembers his own rookie Stanley Cup experience vividly, and says that Caufield will never forget this “surreal” year.

“You are just riding the emotional wave and it’s fantastic. He doesn’t even have time to pinch himself.” 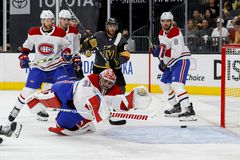 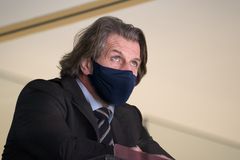 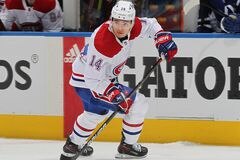