There are a handful of firmly entrenched storylines associated with teams bounced from the Stanley Cup playoffs.

There is the team of which great things were expected but which disappointed again (see the Toronto Maple Leafs). There is the team with a generational talent leading it but still can’t get off the ground (see the Edmonton Oilers). There is the team that most believed had the type of battle-tested grit and speed throughout the lineup that made it the one to beat. Instead, its playoff failure has incited an array of questions (see the Philadelphia Flyers).

And then there is the team of young stars that got bounced but is recognized as one that is on the rise and could be soon poised to make a multi-year run for Lord Stanley’s mug (see the Vancouver Canucks).

In a town famous for taking its playoff losses hard, there was less anger in Vancouver and surrounding environs than normal following the Canucks’ Game 7 loss on Friday to the Vegas Golden Knights. There were no cars set on fire or bricks tossed towards police. There was instead an abiding acceptance that patience will be required with this team but it may well be worth the wait.

It’s difficult to think of a period in the team’s 50-year history imbued with as much excitement over its young core than right now. Henrik and Daniel Sedin would become huge stars eventually but that was not evident in their first few years in the league. That is not the case with 21-year-old centre Elias Pettersson, 20-year-old defenceman Quinn Hughes, 24-year-old captain Bo Horvat, 22-year-old sniper Brock Boeser and 24-year-old goaltender Thatcher Demko.

That is as solid a young core as there is in the league. And it’s inconceivable to imagine this group, along with some excellent, top-end veterans now surrounding it, won’t be making its presence felt in the postseason for some time.

In other words, their promise was enough to deter the team’s fans from torching things after a second-round exit from the playoffs. (Third round if you include the team’s victory over Minnesota in the opening, best-of-five qualifying round).

This does not mean, however, that general manager Jim Benning doesn’t have some tough decisions awaiting him this off-season.

The first one is in goal. Jacob Markstrom has been the team’s MVP the last two seasons. He alone kept the Canucks in games in which they had no business being. Now an unrestricted free agent, he has earned himself a healthy raise from the US$3.6-million he’s averaging a year currently. But then he got injured in the series against Las Vegas, which led to the show-stopping playoff debut of his net-mate Demko and everything changed.

It seems inconceivable that the Canucks won’t prioritize Demko in terms of their near-term future. As we say, Markstrom, 30, who has consistently battled injuries, will be demanding a significant raise, one the Canucks, a team with little cap room, will be hard pressed to meet. The fact there is an expansion draft after next season further complicates the matter. My guess is the Canucks’ No. 1 goalie has likely played his last game with the team.

Benning will have to offer free-agent winger Tyler Toffoli enough money to stay, after giving up a player, a prized prospect and a second-round pick to Los Angeles to get him last February. That will have been a huge price to pay if the team was only able to use his talents for less than a full season.

Gritty veteran defenceman Chris Tanev is also a UFA. It’s impossible to envision this shot-blocking machine suiting up for anyone else. He is beloved by his teammates. He was a perfect partner for the precocious Hughes. But he has his price.

Then there are question marks around players such as Jake Virtanen, a restricted free agent who scored 18 goals during the regular season but is maddeningly inconsistent. Defenceman Troy Stecher is also an RFA. He may be expendable with some young, bigger defenceman in the Canucks system ready to make a leap to the big club.

This off-season is not likely to be the one owner Francesco Aquilini goes all in on big-ticket, free-agent acquisitions. First, the team doesn’t have a lot of cap room, even if Markstrom goes elsewhere. But also, there is the question of spending big when the team’s fans are unlikely to be able to cheer the players on in person.

The 2020-21 season is likely to begin in hubs, just like the playoffs. And those hubs are likely to be in the U.S. this time, not Canada. And until the all-clear is given regarding COVID-19, this will remain the case.

So Canucks owners and management will likely allow the team’s young, promising nucleus another year to get bigger and faster and more Stanley Cup ready. And that will be just fine for fans who haven’t had this much to cheer about in years.

Golden Knights beat Canucks 3-0 in Game 7 to knock Vancouver out of playoffs
September 5, 2020 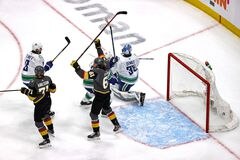 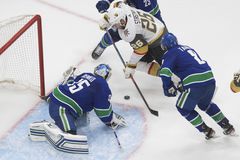 Shot fatigue: Canucks know they need to step up defence in Game 6 versus Vegas
September 2, 2020 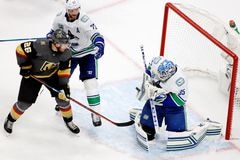