The NHL’s Canadian-based North Division has been impacted by COVID-19 for the second time in less than two weeks.

The league postponed Wednesday night’s game between the Canucks and Flames after a second Vancouver player and a member of the team’s coaching staff were added to the league’s COVID-19 protocol list.

Canucks forward Adam Gaudette, who was pulled from Tuesday’s practice following a positive test result, was added to the list that afternoon.

Vancouver and Calgary were preparing as if Wednesday’s game would still go ahead – both teams held morning skate’s and virtual media availabilities at Rogers Arena – but the league announced its decision in a press release roughly 90 minutes before puck drop.

The NHL, which said it would provide a further update Thursday, added the call was made by medical teams from the league, NHL Players’ Association and Canucks.

A player on the COVID-19 protocol list has not necessarily tested positive.

The Montreal Canadiens had four games postponed – the first contests scratched in the North this season – last week when forwards Jesperi Kotkaniemi and Joel Armia were added to the protocol list.

Those postponements, which included the shuttering of the Canadiens’ practice facility, forced the rescheduling of 11 games.

Montreal general manager Marc Bergevin said at the time one of his players tested positive for a coronavirus variant, which precipitated the shutdown. Kotkaniemi was removed from protocol Tuesday when the Canadiens returned to the ice against the Edmonton Oilers, but Armia remains on the list.

Canucks head coach Travis Green would not say following Wednesday’s morning skate if Gaudette had tested positive for a variant.

“I’m not going to get into personal stuff with Adam Gaudette,” he said. “We’re preparing to play, and planning to do so.”

Green added his club felt they were in the clear with just one positive test following some nervous hours.

“(Tuesday) when you get the news, you’re always wondering about it,” he said. “Last night we had a pretty good idea we were good to go this morning.

“We’ve tried to just stay focused on that task, and let the people that advise us on the protocols let us know if there’s anything else changing.”

The NHL’s truncated 56-game schedule has now seen 42 contests postponed because of COVID-19.

The league’s protocols require players and staff to be tested daily. Any time an individual’s initial test comes back positive, the lab does a second test on the initial sample.

If the second test is negative, a second sample is collected. But if that sample returns a positive result, it’s considered to be a “confirmed positive.”

Vancouver and Calgary are tied for fifth in the division with identical 16-18-3 records, five points back of Montreal for the fourth and final playoff spot, although Montreal has a big advantage with five games in hand.

The Flames are scheduled to visit the Edmonton Oilers on Friday before opening a four-game homestand against the Toronto Maple Leafs and Canucks beginning Sunday.

The Canucks were coming off a six-day break heading into Wednesday before getting ready to embark on a seven-game road trip set to begin Saturday in Edmonton.

That’s all now very much up in the air.

“It’s not ideal,” Miller said Wednesday morning. “Everybody’s trying to do the right things to not have this situation happen.

“Hopefully we can minimize the damage here, and hopefully Gauds isn’t feeling too poorly.” 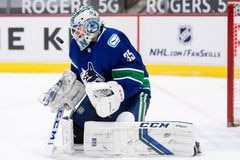 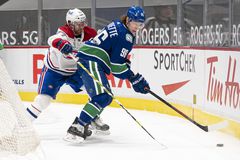