Canada is back on top of the world again in women’s hockey, and golden girl Marie-Philip Poulin was the hero again.

As one of the fiercest rivalries in North American sport was back on ice after an agonizing two-year pause, Canada beat the United States to win gold at the women’s world hockey championships in a 3-2 overtime thriller.

Poulin, the captain – and author of many other memorable Olympic game-winners in the past – worked her magic once again. This time she scored a bar-down contest-sealer in sudden-death overtime of Tuesday’s championship game in Calgary, breaking a lengthy U.S streak at the event.

It sets the stage for the fast-arriving 2022 Beijing Olympics, scheduled for February, when the foes will clash on the biggest stage available to their sport.

Canada had not taken gold at the world championships since April 4, 2012, when it toppled the United States in Burlington, Vt. Since then, the two powerhouses of women’s hockey had tangled for gold in two Olympic finals – Canada triumphing in 2014 in Sochi, the U.S. winning in Pyeongchang in 2018.

But the United States had recently dominated the world championships – grabbing gold at the past five in a row.

The first period was all United States. The Americans struck twice early, both by Alex Carpenter, who overpowered Canada’s defenders in the slot and banged in a pair of eerily similar loose pucks past goaltender Ann-Renee Desbiens.

That was two fast goals on the first five U.S shots. It was a heaping dose of pressure for the host Canadians who had experienced adversity just once to that point in the tournament – 11 days earlier when trailing Finland 2-0.

Tuesday’s game looked nothing like the; previous meeting between these teams – a dominant 5-1 Canadian win five days earlier in round-robin play. That victory had been Canada’s first over the U.S. at the worlds since 2013, and it suggested that maybe Canada had regained the balance of power.

They quickly tied it up, sparked first by a little luck. With U.S. standout Brianna Decker in the penalty box for a faceoff violation, Canada made good on its first power-play opportunity of the game. Alternate captain Brianne Jenner seized a rebound while making havoc in front of the net, swiftly pulled it from backhand to forehand and buried it past goalie Nicole Hensley.

It had been an agonizing 871 days since Canada settled for bronze at the 2019 world championships in Espoo, Finland. It had missed out entirely on the gold-medal game in that tournament after a shocking semi-final loss to the Finns. It was the only time in the history of the event (which debuted in 1990) that Canada didn’t play in the final. The U.S. took the 2019 title and Finland earned silver.

Then followed a tumultuous two years for their sport. The Canadian Women’s Hockey League – pro outlet for many of the North American stars – suddenly shut down in early 2019. The women answered by launching a pop-up travelling tour, the Professional Women’s Hockey Player’s Association. They were trying to build visibility for a viable new pro league, but their efforts just barely got going before the pandemic hit. Then facility closures and travel restrictions interrupted the women’s training and game opportunities, especially inside Canada.

Their world championships – typically held in April – were cancelled two years in a row. The event was moved from initial host city Truro, N.S. to WinSport Arena in Calgary and staged without fans.

The small pockets of family members and volunteers in Calgary’s otherwise fan-less stands suddenly got very loud as the game was knotted up. Canada outscored its foes 16-8 in that second period, setting the tone for another dramatic finish in this storied rivalry.

Both teams furiously killed off penalties in the third as the game remained agonizingly tied. There were sprawling goalies and near misses. In the final 12.9 seconds of regulation time, Canada had two faceoff opportunities to score a game-winner, but the U.S. held them off.

Just like seven of the past 10 world championship finals before this one, it went to overtime. They went 3-on-3. Marie-Philip Poulin believed she had scored, even celebrated, but had to endure a brief official review to seal it. Soon the Canadians were on the Calgary ice in a pile.

They went 3-on-3, best on best with lots of wide open ice.

Then just as she had in the gold medal finals in the 2010 and 2014 Olympics, Poulin delivered the game winner. She absorbed a pass from Jenner and sniped the puck up high over Hensley’s glove, into the top corner. She celebrated even as the officials were slow to recognize the goal and the game kept going.

Soon the Canadians spilled off their bench to celebrate in a pile on the ice. It was Poulin’s first world title as Canada’s captain, and it was she who placed the medals around the necks of her teammates and staff. They celebrated with family through the plexi-glass shield that surrounds the ice.

The few additional seconds were nothing after waiting this long. The humble champ deflected all the attention when asked in the postgame Zoom news conference what makes her so clutch, choosing to shine the light on Jenner’s assist instead.

“When you surround yourself with great people, it makes you better every day,” said Poulin.

Jenner confirmed that Poulin hates to answer questions about herself, and did her best to explain Canada’s veteran superstar.

“She has everything that you need in a great hockey player … to have that much talent and the work ethic that she has … I mean that’s why she wears the ‘C’ for us,” said Jenner. “It was an honour to have the assignment of getting the puck on her stick and I had a lot of fun doing that.”

Canada now has 11 gold medals at the women’s world hockey championships, and the U.S. has nine.

Next comes Team Canada’s centralized Olympic training time together in Calgary. Meanwhile, the U.S women will move to Blaine, Minnesota to do their Olympic residency. Their next clash is right around the corner. 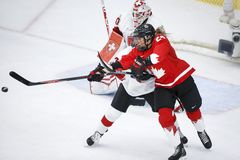 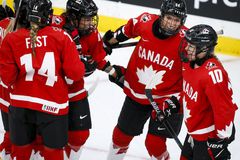 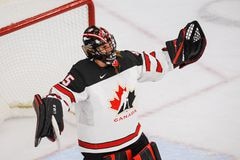