Jimmy Golen
BOSTON
The Associated Press
Published May 31, 2021 Updated May 31, 2021
For Subscribers
Comments
Text Size
Please log in to listen to this story. Also available in French and Mandarin. Log In Create Free Account

Casey Cizikas saw the open ice ahead. And he knew the Boston defence would be coming on quickly.

“I knew that D-man was going to be tracking me hard,” Cizikas said Monday night after his breakaway goal with 14:48 gone in overtime gave the Islanders a 4-3 victory over the Bruins and sent the second-round playoff series back to New York tied at one game apiece.

“I just wanted to get a shot off,” Cizikas added, “and I was able to beat him.”

Cizikas picked up a loose puck that bounced off Boston forward Charlie Coyle’s skate and he raced in all alone on Tuukka Rask before beating him high on the stick side. A fourth-line centre, Cizikas hadn’t scored since April 1 and hadn’t netted a playoff goal since 2015.

“It’s been a real long time. You’re just trying to do the right things in overtime. Be in the right spot,” he said. “I was lucky for that puck to pop off in the middle there, and give me an opportunity to get that one.”

Semyon Varlamov returned to the net to make 39 saves for the Islanders, who head back to the Nassau Coliseum in Uniondale, New York, for Game 3 on Thursday night. The Islanders said they will be increasing capacity to 12,000 for the second round after hosting 9,000 for Game 6 of the first-round series against the Penguins.

“We know how that barn rocks,” Cizikas said. “We’re going to build off that crowd. We’re looking forward to it.”

Josh Bailey, Kyle Palmieri and Jean-Gabriel Pageau all scored in the second period – with a little help from the Bruins – as the Islanders rallied from a 1-0 deficit to take a 3-1 lead.

But Brad Marchand set up Patrice Bergeron’s one-timer to make it a one-goal game midway through the third. Then Marchand tied it with a goal of his own about five minutes later.

“Obviously, we were on our heels a little bit, but I thought we regrouped,” Islanders coach Barry Trotz said. “That’s the type of series I expected going into it, and I expect the same when we get on the Island.”

Varlamov, who started both losses in the six-game victory over Pittsburgh in the first round, stopped all six Boston shots in overtime.

“We made a play that obviously was ill-advised, and they scored on a breakaway,” Bruins coach Bruce Cassidy said. “Here we are, it’s 1-1. They’re a good hockey club. We certainly didn’t expect it to be easy.”

Tuukka Rask made 38 saves in his 100th career playoff game, and Coyle scored Boston’s other goal.

But that doesn’t mean the Bruins weren’t putting pucks in the nets.

After Coyle gave Boston the lead in the first, Bailey tied it when he bounced one off Bruins defenceman Jeremy Lauzon’s skate and into the goal. Four minutes later, Rask himself swiped a puck into the net with his glove after saving Palmieri’s attempt to stuff it in.

With less than three minutes left in the second, a pass from Mathew Barzal was deflected by Boston defenceman Connor Clifton right to Pageau, who beat Rask to make it 3-1. It was Boston’s first two-goal deficit this post-season.

But Bergeron made it 3-2 midway through the third period and, with just under five minutes left in regulation and the Islanders short-handed for a too many men penalty, Marchand wristed one past Varlamov to tie it.

“Let’s face it: The first goal went in off our skate, last goal hit our skate (and) gets them a breakaway,” Cassidy said. “So, sometimes you’ve got to be fortunate in this game, too. They took advantage of the last good bounce.”

Varlamov started in place of Ilya Sorokin, the rookie who started all four wins in the first-round series against Pittsburgh but lost 5-2 to Boston in the second-round opener on Saturday.

The game was the second for Boston since the state lifted COVID-19 restrictions on attendance. A sellout crowd of 17,400 was on hand, chanting nasty things about New York and Brooklyn Nets guard Kyrie Irving, who beat the Celtics for 39 points in their NBA playoff game a night earlier.

Irving had to dodge a water bottle as he left the court on Sunday night; a fan was arrested and facing a ban from the building. The Bruins game featured nothing more than obscene chants.

Bruins forward Sean Kuraly left the game with about five minutes left in the first period after taking a stick to the neck from Islanders defenceman Nick Leddy. Kuraly returned before the period was over. 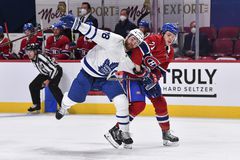 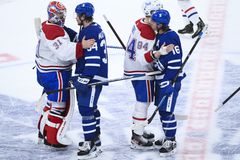