Connor McDavid didn’t want to answer any questions about his knee. The brace hugging the superstar’s left leg and an accompanying limp said enough.

Speaking at a promotional event on Tuesday morning, the Edmonton Oilers captain declined to discuss his recovery from the injury suffered on April 6 after he crashed into a goal post during the team’s regular-season finale against the Calgary Flames.

X-rays came back negative, but the results of a subsequent MRI found a small tear in the centre’s posterior cruciate ligament.

The Oilers announced at the time McDavid wouldn’t require surgery, but the brace on the two-time Art Ross Trophy winner’s knee was clearly visible under his black pants Tuesday, appearing to stretch from halfway up his calf to the midpoint of his thigh.

The 22-year-old, who was on hand as an ambassador for Canadian Tire Jumpstart Charities to surprise a group of children at a park in Toronto’s north end, wouldn’t say how rehabilitation has been going or if he’s been on the ice.

“We’re here just to celebrate Jumpstart and the opening of the new playground,” said McDavid, who initially thought he’d broken his leg in the moments following the collision. “That’s all I’m focused on [today].”

The injury wrapped up a miserable 2018-19 for the Oilers, one that saw them fire head coach Todd McLellan in November before handing general manager Peter Chiarelli his walking papers in January.

Edmonton finished 11 points back of the second wild-card spot in the Western Conference as the franchise missed the playoffs for the third time in McDavid’s four campaigns in Edmonton.

The Newmarket, Ont., product did his part for a top-heavy roster, finishing the season second in league scoring with 116 points (41 goals, 75 assists), but it wasn’t nearly enough for a club that has failed to reach the postseason in 12 of the past 13 springs.

“It was an emotional ride, and I’m looking forward to a little stability.”

McDavid and the Oilers hope that stability will come in the form of two new hires – GM Ken Holland and head coach Dave Tippett. Holland and McDavid, who won the Hart Trophy in 2016-17 as league MVP, have exchanged texts and plan to meet in person soon, while Tippett spoke briefly over the phone with his new meal ticket.

Holland joined Edmonton after a long career in Detroit, where he helped guide the Red Wings to Stanley Cup victories in 1998, 2002 and 2008 as GM.

“He comes with lots of experience [and] is a guy that’s been wildly successful,” McDavid said. “I’m really happy with that and really looking forward to working with him.”

Tippett, meanwhile, has coached nearly 1,200 combined regular-season and playoff games in the NHL with Dallas and Phoenix/Arizona. He worked previously with McDavid as an assistant for Team North America at the 2016 World Cup of Hockey and spent the last year as a senior adviser to Seattle’s expansion franchise.

“He’s been around for a long time and has had lots of success and coached different styles of hockey – coached offensive, coached defensive,” McDavid said. “He has all the tools.”

Speaking at the NHL’s annual scouting combine in Buffalo on the weekend, Holland said he hopes McDavid is excited about the future in Edmonton.

“We all want to win, and we’re all hopeful we can put something together here and get more competitive,” said Holland, who owns the eighth pick in the coming draft in Vancouver. “At the end of the day, you’ve got to have hope.

“You’ve got to have hope and belief that you’re going to be good.”

McDavid and Leon Draisaitl (105 points in 2018-19) give the Oilers an impressive one-two punch after finishing second and fourth in scoring last season, respectively, but it’s no secret there are significant holes that need to be filled pretty much everywhere else.

“Lucky it’s not my job to decide that,” McDavid said in sidestepping a query about what needs fixing. “There’s lots of people higher up that figure that stuff out.

“I’ve just got to worry about playing.”

But how patient is McDavid willing to be with the rebuild in Edmonton, one that could take a lot more than one season?

“That’s not a question I’m going to answer.” 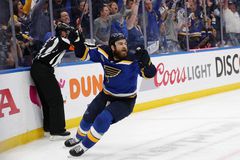 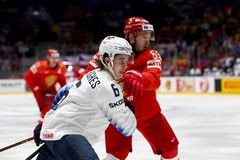 Opinion
Binnington an overnight success that was years in the making
May 31, 2019 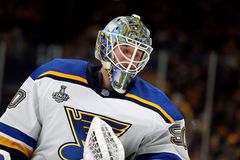