It is unusual for an NHL game that is highly hyped to live up to lofty expectations.

It happened at Scotiabank Arena on Monday night when the Maple Leafs and the Oilers provided thrills and chills in a rollicking matchup won by the visitors, 6-4.

League scoring leader Connor McDavid buzzed around like one of Stompin’ Tom Connors’s bumble bees, scoring one highlight-reel goal and assisting on three others. Leon Draisaitl chunked around like he owned the place, registering his 25th goal and adding an assist. Auston Matthews rifled shots at Edmonton goalie Mike Smith but was unable to beat him until the outcome was already decided late in the third period.

The victory was Edmonton’s first in Toronto since Dec. 2, 2010. The loss was the Maple Leafs’ first in regulation time since a 4-2 defeat in Calgary on Dec. 12.

Frederik Andersen, appointed an All-Star last week for the first time in his career, was yanked early in the second period after allowing three goals on 19 shots. His night came to a premature end after Darnell Nurse and Kailer Yamamoto scored one minute and 11 seconds apart.

It is only the second time Andersen has been pulled from a game this season.

Michael Hutchinson, who won his last three starts after beginning the season 0-5-1, found himself in the unusual position of trying to bail out Andersen. Hutchinson did well early on, but eventually succumbed to pressure. He finished with 13 saves on 16 shots.

“From the start it didn’t seem like it was going to be our day today,” Toronto head coach Sheldon Keefe said.

Andersen was angry as he took a seat on the Toronto bench but Keefe said he removed him to protect him. Andersen faced 17 shots in the first period alone.

“It almost felt like he had a full game’s worth of work already,” Keefe said. “I was not going to let Freddie play from behind that.”

Toronto’s game plan was to keep the puck out of McDavid’s hands as much as possible and to avoid taking penalties. The Leafs were unable to do either.

McDavid was awarded assists on goals by Oscar Klefbom, Darnell Nurse and Alex Chiasson, and then ended any suspense over the outcome with a breathtaking rush to the net before scoring to put Edmonton ahead 6-3 with 8:34 remaining.

The Oilers superstar drove to the net and suddenly shifted gears, flew around Morgan Rielly and roofed a shot over Hutchinson. It was so fast and so superb – and just another goal to be added to the long list of others that fans will review again and again online.

“I know Morgan is one of the top defencemen in the league and a great player,” Chiasson said in the Oilers’ exuberant dressing room. He called it the nicest goal he has ever seen. “It was just pure skill. We are so lucky to have him.”

Klefbom, who opened the scoring with 12:09 left in the first period, said he felt bad for Rielly.

“I’ve seen Connor do it multiple times now,” Klefbom said. "If I was out there defending against him I think I would just lay down and hope he loses the puck.

"He’s so good with the puck at high speed that he makes it almost impossible on defencemen. You can’t skate backwards fast enough to keep up with him. Basically, he can go wherever he wants.

Toronto applied pressure early on but Smith was up to the task. The 37-year-old who made 35 saves in a 4-1 win in Boston on Saturday had another 32 on Monday. It was his third start in a row and he got the nod over Mikko Koskinen due to his strong performance two days earlier.

Smith made a big save on a hard shot by Mitch Marner less than a minute into the game, then stymied a wrist shot from Tyson Barrie and stopped another that Matthews let loose as he slid in front of the crease. That was followed by a nifty glove save on a shot from a difficult angle by Rielly.

Andersen started out just as hot. He stopped back-to-back attempts from McDavid, and five shots by the Oilers superstar in the first period. One was a spectacular effort by both of them. McDavid weaved through traffic to get into position for what looked like a sure goal that Andersen stole away.

The victory was Edmonton’s third in the last four games and the loss ended Toronto’s points streak at 10 games. The team is now 15-5-1 since Keefe took over as head coach on November 20.

The Maple Leafs will try to rebound when they take on the Winnipeg Jets at Scotiabank Arena on Wednesday. The Oilers will spend the day in Toronto on Tuesday before travelling to Montreal for a game against the Canadiens on Thursday.

“We got six tonight. I liked all of them.”

“One was just a little more flashy than the others.” 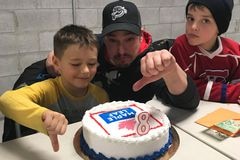