Sportsnet apologized Sunday for hockey commentator Don Cherry’s televised rant about his belief that new immigrants don’t wear poppies, and in turn don’t support veterans – comments that sparked a swift backlash from the public, politicians and the NHL.

The station’s apology was echoed by “Coach’s Corner” co-host Ron MacLean in a segment that aired at the beginning of a Sunday evening broadcast, saying Cherry’s remarks don’t represent his own views or those of parent company Rogers Media.

“Don’s discriminatory comments are offensive and they do not represent our values and what we stand for as a network,” Sportsnet President Bart Yabsley said in a statement earlier Sunday. “We have spoken with Don about the severity of this issue and we sincerely apologize for these divisive remarks.”

MacLean also shouldered some of the responsibility in his statement.

“Don Cherry made remarks which were hurtful, discriminatory, which were flat out wrong … I owe you an apology, too. I sat there, did not catch it, did not respond,” MacLean said.

“Last night was a really great lesson to Don and me. We were wrong, and I sincerely apologize. I wanted to thank you for calling me and Don on that last night.”

A spokesman for Sportsnet declined to comment on why Cherry himself didn’t make the apology.

Cherry, 85, singled out new immigrants in Toronto and Mississauga, Ont., where he lives, for not honouring Canada’s veterans and dead soldiers during his weekly “Coach’s Corner” segment on “Hockey Night in Canada.”

“You people … you love our way of life, you love our milk and honey, at least you can pay a couple bucks for a poppy or something like that,” Cherry said.

Cherry did not respond to multiple phone calls seeking comment.

The National Hockey League said in a statement that Cherry’s remarks were “offensive and contrary to the values we believe in.”

“We’re proud of diverse cultural heritage and we’ll always stand up for it,” she said on Twitter. “New immigrants enrich our country for the better. We’re all Canadians and wear our poppies proudly.”

“Cherry’s remarks were ignorant and prejudiced, and at this point in our history can’t go without comment,” he said.

Outrage was building online on Sunday with many on Twitter calling for Cherry to be fired.

Yet hundreds of social media users supported Cherry’s comments. Some said they wanted more people to wear poppies, while others pointed fingers at immigrants.

Rumours circulated about the possibility of Cherry being cut from “Coach’s Corner” earlier this year after a Toronto Sun columnist wrote that his return to the show had not been confirmed by the summer.

Cherry said at the time that he was not retiring from the decades-old show yet.

Hockey Night in Canada was a longtime CBC Saturday night staple, but the show and its games moved to Sportsnet when Rogers landed a 12-year, $5.2 billion national broadcast rights deal with the NHL that began in 2014.

The show is still broadcast on CBC in a sub-licensing deal with Rogers Media, which owns Sportsnet. But the show is run by Sportsnet and filmed in its studio in the CBC building in Toronto.

“As Rogers Sportsnet is the national rights holder for NHL Hockey in Canada, CBC has no purview over any editorial (choice of commentators or what they say) with respect to Hockey Night in Canada,” CBC spokesman Chuck Thompson said in an email.

Don Cherry appreciates the Hurricanes’ ‘Bunch of Jerks’ shirts, but still doesn’t like their celebrations
February 20, 2019 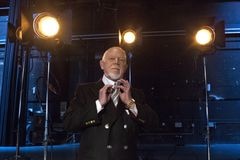 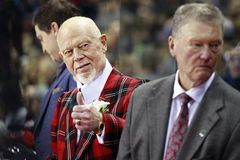