If Ayron Sequeira had her way, the archers in the Vegas Golden Knights’ pregame extravaganza she helped conceive would be shooting real arrows, not virtual ones, from high above the hockey rink in T-Mobile Arena. And those arrows would be on fire, as in real flames, hot and everything.

Then again, if she also had her way, the Nashville Predators, instead of the Winnipeg Jets, would have advanced to face Vegas in the Western Conference finals. That way she could have reconnected with this animal trainer about having a tiger — with capped teeth, preferably, to evoke the Predators’ saber-toothed mascot — joining the performance.

No idea is too grand for the Golden Knights’ game presentation staff — not in this roller-coaster-on-a-casino kind of city, and certainly not for a group empowered with the creative freedom to envisage a spectacle representative of Las Vegas without hewing to its basest stereotypes.

Since the beginning of the NHL season, the game presentation staff has established a sense of place without belabouring it, selling hockey in a market unbound by tradition or history by seizing less on the Vegas and more on the Golden Knights.

Those two elements converged in the latest production, unveiled Wednesday night before Game 3 of the conference finals, Vegas’s first home game of the series. In a sword fight midway through the roughly 10-minute show, the golden knight overwhelmed a villain who had been wielding a Winnipeg Jets flag.

This being Vegas, the vanquished rogue did not skate off the ice but flew, hoisted into the rafters by an elaborate rigging system.

The crowd gasped, surprised by the moment but not the theatrics. The medieval warrior motif entertained during the season, but has amazed during the playoffs, much like the team itself. As the Golden Knights recalibrate expectations for every successive expansion franchise, adding two playoff series victories to a division title, their pregame ceremony has become a phenomenon central to their identity, featured on broadcasts and scrutinized on social media — the best show in the NHL before, well, the best show in the NHL.

“We’re always going to be secondary to what’s going on in the game — that’s the whole reason why we’re here,” said Lee Orchard, who plays the golden knight character. “But we enhance the experience.”

From series to series, Orchard wonders what Sequeira and Jonny Greco, who oversees the game production staff, have concocted. Last week, Greco sent him a text message that read, “I’m going to be asking a lot more of you.”

By that, Greco meant that Orchard, who bears an uncanny resemblance to actor Jason Statham, would find himself sitting in a dimly lit room choked with fog on Tuesday afternoon. Before him was a table crammed with swordfish steaks that Orchard, in full knight regalia, would stab with his swords and pretend to eat — signifying the (San Jose) sharks the Golden Knights feasted on in last round.

Greco also meant that Orchard would, after conquering that flag-waving villain, remain on the rink alone, reacting to sounds of a jet that would be projected on the ice. He would block missiles with his shield and then slice the jet in half with his sword before the jet crashed and exploded.

However fanciful, it all seemed pretty standard to Orchard, who after a rehearsal Monday asked Greco whether a triumphant nod would suffice as a response to defeating the jet.

“No, you just destroyed the enemy in the most ridiculous way possible,” Greco told him. “You’ve got to be a maniac.”

Anything less than full maniac would weaken the narrative, diminish its authenticity, and few things in this realm are as important to Greco as the story.

The Golden Knights’ evolution from expansion darling to full-fledged juggernaut is reflected in the beginning to the pregame presentation: a series of pejorative quotes shown on the video screen and the ice about Vegas’s viability as a hockey market and a franchise, spliced with bursts of highlights. After a medieval-themed video detailed how the “war for the West” had reached its final stage, an element new to this round — the archers — appeared at the castle situated on the top level, behind one of the goals.

For months the staff had been discussing adding archers, as long they could fit into the larger story. With interest in the team swelling, Greco figured, the archers could represent the expansion of the Golden Knights’ army.

So, to see how the masters incorporated archery into their performances, Tyler Cofer, an entertainment producer, attended a Sunday night showing of the Cirque du Soleil production Ka. By Tuesday morning, Cofer was at Bass Pro Shops for bow and arrow accessories and Hobby Lobby for arts and crafts supplies.

Cofer joined the Golden Knights from Oklahoma City, where he worked for the Thunder, toting valuable understanding of cultivating a fan base in a city that never had a professional team. In assembling the staff, Greco valued diversity — of experience, of expertise, of perspective.

Sequeira had worked in Western expansion markets such as San Jose and for a venerable Original Six franchise in Detroit, where, charged with planning the ceremony honouring the Red Wings’ 2008 championship team for her first game, she hired an orchestra to perform We Are The Champions.

She balances out Greco, who with a daughter named Goldie and a golden retriever at home, seemed destined to be part of the Golden Knights. His sensibilities, from working most recently with World Wrestling Entertainment, lean toward glitz and pyrotechnics.

“I’m like, how do we light everything on fire?’” Greco said.

Outside the entertainment staff’s offices at the team’s headquarters in nearby Summerlin, storyboards loaded with drawings of fallen kings (Los Angeles) and circling sharks (San Jose) depict the progression of those weird environments. Before Winnipeg ousted Nashville on May 10, the group sketched a tentative sequence for each opponent — alas, no tiger — and then mobilized as soon as the Jets won.

Within minutes of Winnipeg’s victory, Zack Frongillo, who plays the villain in the sword battles, texted Greco offering to fly. Soon, Greco was reminding him to take his Dramamine.

“You never think that when you audition for the promo team in August that you’d be flying in May,” Sequeira said Tuesday, while watching from the stands as Frongillo went up and down, again and again.

After four hours of rehearsals, everyone involved retreated to an auxiliary locker room, where Greco urged them to savour the moment. When he worked for the Cleveland Cavaliers, brainstorming opening-night concepts with LeBron James, he planned the regular season knowing the team would make the playoffs.

Even an optimist such as Greco — he corrects himself whenever he starts to say challenge instead of opportunity — had long presumed his job this season would finish on March 31, the Golden Knights’ home finale. But they clinched a playoff berth five days earlier.

In the minutes before the show began Wednesday, Greco sat in his usual spot, beside Sequeira at the producers’ table behind Section 14. He pondered the ratio of man hours invested to the duration of the performance — “about 100 for, what, 10 minutes?” he said — and bumped fists with Trent Bailey, an animator, telling him how proud he was of him, of what they had accomplished.

For those next 10 or so minutes, Greco watched, detecting some timing issues that irked him, but mostly he listened. The crowd was standing, engaged, loud.

“All I care about,” Greco said.

The arena throbbed with “Go Knights Go!” chants and was still pulsing when Jonathan Marchessault out-muscled defenceman Jacob Trouba in the Jets’ zone and scored just 35 seconds into the game, the first goal in a 4-2 victory. One sublime exhibition of artistry had followed another.

Amid the din, Greco said, “We didn’t rehearse that part.” 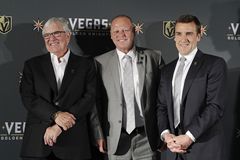 Viva Las Vegas: Golden Knights defy the odds and reunite a community
May 18, 2018 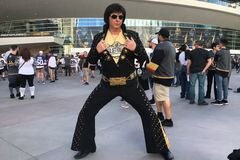 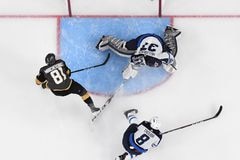