Across the street from Rogers Place, a pub patio was prepped with picnic tables and television screens slung above them Friday.

On the eve of the 2020 NHL playoffs, numerous downtown Edmonton eateries had outdoor spaces ready for whatever being an NHL hub city could bring them.

What kind of buzz and business a dozen Western Conference teams cloistered in town could generate was yet to be known, but they wanted to be ready.

“It has to stimulate the economy somehow,” said Edmontonian Khaleed Valani. “Honestly, I’m just glad to have hockey back.”

A corridor of blue netting slashed through the downtown core and closed off a street south of the arena.

Six of the teams staying at one of the two designated hotels use it for shielded passage to Rogers Place.

The players’ recreation area in the lee of the other hotel and Rogers Place is also walled off by blue netting.

You can hear music, see basketballs hitting backboards and silhouettes of players sitting at tables, but you wouldn’t be able to point out Edmonton Oilers star Connor McDavid eating ice cream.

Edmonton has been a notoriously tough sell to the NHL’s free agents in the past, but Valani believes players from other teams will get a more favourable impression of the city this summer that could pay off for the Oilers down the road.

“Playing with Connor McDavid and Leon Draisaitl I think a lot of players are going to come and they’re going to want to be a part of Edmonton.”

There’s certainly pride in Alberta’s capital city that it, along with Toronto, was chosen from 10 candidate cities to host the NHL playoffs.

“Edmonton was picked due to us being a lot safer than other cities and all the stuff that Albertans and Edmontonians have done to make this all happen,” Basil Hendsbee said.

He sees the tournament as one big TV tourism ad for his town.

“The more things they show the viewers at home what Edmonton has to offer, who knows?” Hendsbee said. “Maybe people will come after COVID is done and visit Edmonton and Alberta.”

How much can and will Edmontonians publicly celebrate their hub-city crown, given the constant messaging of social distancing and encouragement to stay home?

Games played in an empty arena and the teams walled off from the public, the citizenry won’t be a lot closer to the action than other Canadians watching at home on television.

Arriving from the south on the Queen Elizabeth II – known as the ‘QE2’ – the first indication of a major hockey event in the city is a four-metre-high, 340-kilogram Stanley Cup replica at the edge of a sports store parking lot.

Staff at United Sport and Cycle were unpacking not only Oilers gear, but jerseys, T-shirts and flags for all the participating teams Friday.

The store is banking on Edmontonians feeling free, or emboldened, to support more teams than just the Oilers with so many of the teams in town.

“They’re preparing to be a hockey fan and not just an Oilers fan. We see Toronto fans coming in even though Toronto’s not playing here.”

Hodgson is confident the NHL’s plan to contain the virus and finish the 2019-20 season in Edmonton will work.

“We had to actually make a delivery into the bubble because they needed some sock tape from us for the players to wear,” he said. 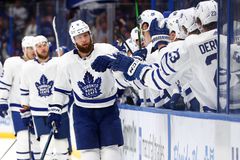 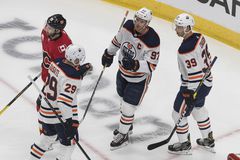