The federal government will issue a travel exemption to allow the winner of the NHL’s all-Canadian North Division and an American counterpart to cross the border during the third and final rounds of the playoffs.

Immigration Minister Marco Mendicino announced the decision on Sunday, hours before the Montreal Canadiens and Winnipeg Jets were to play Game 3 in their North Division final series to determine which Canadian team will advance in the hunt for the Stanley Cup.

“We felt confident we could take this decision, which will allow Canadians to enjoy one of their favourite pastimes, namely playoff hockey, while at the same time keeping everyone healthy and safe,” Mr. Mendicino told The Canadian Press in an interview.

The decision represents the culmination of weeks of work by the NHL, which was required to come up with a plan to protect the teams and public at large and getting approval for it from the Public Health Agency of Canada as well as provincial authorities.

“The playoff proposal ... was reviewed with a fine-tooth comb by all public health care officials,” Mr. Mendicino said. “I really want to emphasize that because they’re the experts, and they’re the ones in whom we place great faith and confidence before we even take this decision.”

The NHL’s plan, which Mr. Mendicino said has been approved by the Ontario, Quebec, Alberta and Manitoba governments, includes a number of rules and protocols that teams and players must abide by, including pre- and postdeparture testing whenever teams cross the border.

American teams playing in Canada and the Canadian team playing in the U.S. will also be required to quarantine in designated hotels and will only be allowed to visit the arena where they are playing. There will also be restrictions on who team members can interact with.

Canadian team members will be allowed to stay at their homes when they are in Canada, though the government says they will be subject to daily COVID-19 tests.

While Mr. Mendicino praised the NHL’s plan, he said the decision to grant an exemption also reflected rising vaccinations rates across Canada and the U.S.

“We’ve come a long way from where we were just two months ago, let alone a year ago,” he said. “And it’s thanks to the extraordinary work of our front-line health care workers and Canadians themselves who are taking up vaccines at an accelerated rate.”

The minister added that the government was prepared to step in should the league or any teams not abide by the plan.

Sunday’s announcement could be a reason for optimism for other professional sports leagues and tournament organizers, who have been champing at the bit to resume cross-border play and competition.

“We will take any other proposals from professional sports on a case-by-case basis,” Mr. Mendicino said.

The winner of the series between the Canadiens and Jets will face one of three American division winners in the league semifinals. Montreal led the series 2-0 heading into Sunday’s game.

This will mark the first time regular cross-border travel occurs in the NHL during the COVID-19 pandemic. Last summer, the NHL concluded its season with hubs in Toronto and Edmonton, with all American teams crossing the border just once before departing.

“The National Hockey League is very appreciative of the decision by the Canadian government and the federal health officials to allow the Canadian team that advances to the Stanley Cup semi-finals and, potentially, the final, to host games in their own rinks,” NHL deputy commissioner Bill Daly said in a statement.

“As we did during our return to play last August and September in the Edmonton and Toronto bubbles and throughout the 2020-21 regular season, we have again worked closely with [Public Health Agency of Canada], and the provincial and municipal health authorities to develop a series of strict protocols that will protect the safety of all concerned.”

NHL personnel were granted a special dispensation before this year’s trade deadline in April to serve only a seven-day quarantine.

The federal government also issued an exemption to the mandatory 14-day quarantine period for NHL players and team staff to return to Canada for training camp under “national interest grounds” in December.

The league put all seven Canadian teams in one division, and they exclusively played each other to avoid cross-border travel this season.

The NHL had said it was considering having the Canadian division winner relocate to the U.S. for the final two rounds if it could not secure approval from government.

Other Canadian professional sports teams have had to relocate to the U.S. to avoid cross-border travel.

Major League Rugby’s Toronto Arrows are now based in Marietta, Ga., while the NBA’s Toronto Raptors recently completed their season in Tampa, Fla.

Canadian pro teams in many leagues outside the NHL have a larger majority, if not a full complement, of rivals in the U.S., making cross-border travel a requirement if they are to play in Canada.

In the NHL, American teams have been allowed to have crowds throughout the playoffs. The Habs became the first Canadian team to host a crowd on Saturday when 2,500 fans watched them beat the Leafs in overtime.

The Leafs and Jets followed by allowing about 500 fully vaccinated health-care workers into their next home games.

The Canadian crowds have been significantly smaller than those permitted in most U.S. venues. 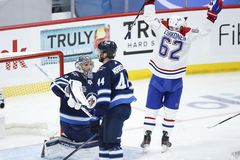 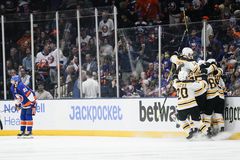