Mark Giordano has been a model of health for the last five NHL seasons, which made his absence at Calgary’s practice on Wednesday more glaring.

The Flames defenceman suffered an apparent leg injury late in the second period of Tuesday’s 3-1 loss to the San Jose Sharks. Giordano crumpled to the ice after contorting his body to attempt an off-balance one-timer. He remained on the ice briefly before hobbling to the bench and did not return.

Giordano has not missed a game due to injury since he tore his biceps tendon on Feb. 25, 2015 and was lost for the remainder of that season.

He has logged 377 regular-season games (and nine playoff games) since then. While he’s missed a total of five games over that period, none were because of injury — three were for rest ahead of the playoffs and two were due to a suspension.

“He’s not someone that, in my time here, you ever see down on the ice,” said defenceman Travis Hamonic. “You don’t want to see that happen ever to anyone, but to someone that never really shows pain or discomfort, or things like that, it’s a little worrisome.”

The team was calling it a lower-body injury. Giordano was not at the Saddledome Wednesday as he was underwent tests, which included an MRI.

Giordano leads Flames defencemen with 27 points (five goals, 22 assists) in 54 games. He also leads the team in average ice time at 23:57, more than two-and-a-half minutes more than Matthew Tkachuk, who is second.

While there was no word on how much time the 36-year-old might miss, players spoke Wednesday about what an extended absence would mean.

“You’re never going to replace the Norris winner, our best player, our leader, hardest worker,” Hamonic said. “When you go down the list, he’s at the top for everything. So, you’re never going to be able to replace a guy like that and I think everyone knows that, but at the same time, I think you have to keep pushing forward.”

The Flames are holding the second wild-card spot as of Wednesday.

Nashville, which is two points back but hold two games in hand, will be Calgary’s next opponent on Thursday when the Flames — with or without Giordano — will wrap up a three-game homestand in which they’ve lost the first two.

“One of two things usually happens,” said Ward when asked about the potential impact on his team. “You come together as a group. The guys step up together and they all start pulling on the rope a little more and it springboards your team into playing harder, playing better, and you’ve seen that a lot. You look at Pittsburgh this year, there’s a lot of teams have gone through it. Columbus, when they’re losing players they’re stepping up and they’re playing.

“Or the other way is to let it affect you in a negative way. So, we’ve got a decision to make.”

Calgary has not had an injury to a player on its roster since Dec. 17.

“Just about every team has to go through some sort of injuries to one of their top guys,” said centre Derek Ryan. “That’s just the way hockey is, it’s a long season, it’s 82 games and somebody’s going to get hurt. We have to deal with it, just like everyone else does.” 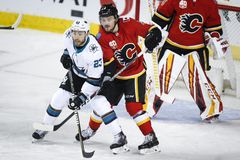