The Calgary Flames won a third straight game under new head coach Darryl Sutter with a 4-3 victory Monday over the visiting Edmonton Oilers.

Noah Hanifin scored the game-winner for Calgary (14-12-3) with Elias Lindholm, Dillon Dube and Andrew Mangiapane each contributing a goal and an assist to the victory.

Mikael Backlund assisted on a pair of goals and Jacob Markstrom stopped 28-of-31 shots for the win.

Sutter replaced Geoff Ward, who was fired March 4, and is 3-0-0 behind Calgary’s bench. The Flames have yet to trail in a game under the veteran coach.

“It’s a great sign,” Hanifin said. “Guys are starting to play to their roles, compete and work hard and play a full 60 minutes. That what you need.

“We’ve got a deep team and I think we’re doing a good job of utilizing everybody. It feels good to be winning, for sure.

“It’s been up and down for us this year. Obviously we’ve dealt with some adversity. With Darryl coming in and stuff, I think we’ve rebounded pretty well and put together a few big games.”

Mike Smith had 23 saves in the loss.

The Flames are at home to the Oilers again Wednesday. Edmonton leads the season’s Battle of Alberta 3-2 with five games remaining between the two clubs.

The Oilers hold down third spot in the all-Canadian North Division. The Flames were two points back of the fourth-place Montreal Canadiens and five back of Edmonton.

“We’re still behind the 8-ball,” Sutter said. “If this was our last game of the year, we could say we won, but we didn’t make the playoffs.

“We’re trying to find a way to get more solid, create more opportunities and spend less time in our zone. There’s lots of things we can get better at.”

The Flames and Oilers traded goals in a 67-second span early in the third period Monday, but the Flames led 4-3.

Edmonton pulled Smith for an extra attacker, but couldn’t produce the equalizer.

Draisaitl drew the visitors even at 5:25. The German roofed Connor McDavid’s drop pass under the crossbar.

A five-goal second period followed a scoreless first at the Scotiabank Saddledome.

Archibald tipped Devin Shore’s pass from the boards upstairs on Markstrom at 17:07. Mangiapane gave the hosts a 3-1 lead at 13:45 on a goaltending gaffe.

Smith left his net to play the puck behind the goal-line, but turned it over to Milan Lucic. Smith didn’t get back in time to cover the angle as Mangiapane whipped the puck by the goalie’s right arm.

Larsson halved a two-goal deficit at 9:49 banking his own rebound off Markstrom’s pad and into the net.

Lindholm scored off the rush at 8:57 when he rifled an Oliver Kylington feed by Smith.

Dube produced the first goal of the game at 5:25. Lindholm knocked the puck away from McDavid in the neutral zone and fed Dube to beat Smith between the pads.

“Three of the four goals were a couple of poor reads and a couple turnovers, so our fingers are all over the goals we gave them,” Oilers head coach Dave Tippett said.

“We made some mistakes to get behind, we got ourselves back in the game and then we made another mistake to give it away.

“There’s some lessons to be learned from that game and we’ve got to be better come Wednesday night.”

Kylington left the game in the first period after taking a Jujhar Khaira elbow to the head. Khaira and Flames forward Brett Ritchie fought a few shifts later.

Khaira needed help to the bench and down the tunnel and did not return to the game. Kylington was back on Calgary’s bench before the end of the period.

The Flames improved to 12-0-0 this season when leading after two periods ... Draisaitl extended his point streak to seven games (seven goals, five assists) and McDavid to six (three goals, 10 assists). 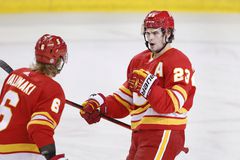 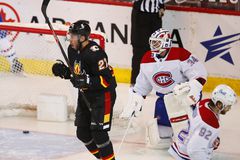 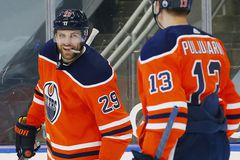